Taking a Lead with Sustainability

How the Egg Farmers of Alberta is tackling sustainability, including a peek into PEEP 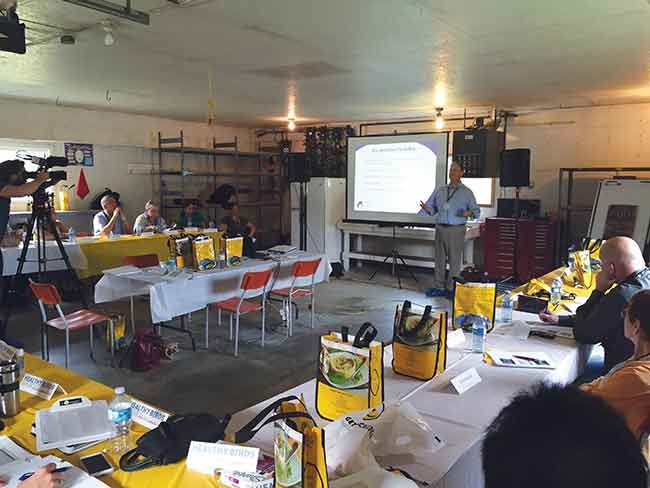 In late August, EFA hosted an “Environmental Stewardship Workshop,” which brought together members of the province’s entire egg supply chain, from farmers and graders to retailers and restaurants

Egg Farmers of Alberta (EFA) has always considered itself a pioneer, and right now, it is proving that as one of Canada’s poultry industry boards leading the way with sustainability.

“Farmers, EFA board members, the staff, we all believe in sustainability,” says Jenna Griffin, EFA industry development officer. “We all believe in improvements with our environmental impact, but we also understand that there are always trade-offs and interconnections. Every board policy decision, every on-farm decision, they all need to be socially responsible, environmentally sound and economically viable. It’s about finding the sweet spot.”

In February of 2014, EFA launched the Canadian egg industry’s first environmental initiative. The Producer Environmental Egg Program (PEEP) uses the Environmental Farm Plan as a starting point. This voluntary program helps producers identify the impacts of their operations on the environment and also leads them towards an increased use of industry best practices.

The PEEP assessment consists of ten questions (see sidebar for more) on key impact areas such as energy use, water consumption and manure management. EFA field staff work with egg farmers to complete the assessment, which typically takes about half an hour to complete. Recommendations for improvement are given by EFA, based on the gaps discovered and opportunities identified. Griffin says every producer in the province participated last year, over 160 in all. “We’ve done over 130 follow-up re-assessments this year, and there has been widespread improvement in scores,” she notes. “The average score in 2014 was 60, which is a pass, and now it’s 68. We set a goal of having at least ten producers below 60 have a score above that this year and we’ve more than achieved that. It is an annual re-assessment so the hope is that there is improvement every year on each farm.”

At the same time there is hope that each farmer makes changes each year to reduce his or her farm’s environmental impact, Griffin says EFA recognizes that cost and other factors come into play. “Again, it’s about the sweet spot,” she explains. “Energy-saving practices are a large part of PEEP, and there are some low-hanging fruit for many producers – changes that they can easily make – but we also recognize the fact that it’s not always wise for a farmer to upgrade an old facility that’s going to be replaced in the near future.”

Griffin notes that 11 of the follow-up farms switched to LED lights. This means these producers are using less electricity from the grid, which is a benefit to everyone and the environment, and also saving money in the long term. “We estimate that lighting changes on these farms totals about 41 300 kg of carbon dioxide emissions reduction,” Griffin says. Based on the U.S. Environmental Protection Agency’s ‘TRACI’ methodology, 1 KWh = 1.02 kg, so this equates to a savings of 40,490 KWh.

Two of the ten PEEP assessment questions relate to manure management. Griffin says several farms missed out on full scores because while the producers are composting, they are not using the best practices that are involved in more tightly-controlled manure management. The PEEP manual includes an education program about how to get there – how to better manage compost moisture content, when to test, when to turn – but there could be constraints as well. “We know farmers are taking a look at this, but we also realize that layer manure management is integrated on some farms with manure from other livestock,” Griffin explains, “so these things can affect scores on management and storage.”

INVOLVING ALL STAKEHOLDERS
In late August, EFA hosted an ‘Environmental Stewardship Workshop,’ which brought together members of the province’s entire egg supply chain, from farmers and graders to retailers and restaurants. Personnel from various private companies, government agencies and non-governmental organizations also attended. An update on PEEP was presented, as well as EFA’s inaugural ‘Sustainability Report.’

“The workshop was a result of sustainability strategy planning,” says Griffin. “It’s another step towards more accountability and integration. It was our first effort at formal stakeholder engagement, and we wanted to start with the environment as we’ve just launched PEEP, but we also wanted to hear from, and be more connected to, the whole egg value chain.” She says the workshop has served as part of developing a platform for communication within and outside the industry, an opportunity to provide details and to tell stories around the numbers. “It’s not just about whether the average industry score was 60 or 68 with PEEP for example, but rather how has it impacted individual farm operations,” she says, noting that although the focus was on environmental stewardship, there was a great deal of important discussion among all the participants about the trade-offs between environmental stewardship, animal welfare, food safety, economics and more.

“On the second day, we heard from many attendees that these discussions matter,” says Griffin. “Strategies around sustainability must focus on more than the environment, since it’s all integrated. The fact there is a lot of diversity out there in terms of every farmer being in a different position with incorporating sustainability was also reinforced. It’s the same with every step of the value chain – every level is focussed on different audiences, which can be both a barrier and an opportunity.” She adds, “It was really positive that there was a strong willingness to share the story of sustainability together, even if there are some processors, retailers or food service chains that are in competition, since they all want to highlight sustainability. We know we all win if consumers feel comfortable purchasing our products.”

A workshop report has been produced and distributed to all stakeholders. In terms of next steps, Griffin says a strategy for the whole industry must be developed. “Several paths forward were given, and there are relationships that will become stronger,” she notes. “Scientists, for example, want be more engaged with on a technical level with what’s happening with sustainability at various points in the value chain. For our own part, EFA also needs to come up with a stronger stakeholder engagement strategy. The awareness of what we do and how we do it needs to be better, and it’s a lesson for associations across the country.”

Susan Schafers, Chair of the EFA Board of Directors, is very pleased with how the workshop went. “We’re taking a step out and getting input from people outside the direct on-farm end of the industry and that’s important,” she says. “It’s going to take some time to tie it all together, and we want people who have an interest in this to continue to come forward. We are confident that will happen.”

Example question from  EFA’s PEEP questionnaire
A perfect score for the entire assessment would be 100, with 60 presently considered “a pass.”