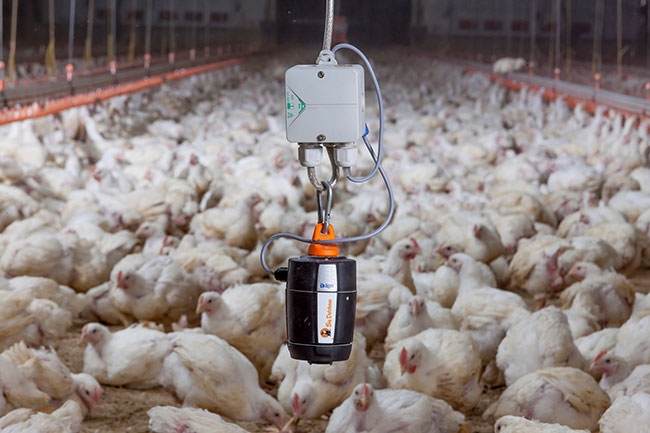 DOL 53 constantly measures ammonia concentrations. When levels get too high, a message is sent to the user’s smartphone

Poultry production generates dust, ammonia and odour emissions that have the potential to impact air quality both within the barn and in the environment.

The subject of emission control was addressed at EuroTier, the world’s largest trade fair for animal production, in November 2016. The fair takes place every other year in Hanover, Germany.

The most recent edition of EuroTier offered a special exhibit with the goal of providing information about indoor emission control measures for minimizing those dust, ammonia and odour emissions.

The companies that exhibited products all claim to provide alternative solutions to exhaust air purification, as well as offer health and welfare benefits to both animals and humans.

TECHNOLOGY
Some methods to reduce emissions in poultry housing involve the filtering or scrubbing of exhaust air before it leaves the building. The EuroTier exhibit, however, looked at indoor solutions that could be used as an alternative to air cleaning.

If effective, these solutions have the potential to improve animal welfare, environmental conditions and the working conditions of those who work in the barn.

Most producers, he said, find this to be too expensive and not worth the cost. ExTox Gasmess-Systeme has designed a new ammonia sensor, NH3-Stable, that addresses this problem.

The innovative filter measures air quality for five minutes every one to 12 hours, depending on the user’s specifications, and is exposed to filtered air in between readings. This allows the NH3-Stable to overcome the main limitation with traditional sensors: aging due to exposure to ammonia. The sensor has a lifespan of more than one year, and according to Baer, produces stable results.

The benefit of using the NH3-Stable sensor is that it makes running ventilation at 100 per cent unnecessary, which has the added benefit of reducing overall production costs.

Baer said that NH3-Stable is particularly useful in barns located close to residential areas, where regulations require farmers to control and measure emissions. “Our device is perfect for this,” he said.

The device, which has a lifespan of three to four years, measures emissions every five to 10 seconds. The sensor needs a power supply, but can be connected to the climate computer, explained Andreas Boeske, head of marketing communications at Big Dutchman.

DOL 53 constantly measures ammonia concentrations. When levels get too high, a message is sent to the user’s smartphone. Knowing in-house ammonia levels allows producers to take action before those levels become too high, Boeske said. The device is much better than its primitive predecessor: the human nose.

While DOL 53 is sold by Big Dutchman, the sensor was designed by Dräger. To learn more about how DOL 53 works, you can watch a short YouTube video at https://goo.gl/3fuyG9.

Heating pipes, which run every 15 centimetres across the width of the house, are heated using 35°C water. The system requires little energy to heat, and according to Björn Prüllage, assistant to management, the flooring provides uniform heating without leaving any cold spots.

“The IN-System is operating with warm water in closed tubes under the floor, so there are no carbon dioxide emissions in-house using this heating system because there is no burning or open flame,” he said.

Because the piping is laid out under the floor, warmth rises through the floor, right where the birds need it most. “The floor level temperature is about 29.5°C, and the rest of the house could be colder,” Prüllage said. “Furthermore, the warm water has a low temperature level [of] about 35°C, so low energy is necessary to heat up the water, which saves energy costs.”

FEED
Another route for tackling emissions in poultry production is through the feeding regime. Excess ammonia can suggest inefficiencies in the birds’ diets – a problem that can be addressed through feed additives and customized feeding.

“We have enzymes and amino acids that can improve strongly the efficacy of feed conversion with the result of reduction of phosphorus and nitrogen emissions,” Bartelt said in a recent interview.

“In broiler nutrition, the usage of L-valine is a very new approach,” he continued. “In many broiler diets, valine is – after methionine, lysine and threonine – the fourth limiting amino acid. A crude protein reduction of about one percentage point is possible by inclusion of L-valine into broiler feed.”

One per cent less crude protein equals a 10 per cent reduction in ammonia emissions, Bartelt said. To learn more about the benefits of L-valine, visit kaesler.de/en/products/l-valine/.

Digestarom by Biomin: Stress, such as a change in diet or challenging housing or environmental conditions, can lead to all sorts of problems in poultry production, namely decreased appetite, poor digestion and poor nutrient uptake.

Furthermore, these issues can lead to an imbalance of gut microbiota. According to Michael Noonan, Biomin global product manager (phytogenics), a well-balanced gut is key to protecting animals against enteric diseases and increasing health and performance.

Digestarom, a phytogenic designed by Biomin, is a flavouring substance that is designed to increase palatability of feed and decrease both aerobic and anaerobic microbial counts in a bird’s gastrointestinal tract.

How does this improve emissions? According to a trial conducted on a broiler farm in Germany, adding Digestarom to a base diet of pelleted cereals and soy led to better air quality in the barn (-12.12 per cent) and significantly lower ammonia emissions (-11.71 per cent). Its inclusion was also shown to lower total nitrogen in the litter by 8.01 per cent.

DOL 53 constantly measures ammonia concentrations. When levels get too high, a message is sent to the user’s smartphone

FLOOR
Bedding materials and additives that can be used on the floor were also included in the special exhibit at EuroTier. Some were simple bedding solutions treated to prevent dust creation.

Others were more complex solutions, such as bedding materials that are meant to capture ammonia and other odour-causing compounds.

Zeta poultry litter by Gordes Zeolite: The build-up of unpleasant odour, caused by ammonia in urine, is one of the most common and serious health problems encountered in poultry barns and other agricultural buildings that house livestock.

The chemical reaction of water and urea produces ammonium and carbon dioxide, Akgül explained. Zeta adsorbs the moisture on the base plate. This maintains a dry environment and therefore reduces emission in poultry production.

“Zeta is a 100 per cent natural product that can be used on its own, or mixed with other bedding materials,” Akgül said. “It has a very high water retention capacity, can adsorb ammonia gas due to ammonia gas selectivity with its ion exchange feature and can initiate both of these two positive effects on a bedding material.”

More detailed information can be found at gordeszeolite.com/animal-litter-and-beddings.

BEYOND EUROTIER
Researchers at the University of Delaware are also working on lowering ammonia and greenhouse gas emissions from poultry houses. Specifically, they’re looking at how adding alum to poultry litter can reduce ammonia concentrations and greenhouse emissions.

The researchers, including Hong Li, assistant professor in the department of animal and food sciences, knew that ammonia and carbon dioxide were the two bi-products of uric acid being broken down by microbial activity.

They also knew that alum could be used to slow microbial activity, thereby reducing overall emission. What they didn’t know was its effects on greenhouse gases. But they thought if they could lower ammonia emissions they could lessen the need for ventilation. They were right.

Producers using acid-based litter amendments can reduce greenhouse gases that are produced through ventilation and fuel used for heating. Constant ventilation is not necessary when ammonia emissions are under control. The research was recently published in the Journal of Environmental Quality.