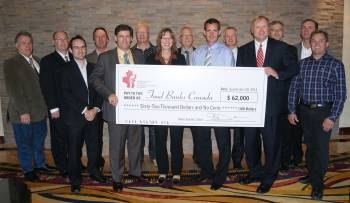 The Turkey Farmers of Canada (TFC) Board of Directors presented a cheque for $62,000 to Food Banks Canada at their general business meeting, held in Toronto September 22.

The third annual donation of over $50,000 will assist thousands of Canadian families. The funds will be distributed in September to many rural food banks across Canada, targeted to those most in need. Those food banks selected will purchase whole turkeys or turkey parts for their community, for distribution at Thanksgiving. The cheque was presented to Food Banks Canada’s Vice-Chair Brian Meagher, and Executive Director, Katharine Schmidt.

“We wanted to continue our partnership with Food Banks Canada,” said TFC Chair, Mark Davies, “because we know that the holiday period is a time when families come together to celebrate, yet many families are struggling.” Since 2009, TFC has donated $50,000 annually to Food Banks Canada.  The Turkey Farmers of Ontario, Manitoba Turkey Producers and Turkey Farmers of New Brunswick have also contributed funds in 2011, raising the overall total donation to $62,000. In addition, a number of provincial turkey boards make contributions to food banks in their regions throughout the year by participating in local food drives, donating turkeys during the holiday seasons, and collaborating on fundraising events.

“Turkey meat is an excellent source of protein that our community so desperately needs,” says Katharine Schmidt, Executive Director of Food Banks Canada. She stressed “so our member food banks are thrilled to be chosen to receive this support from Turkey Farmers of Canada.” Schmidt went on to say, “more help is always appreciated, so anyone wishing to contribute a turkey to their local community food bank can do so in person or by donating online at https://secure.supportfoodbankscanada.ca/DonateGen.aspx?L=2&CCID=27&MSP=126″.