Atlantic Canada is now the home of Canada’s newest and most advanced
poultry research facility. The first phase of the $9.8-million,
3,000-square-metre Atlantic Poultry Research Centre (APRC) officially
opened on May 30th at the Nova Scotia Agricultural College (NSAC)
campus. 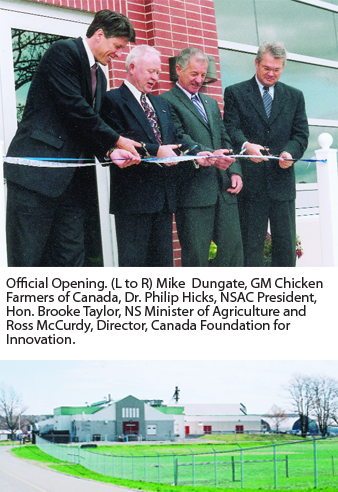 Atlantic Canada is now the home of Canada’s newest and most advanced poultry research facility. The first phase of the $9.8-million, 3,000-square-metre Atlantic Poultry Research Centre (APRC) officially opened on May 30th at the Nova Scotia Agricultural College (NSAC) campus.

Dr. Rathgeber, an Agriculture and Agri-Food Canada poultry research scientist at the NSAC’s Atlantic Poultry Research Institute (APRI), started the tour in the centre’s Chicken Farmers of Canada meat production wing, which has a suite of four broiler production rooms.

Each room in the broiler suite will hold up to 640 birds, with 16 cages for up to 40 broilers per cage. The broiler suite has completely natural, fresh air ventilation to replicate normal commercial broiler production.

Besides its air conditioning, the suite’s relative humidity can be controlled from as low as 40 per cent to as high as 95 per cent. Ammonia and CO2 tanks will inject gases into the production room air system to simulate conditions of poor ventilation in air that is refiltered and recirculated.

The APRC will also have the capacity, said Rathgeber, of replicating lighting programs and heat stress in a range between 150C and 400C.

Once broilers leave their production suite, they are placed in an air lock between the production and meat processing suites to minimize airflow for biosecurity purposes between the two suites.

After they enter the processing suite, they are hung on a kill line, electrically stunned and then bled out. Rathgeber said future plans envision a gas stunning chamber, allowing the  APRC to perform research on the two primary stunning options for poultry.

Following slaughter, the carcasses are placed in a batch scalder where 600C hot water loosens their feathers. They are then tumbled in a stainless steel plucker with protruding rubber fingers inside its rotating steel drum that removes the feathers. It then ejects the carcasses into a chute, which feeds them into the adjacent, self-contained eviscerating room.
The oval, overhead eviscerating line has compressed air-driven hand tools – head cutter, lung gun and button hole cutter – that workers use to eviscerate the broilers. Rathgeber noted the eviscerating line also has sterilizing receptacles for the knives workers use at their work stations.

The eviscerating line can handle up to 10 birds a minute, with processing and evisceration taking place every six weeks at the APRC, he said.

Offal is deposited into a stainless steel trough beneath the eviscerating line which is borne away by a closed conveyor at the end of the trough to the next door offal handling room which has a truck loading dock for vehicles that will carry the offal to a local rendering plant.

After evisceration, the broilers are taken to the chilling laboratory suite where researchers will have the option to either air chill or chill with ice water depending on “what the research project calls for,” Rathgeber said.

The APRC also has a blast freezer room, next to the air chilling lab, which can freeze 2,000 carcasses in 24 hours.
Rathgeber also mentioned that all rooms in the meat and egg production and processing suites have video surveillance cameras that feed into a video lab room used for poultry behavioural and welfare research. This video lab is also connected to an Internet website, which researchers with a password can access from anywhere in the world to monitor the birds or control their environmental conditions.

In the egg production wing, the largest room has 24 rows of three-tier housing, built by Specht of Germany, with a capacity of 2,880 birds. Each cage has 80 square inches of area, which is larger than the current industry standard.

There are egg collection belts on each tier that can be turned on at different times to avoid mixing eggs from each tier. A moving, top-fed feed hopper beside the housing will feed different feed mixtures. This was designed by the researchers to allow six different feed bins outside of the APRC building to supply rations by overhead conveyor to each of the 24 rows in the egg production room.

The egg production suite will be in-floor heated and climate-controlled, not at the mercy of  outside temperatures, with any outside air being tempered, the goal being to keep its temperature stable over its entire production cycle. Rathgeber said, “When monitoring the bird’s performance; you do not want it compromised by fluctuations in temperature.”

The battery cages in the largest egg production room, he observed, are unusual in that each cage has its own individual bottom.

The APRC also has a suite of eight smaller rooms, each of whose environment can be individually controlled and altered, where researchers can also experiment with different cage options, including floor housing environments, said Rathgeber.
He also noted the APRC has a Colony Cage Room with a cage design similar to the enriched cages now replacing battery cages in the European Union.

A Colony cage, said Rathgeber, is eight times the size of the current battery cage and it will house 35 hens and a couple of roosters. It will also have perches for the birds, nesting box to lay their eggs, a dust bathing area and claw shortening devices.

The Colony Cage Room will hold the APRC Heritage Flock and breeding flocks, a total of 420 hens and 60 roosters.

An adjacent room will be for multiple use, where chickens can be raised either on the floor or in mobile cages.

The eight-room controlled environment suite contains 16 mobile pullet cages and 16 mobile layer cages that can be moved as required for research purposes between the suite’s rooms.

Each portable cage can hold 48 birds. With each room containing two cages, at full capacity the eight-room suite will hold 768 birds.

Rathgeber noted the lighting in the meat and production areas is dimmable fluorescent to save energy and the walls are coated with an impermeable finish that can be easily washed down and  disinfected in case of a disease outbreak.