To Trim or Not to Trim? That is the Question! 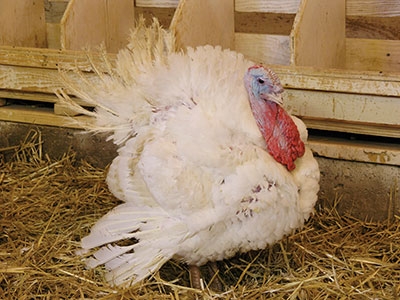 Researchers at the University of Saskatchewan are studying the effects of toe trimming on turkey welfare and productivity.

The University of Saskatchewan has been examining the impact of microwave toe trimming on the productivity and welfare of commercial turkeys – both in hens (Experiment 1) and in toms (Experiment 2). As part of her M.Sc. candidacy, Jocelyn Fournier led the turkey tom research.

In Fournier’s work, nine replicate pens of 17 commercial Hybrid Converter toms were grown to 20 weeks of age. One-half of these toms were trimmed (T) using the Nova-Tech Microwave Claw Processor at a commercial hatchery on day of hatch, while the other half were untrimmed (UT), but sham treated on the same equipment.

As well, the birds were followed to the commercial slaughterhouse, where their carcasses were examined for scratching and lesions.

Feed consumption differed during the first seven days, with the T birds consuming less feed (0.117 kg) than the UT birds (0.133) – which may be indicative of pain or an unknown sensation in the toes. However, the seven-to-14-day period showed no difference in feed consumption, indicating that the earlier effect was short lasting.

Feed consumption was reduced again for the T birds late in the experiment and could be related to their reduced growth rate at this time. No differences in feed efficiency were noted throughout the trial.

Behavioural monitoring indicated that UT birds were more lethargic on day one and spent less time inactively resting, but more time feeding, standing and walking. Similar results were shown at three and five days of age, which were proven to be significant or approaching significance.

This change in behaviour corresponds to the reduced feed intake of the T birds noted above, with a similar interpretation of pain or abnormal sensations in treated toes. Behavioural observations at 133 days found no differences, except that T birds stood more (27.1 per cent) and walked less (4.6 per cent) than UT turkeys (24.1 and 5.6 per cent, respectively).

However, gait score measured at seven, 11, 16 and 20 weeks of age did not differ between the treatments.

As turkeys age and their size increases, shorter toes on T birds may result in an inability to maintain balance. In order to assess balance, Fournier measured the angle between a horizontal line through the point where the breast meets the leg, and a line from that point following the line of the breast.

No differences were noted between toms of the two treatments in this study; however, a significant change occurred as the birds aged, regardless of treatment.

Finally, the level of scratching on the carcasses did not differ between treatments. This is in contrast to the data found in the hen flock, where UT carcasses had significantly more severe scratches than the T carcasses.

Fournier concludes that, based on this study focusing on productivity and welfare, toe trimming of heavy turkey toms may not be necessary.

This new regular series of articles is part of the communications plan of the Poultry Welfare Centre. For more information, visit the Canadian Virtual Centre for Poultry Welfare at http://poultrywelfarecentre.ca.

Related
The Beaker: November 2013
PIC Update – October 2013
The Beaker: May 2014
To Trim or Not to Trim?
Editors’ Picks
Digital Edition