The benefits of in-floor heating

A look at the benefits and cost of warming barns from the ground up. 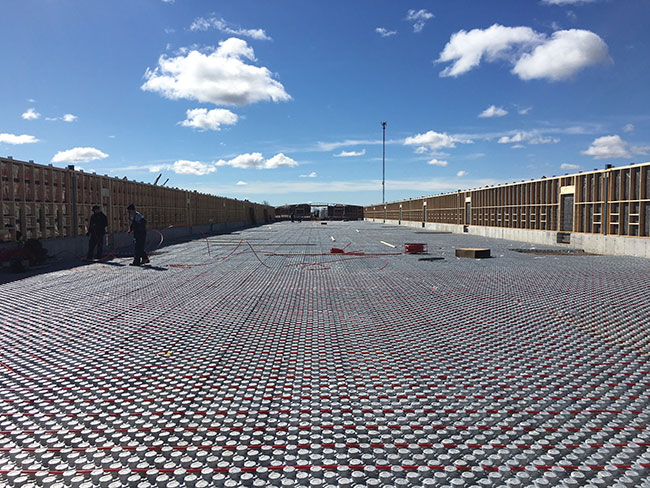 Proponents of in-floor heating say it’s an effective solution for broiler production because it provides even heat distribution that warms the barn closer to where the chickens are located.

There are few Canadian poultry farming families more experienced with the many types of heating than the Cornelissens in Watford, Ont. To keep their broiler flock warm, they’ve used everything from box and thin pipe heaters to in-floor and hydronic heating.

In 2002, they built a new barn and became the first poultry farm in Canada to use geothermal technology as a heat source. But without hesitation, Kyle Cornelissen will tell you he prefers hydronic and in-floor heating. The benefits, he said, outweigh the costs. And they’re not alone.

Heat: The cold facts
Temperature plays an important role in terms of development and weight gain in broiler chickens. In poorly heated barns, growth can be stymied as birds utilize energy to stay warm rather than to put on weight.

How the barn is heated depends on barn design and the type of heating system that’s installed.

In a broiler barn, the benefits of heating the floor directly beneath the birds are clear. Heat is distributed precisely where it’s needed most, minimizing energy loss and improving energy efficiency. Producers who’ve opted for this system say it’s a good investment, as it’s designed for longevity.

In-floor hydronic heating
To create hydronic heat, special tubing is embedded in a concrete foundation. Hot water, which is heated in a boiler in a separate room outside of the main barn in most cases, flows through the tubing to warm the thermal mass flooring. Hydronic systems can be fixed with a number of boilers, including wood, oil, natural gas or solar heaters.

From a builder’s perspective, one of the big benefits is ease of installation. While some builders opt to zip-tie PEX tubing to wire welded mesh and then pour concrete over top of it, a product from Amvic Inc. makes the process even simpler.

Amvic manufactures expanded polystyrene insulation material. Eight years ago, they introduced an insulated panel that holds PEX tubing. The Ampex Insulated PEX Panel interlocks and can be installed without a vapour barrier. Since PEX tubing easily locks in the panel, installation is as easy as walking the tubing in place.

“It’s designed so that as it holds PEX tubing it’s at a more optimum space than just laying it on top of the insulation,” explains Gary Brown, vice president, Amvic. “It actually allows concrete to flow around it, which gives it better thermal properties.”

The benefits of using hydronic heating in poultry barns include lower humidity levels, lower CO levels and better overall health, Brown says. Since heat loss is minimized, radiant floor heating is considered to be more energy efficient too. While it does take time to heat the thermal mass of concrete, once it reaches the desired temperature it stays there, Brown says. 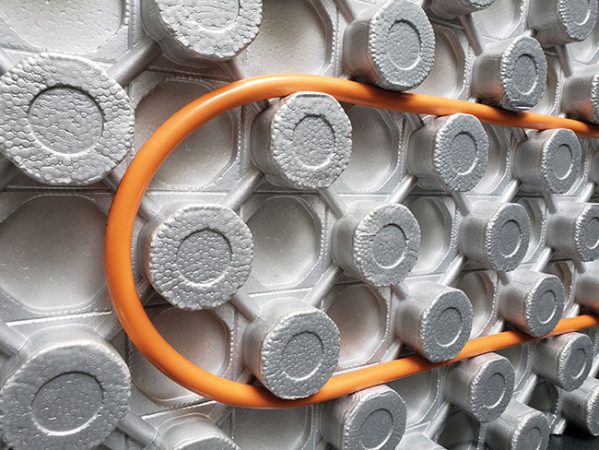 The Baas family
Although Wilma and Tony Baas of Russelview Farms Inc. in Russell, Ont. have been farming since 1991 when Tony bought the farm from his parents, they didn’t start in broilers until 2014. As first-generation broiler farmers, they wanted to see as many barns as possible before they built their own.

They were just about to give the go ahead on a conventional barn when they visited another farm near their home. The barn had in-floor heating and a cathedral ceiling. Wilma notes the air was clean and the floor was dry.

“We went to other barns too with the flat ceiling – it was eight or nine-feet high and it was darker and the air was very dense,” she says. “It was hard to breathe.”

Fernand Denis, a local contractor, designed and installed the system in the couple’s 400 x 64-foot barn. He stapled plastic tubing to two-inch Styrofoam, and then put the cement on top. The line is tough, Tony says, and should last forever.

For ventilation, the chicken produers went with a system from Hotraco Agri in The Netherlands.

The propane-fuelled boilers are situated inside the barn, but in their own room to improve safety and biosecurity. Using propane significantly lowers fuels costs, Tony says.

The Baases say there are several benefits to their system. In-floor heating produces even heating across the floor. Although they don’t have to use shavings, they use a little because the chicks like it. They save on the cost of shavings, as well as on the cost of heating. Cleaning the floor between flocks is a bit more difficult with fewer shavings, though.

“We priced it out and compared it to other barns,” Tony says. “Last winter we kept track of what it cost us in propane compared to other barns, and we were half the cost.” Last year, they paid $0.02/kilo of bird weight, on average.

The barn does not require an exhaust system either, as there is no CO2 in the barn. This saves them from further heat loss as well.

The floor takes around two days to reach the desired temperature, and it can be trickier to get the temperature right in summer when the outside temperature is higher than the desired floor temperature. But the couple has found ways to work around these issues. For example, they learned that closely watching the return temperature allows them to better control the actual temperature of the floor.

Another benefit of in-floor heating, Tony observes, is that the manure stays drier in the barn. This, they believe, has lowered ammonia levels and minimized footpad issues.

The Cornelissens
George Cornelissen started broiler farming in 1994. At that time, he had two double-decker broiler barns. One was equipped with box heaters, and the other with thin pipe heaters, the latter of which uses hot water to heat the barn. The system is 70 years old, but still runs well, although air distribution isn’t great.

Today, he manages six barns that hold 98,000 roasters together with his son, Kyle. Each barn uses a different system for heating.

In 2002, the Cornelissens built a new barn, which they designed for geothermal. The 32,000 sq. ft. barn holds approximately 22,000 roasters. While the in-floor heating system uses geothermal heat, the barn is equipped with box heaters as well. The systems are run together because in-floor heat is really slow to react to temperature changes, Kyle explains.

“On a cold night when the temperature drops hard, the floor heat will respond too slowly,” he says. “To speed up that constant heat we have the box heaters to bring up the temperature quicker so the birds don’t get chilled.”

When asked why they didn’t just use the box heaters, Cornelissen says the exhaust that comes out of the box heaters contains carbon dioxide, moisture and heat.

“We don’t like to have that environment with the extra CO2 and moisture in the barn,” he explains. “It brings up our humidity too high and we have to exhaust all that air out of the barn. In the wintertime, when we have to exhaust more air it costs us more in heating charges.”

“With hydro prices slowly creeping up, it didn’t make sense to continue to run it,” he says.

Instead of using the geothermal units, they run in-floor heating using a natural gas boiler.

The last two barns they built in 2016 and 2019 are equipped with a fireproof room that holds the boilers outside of the barn. “Everything we do in the new barns is all hot water heat,” Cornelissen says. “We still have the in-floor heat, and then for the constant heat, we have the hydronic heaters.”

Each 32,000 sq. ft. barn is outfitted with five hanging hydronic heaters, and they have 1.15 million BTUs for heating the barn. All the boilers are in a room right beside the barn, which is up to fire code. Currently, this is not a requirement in Ontario, but the Cornelissens believe it will be in the short term.

Experience has taught the Cornelissens that in-floor heat using boilers and hydronic radiators is the best option on their farm. Kyle says it’s all about the quality of the heat, which is clean.

“You’re not adding any more moisture or CO2,” he says. “In return, our humidity levels are lower, and we don’t have to exhaust as much air to keep the CO2 down.”

The biggest drawback to hydronic and in-floor heating is the cost to build. Cornelissen says it’s one of the more expensive options. Per barn, he estimates they spent $70,000 for the in-floor heating and hydronic heaters.

“But longevity – I feel like we can get 40 years out of the system, and hopefully more,” he said.

By comparison, for the same sized barn, Cornelissen estimates both thin tube and box heaters set him back just $10,000. Box heaters and tube heaters, he says, will last about 15 years before they need replacing.

Beyond the cost to build, though, there’s still the cost to run the equipment to consider. Each year, gas costs about $0.01/kilo (bird weight), which is standard for all barns, Cornelissen says.

“The big thing we’re looking for is longevity,” he explains. “That’s kind of what we sell ourselves on – simplicity. It’s a very simple system. We know it’s going to last us a while.”