The benefits of sprinklers in poultry barns

Cooling technology offers many paybacks for producers and their flocks 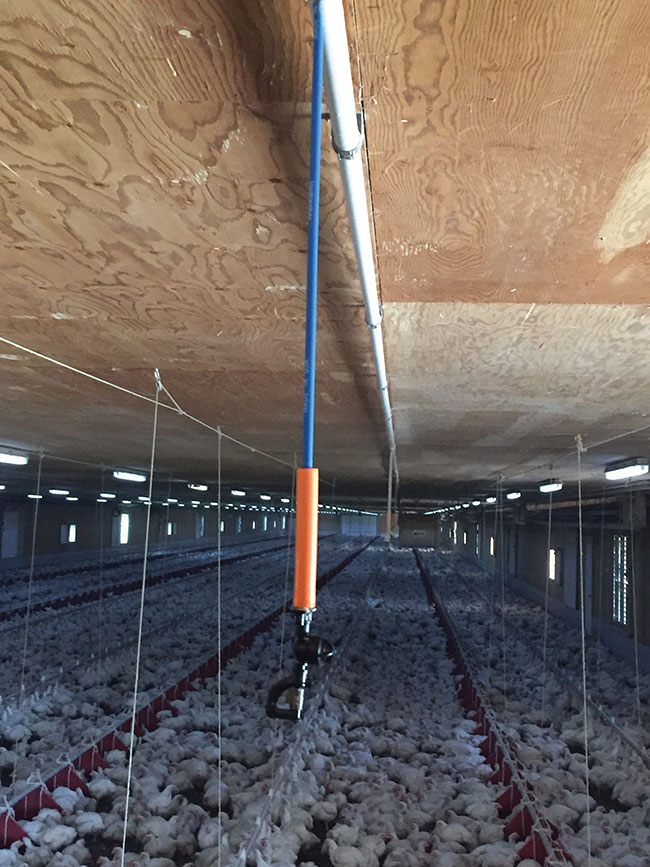 Sprinkling chickens offers multiple benefits, including a dramatic reduction in cooling water use along with lower house humidity levels.

Using sprinkler technology to cool broiler chickens is a concept many in the poultry industry find difficult to accept. However, sprinkling chickens offers multiple benefits, including a dramatic reduction in cooling water use along with lower house humidity levels. In addition, there is an increasing pool of evidence that performance among birds raised with a sprinkler system is comparable to birds raised with cool cell systems.

If they are unable to remove heat and moisture fast enough, their body temperature will rise and they eventually “drown” from the excess moisture and heat load. It is not uncommon for the humidity level in a house with cool cells to be 90 per cent, whereas a sprinkler house may have a humidity level lower than 70 per cent.

Concept behind sprinkling
Few in the poultry industry understand the sprinkler concept. It’s a totally different thought process than cool cells and you must accept that to be successful. Sprinklers cool individual chickens. Cool cells cool the environment the chickens live in. With sprinkling, tunnel fans pull air across the birds, allowing the wind-chill effect to fool chickens into thinking the house is cooler than it really is.

It’s the same principal as if you jump in the creek on a 37°C summer day when there’s a breeze blowing. When you get out, the breeze evaporates the water off your skin and it feels pretty good until the water evaporates and it’s time to jump in the creek again. It’s still 37°C, but you don’t think it’s 37°C.

In addition, when the birds are sprinkled, they stand up and move around. Once up, often the birds seem to be of the opinion “Well, I’m up, I just as well go get something to eat and drink.” Many of them will move to the feeders and drinkers after being sprinkled. This standing up also releases trapped heat between birds, which can then be removed by the fans. 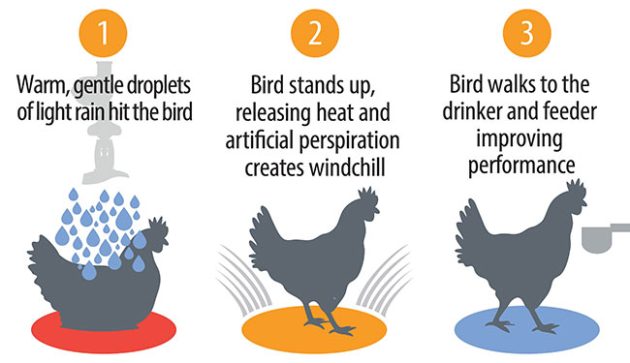 This cartoon shows the concept behind sprinkling.

House must run hotter
For the sprinkler system to be most effective and achieve a lower house humidity, the chicken house must run hotter than you are used to with a cool cell system. This scares many people and it used to scare me as well. However, I’ve been involved with sprinklers in one form or another for over 20 years and I have found the technology works well when managed correctly and that bird performance is as good or better as with cool cells.

In summer, the temperature in a poultry house with cool cells usually runs around 29°C. In most cases, panic sets in if the house temperature goes above 29°C, but humidity may be near 90 per cent or higher. While a house with a sprinkler system must run hotter, humidity is lower because as temperature rises, humidity decreases and chickens maintain performance.

When using sprinklers, I want the air temperature around 32°C. That forces humidity low enough to allow the wind-chill effect to evaporate sprinkled water off birds before the next sprinkle cycle comes along. Birds need to dry off between cycles. Don’t let them get wet and stay wet because you’ll end up with wet floors. A house temperature less than 31°C is too cool if you are running sprinklers.

Timing the sprinkler cycle
How often chickens get sprinkled depends on age and the temperature outside. I usually don’t start sprinkling until birds are at least 4.5 weeks old because I want the house filled so that most of the sprinkled water goes on chickens, not the floor. Whenever the sprinkler runs, it’s for 20 seconds and I never change that.

I do change the interval between runs as chickens get bigger. When they are about 4.5 weeks old, I sprinkle once every 30 minutes. As they get bigger, I decrease that interval so that by six weeks of age, birds are sprinkled every 20 minutes. By seven weeks, it’s every 10 minutes. And by nine weeks, maybe every five minutes depending on outside conditions.

It’s important to watch birds and sprinkle again at about the time they get dry from the previous run. As they get bigger and the outside temperature gets hotter, the time for them to dry off between runs becomes less. You must watch what happens and adjust accordingly.

I have used a commercially available system at both the University of Arkansas and Mississippi State University with good success. In an era where water conservation is attracting global attention and locally where poultry growers may be paying high water bills or have weak wells or poor-quality water, sprinklers are a viable cooling alternative that are proven to maintain flock performance.

Tom Tabler, Ph.D., is an extension professor with the Mississippi State University Extension Service, Poultry Science Department. Find references for this article in the online version at canadianpoultrymag.com