This is the deck 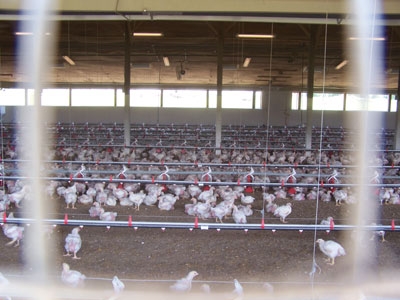 Tony Ambler of Yorkshire Valley Farms says it took a lot of legwork and learning to start a large-scale organic poultry company. Photo by Treena Hein

Small-scale organic poultry farming has been happening in Canada for some years now, but on a large scale, organic has been slow to get going.

Some of the reasons are obvious. It takes a large investment to go organic, and most poultry farmers don’t have an interest in that. It costs a lot of money to build new barns or retrofit existing barns to provide things like more room per bird (21 kg per m3) and access to the outside. (Because of this, organic poultry barns can’t be located on a migratory bird pathway where wild bird population numbers are higher at times of migration than elsewhere.) The barns must also feature the use of natural light and ventilation, which Yorkshire Valley Farms of Peterborough, Ont., accomplishes with screen panelling along the sides of the building. “When the inside barn temperature builds up, our natural ventilation systems kick in,” says Nick Ahrens, a Yorkshire producer. Production started only last November, so Nick and Yorkshire co-owner Tony Ambler are only now finding out how the extra room and natural ventilation will affect how their flocks fare during their first summer.

Large-scale organic poultry production has also been slow in coming because trying something new is a gamble that involves a lot of leg-work and learning. “We took enormous risk,” notes Ambler. “We had to find out about slaughtering, feed, transport, certification and more. We visited U.S. facilities on our own.” The eventual outcome was to have Yorkshire Valley Farms interconnected. The operation is one big cycle – one that’s economically, socially and environmentally sustainable, says Ambler. Yorkshire Valley co-owner Tom Ahrens, along with son Nick, grows components of the feed (soybean, wheat, corn and spelt), to which Jones Feed Mill (see sidebar) adds other organic ingredients at its Heidelberg facility to make feed. Ambler says it takes 2,000 acres of organic feed for their 60,000 quota units. Spelt straw from Tom’s fields is used as litter in the barns, and afterwards is composted and returned to the fields.

Yorkshire Valley lists another reason they think no one has come before them in the commercial organic poultry market. “Generally speaking, Ontario has not been as quick to embrace organic production as other jurisdictions,” says co-owner Ian Anderson. “OMAFRA programs have tended to focus on smaller organic operations. Going forward, we are hoping to see OMAFRA set out a vision for organic agriculture for Ontario and back it with targets and programs that engage large and small producers alike.”

OMAFRA Organic Crop Production Program lead Hugh Martin says OMAFRA has provided informational support for organic farmers large and small for 25 years, and organic companies of any size can access OMAFRA grants of up to $100,000 per approved project (up to 50 per cent of the project’s eligible cost) through the Ontario Marketing Investment Fund (part of the Foodland Ontario program). “Several larger companies such as Harmony Dairy, Organic Meadow, Sunshine Pickles and Mapleton Ice Cream have accessed this fund,” he says. “Organic companies can now also apply to use the Foodland Ontario Organic logo.”

With regard to other financial assistance for organic start-up companies of any size, Martin says there is a myriad of OMAFRA funding opportunities. However, very few of them are organic-specific, so organic farming businesses have to compete with those who use conventional agriculture. Yorkshire Valley did recently receive $105,000 from the Ontario government under Rural Economic Development, which will be used for added packaging equipment in order to double production.

Yorkshire Valley also believes Chicken Farmers of Ontario should look at organic poultry more strategically. “CFO always met with us, but only observed what we were doing to try to get the business moving,” says Ambler. “Up until Yorkshire Valley got rolling, people could go into their grocery store and buy organic eggs, milk, meat and other products, but couldn’t buy organic chicken. That is not good for the poultry industry in our view.”

When CFO was asked a number of questions related to degree of support for organic poultry production, CFO’s director of policy and industry relations, Chris Horbasz, responded, “As a regulator, it is CFO’s role to ensure that its policies and regulations facilitate the production and marketing of any and all types of chicken but it is not CFO’s role to promote or favour any type of chicken product or market over another. CFO is supportive of all types of regulated chicken farming as we are committed to serving the market and to meeting processor and consumer demand and we work with the industry – farmers, processors and others – to ensure that we can meet that demand. . . . We will continue to assess consumer and industry trends and work with our processors and government regulators to assess the information that is available and support farmers by responding to these market needs as they arise.” Horbasz wouldn’t clarify what he meant by support of farmers.

Looking ahead
In addition to its current retail lineup, Yorkshire Valley will be adding ground chicken and, potentially, marinated products in the near future. They are also adding organic turkey to the lineup for Thanksgiving, produced by Tim deWit in southern Ontario. “I’ve been growing antibiotic-free turkeys and I’m very comfortable growing turkeys without the use of antibiotics, but was waiting for an opportunity to sell birds on a larger scale,” he says. “There is a strong demand for it but the Ontario market is currently not being supplied.” DeWit says the organic regulations provided by the Turkey Farmers of Ontario specify a flock size limit of 30,000 kilograms (presumably to better contain a disease outbreak). Avian influenza testing on organic turkey flocks is also required one week before they are shipped, which is not required with organic chicken. DeWit gives a coccidiosis vaccine on Day 1.

Even with the challenges of taking the risks alone, and figuring out at each step how to proceed, the co-owners and suppliers of Yorkshire Valley are glad they’ve taken this journey. “We’ve learned – and continue to learn – how to best keep our birds healthy and happy under organic guidelines and that knowledge belongs to us,” says Nick. “Our feed conversion and barn mortality rates are similar to conventional operations, but our ‘condemns’ at the processing plant are lower.”

Although Yorkshire Valley will not comment on profit differences between conventional and organic production, volume is obviously important and the store price has to cover costs. Yorkshire Valley boneless breasts cost about 20 per cent at retail more than conventional counterparts. “The price is competitive for the product quality,” Nick notes. “There is less fat on our birds, the flesh is firmer, and of course, we think the taste is superior.”