The B.C. Chicken Growers launched a unique social media campaign to dispel myths about how chicken is grown 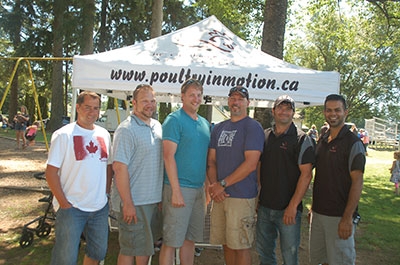 Actual chicken growers as action movie stars fighting the use of hormones and steroids in the production of B.C. and Canadian chicken? That’s the unlikely premise of the Chicken Squad, a recent social media campaign by the B.C. Chicken Growers Association (BCCGA) and the B.C. Chicken Marketing Board.

“We started working on the program three years ago,” says BCCGA president Ravi Bathe. “Our association directors talked a lot about how we talk to the public about things they are concerned about. Three years later, here we are.”

Bathe plays the primary “good guy” in the series of ten YouTube videos and an action movie “trailer” which can be viewed at www.chickensquad.ca. BCCMB director Kerry Froese acted as the main “villain” while other growers from both the Lower Mainland and the Okanagan took parts as supporting members of the cast. Even Chicken Farmers of Canada chair David Janzen appears in a cameo role as the good guys’ mentor. A total of about 15 growers and their families participated.

The short videos include “auditions” for the movie, grower interviews, outtakes and, of course, the movie trailer.

Even though the videos were shot in mid-winter and included a rather chilly scene where several end up in a backyard pool, the growers had a blast.

Relevention Marketing, the public relations and marketing firm contracted to co-ordinate the project shares their enthusiasm.

“The most rewarding part of the process was working with real chicken farmers and seeing the relationships and friendships which developed,” says Relevention marketing strategist Steffan Janzen. “To ask them to do something vulnerable and be able to laugh at themselves was great.”

Reaching Consumers
The program is based on consumer misconceptions about the use of hormones and steroids in chicken production.

“The most concerning statistic is how many consumers believe chicken contains hormones and steroids,” Janzen says, noting a recent survey showed 64 per cent of British Columbians believe that. The videos therefore clearly spell out that the use of hormones and steroids to produce chicken in Canada has been banned for 50 years.

Misconceptions are particularly prevalent among the young.

“We looked at the issue of trust between consumers and farmers. Do consumers trust the people who are growing their food?” Janzen asks, adding “there was a direct correlation between age and the level of trust. The younger the consumer, the less the trust.”

He says the campaign’s aim was to “increase the level of trust among younger urban consumers,” calling them “a highly skeptical group.”

They are also difficult to reach using traditional media, which is why a YouTube campaign was selected.

“Social media is becoming the norm now so we wanted to harness it,” Bathe says.

He would not reveal how much the campaign cost, but insists “the benefits outweighed the cost.” Although it was funded in part by provincial Buy Local funding Bathe notes the campaign was already being developed before the funding program was announced.

By the end of June, the videos had attracted a total of 175,000 views. The campaign also led to appearances on major Vancouver television and radio stations and interviews in many urban papers.

“It’s about making people aware that we have all these programs,” Bathe says.

“Part of the purpose is to build goodwill so when something happens there’s a level of comfort among consumers,” Janzen says, adding there is opportunity to do more with the material developed for the campaign.

That is something growers are considering.

“We are looking at the next steps,” Bathe says. “We hope to do more things like this in future.”