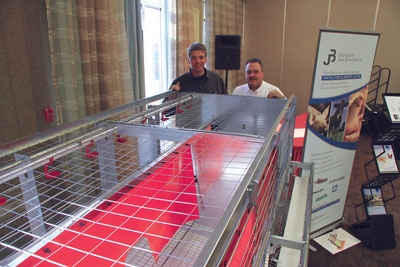 ‘’Everything has been rethought,’’ says Chris Bill, of Meller Poultry Equipment (based in Jarvis, Ont). ‘’There is more nesting space, more feed space and more perching space.’’

The new layer cage system boasts an innovative layout that allows more hens to feed, lay eggs and perch at the same time, without being bothered by other birds’ movement. It is readily enriched, as opposed to enrichable, the latter system requiring that accessories be added in order to become enriched.

The feed trough runs inside the cage, which allows birds to feeds from both sides, along the whole length of the cage.

This doubles the feeding area when compared to cages with feed troughs in the front, Bill points out.

Birds may access a lower perch in the front of the cage with little effort. They may also jump onto a middle perch, which is high enough for other birds to walk under without bothering those perching.

The third perch runs the whole length of the cage, on top of the feeding trough.

The nesting area has been shifted to the front of the cage. This reduces the travel distance for eggs rolling to
the belt.

With 20 inches cage height at the back, the Euro 2012 definitely offers more headroom, Bill says. ‘’The reason the cage is so high is all the perches. European standards say birds have to be able to perch and have a clear height for their heads and their wing span.’’

Bill says the Euro 2012 system is less expensive than its enrichable predecessor, even without accessories.

Even though Manitoba is so far the only province to have set a date for mandatory enriched cages in new constructions (2018), Meller believes the timing is right to introduce the Euro 2012 in Canada.

‘’We are forward-thinking,’’ Bill says. ‘’The writing is on the wall that this is coming. We want to promote the ideal cage now and give prospective buyers an idea of what is coming.’’

Bill anticipates Canadian regulators will turn to EU standards when making enriched cages mandatory, which makes the Euro 2012 system a safe bet. Farmers switching to enriched systems may simply use them with the current maximum density of one bird per 67 square inches and adapt when new regulation dictates lower density.