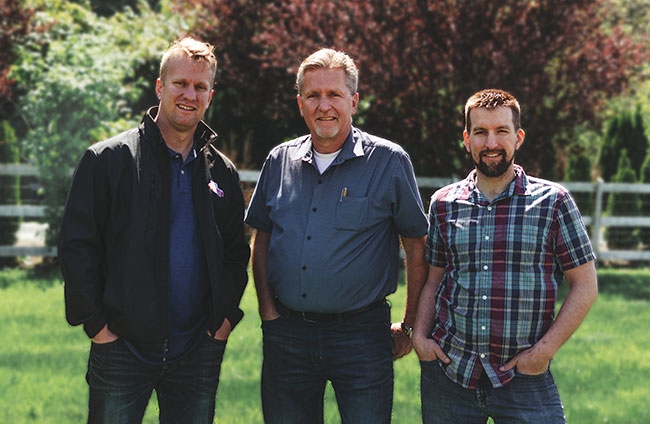 If there were an award for operational diversity, Fraser Valley Specialty Poultry (FVSP) near Chilliwack, B.C., would be a top contender – if not the winner.

The business’ product line is diverse, not only in terms of species. It markets products under three production systems and also offers value-added, ready-to-eat products like smoked duck breast along with primary-processed fresh and frozen items. The operation also uses several innovative sales and distribution avenues.

This diversity is not only allowing the family farm business to thrive but also how the farm fought back after a devastating period several years ago.

It all started in 1973. At that time, the property was owned by a man named Peter Zilian, a boiler maker who had immigrated to Canada from Germany. There, at the base of Vedder Mountain just east of Yarrow, Zillion raised Pekin duck as a hobby, processed in his bathtub and regularly delivered fresh whole duck to Chinatown in Vancouver, about an hour away.

“He had a line-up all the time and so he expanded production and eventually was able to get the permissions and built a processing plant by the early ’80s,” Fraser Valley general manager Joe Falk explains. Zilian also added Embden geese.

“He weathered the recession in the early ’80s with its high interest rates and so on, and continued to build the business. Our family purchased the farm in 1998. Peter still comes in and visits with Dad from time to time.”

Disaster breeds diversity
Through to 2004, the Falks produced duck and geese, and added chicken. However, at that point, avian influenza hit the Fraser Valley. “We lost all our breeding stock and had to lay off all of our staff,” Falk says. “When we got production back up, we were dismayed to see that competitors from B.C. and the U.S. had quickly filled our market. We realized we had to diversify, so we started Taiwanese chicken production.”

But Fraser Valley wasn’t about to give up on gaining back its market share for duck, even though Falk notes it was a “very tough” road. “Our existing distributors wanted to keep a roster of products, including ours,” he explains. “While no one can blame them, we knew we’d never be able to get back to what we had lost just keeping things that way.

“So, we kept our distributors, but we also bought a warehouse in Richmond and created our own distribution system. We hired our own salespeople to approach retailers and bought trucks so we could do our own delivery.” Fraser Valley went from 25 customers pre-outbreak to 500 customers now.

“Having our own distribution centre allowed us to keep moving the volume and set our own price,” Falk notes. “It was a local fresh product, which is very attractive to restaurants in particular. They had adjusted to using frozen product but we made it easy to switch to fresh. We deliver right to them what they want.”

Impressive growth
At the same time, Fraser Valley applied for an increased allocation for chicken production. After being turned down under the Assurance of Supply regulations of the time, Fraser Valley launched an appeal to the Farm Industry Review Board. The outcome was positive.

The Falks also grew chicken production during these years by purchasing quota from a few nearby producers. They boosted goose production to 25,000 as well (once a year in the spring, as geese have one breeding cycle per year). What’s more, they added squab around 2005.

It was about six years ago that Fraser Valley started producing raised without antibiotics (RWA) Pekin Duck. “We just didn’t need antibiotics the way we were farming, but we only started marketing our products that way a couple of years ago as our customers were asking about it,” Falk explains. “We also have a turkey producer-partner who produces RWA turkey for Christmas.”

Fraser Valley has also grown its supplier base. At this point, 20 family farms supply the Falk’s processing plant with everything from normal broiler, Taiwanese chicken and squab to organic broilers and RWA broilers.

They began marketing organic products around 2012 when the owners of one of its Taiwanese chicken supplier farms, Windberry Farms in Abbotsford, wanted to expand into organic chicken.

“We wanted to go into the organic market anyway, so it worked well,” Falk says. “We have very good relationships with all our partner farms. Of course, it was a lot of work because audits are needed not only for producers but for us as a processor, and we also had to break into a new market, but we did it.”

The relationship between Windberry Farms and Fraser Valley began in the early 2000s. Brad Driediger, partner at Windberry, says they made the decision to go organic together in 2011. “We have a great relationship,” he says. “We have similar cultural heritage. We share similar values, business values and family values. Honesty and integrity are important to both our families.”

However, Fraser Valley’s main focus is still Taiwanese chicken and duck, and Falk says the market for the former continues to grow. “We started exports to states like Washington, Oregon and California about four years ago and we sell across Canada too,” Falk says. “There is a lot of room left to grow in Canada, the U.S. and also overseas.”

As Fraser Valley’s processing plant is provincially licensed, it uses a federally licenced plant in Abbotsford for processing its federal products that are sold across Canada and exported.

New directions
In 2008, Fraser Valley further diversified in a different manner, taking the plunge into ready-to-eat products. Working with Johnston’s Packers in Chilliwack, they quickly developed a duck sausage, smoked duck breast and pepperoni, which Johnston’s makes to this day. Falk says it’s all hugely popular.

With 2014 came yet another type of diversification. The farm had been doing some on-farm sales, conducted by office staff, but the large number of customers was difficult to manage. The Falks therefore decided to open an on-farm store, which Falk says was a success from the very start.

The store not only offers Fraser Valley products, but all sorts of other local products such as ice cream, cheese, pirogues, beef, bison and honey. “The store is a destination for people who live in Langley or Vancouver, even though it’s small,” Falk says. “We have a selection that they can’t access anywhere else, and we’re always looking for new local products to include.”

Besides breaking into new markets, Falk lists another major challenge over the years to be hiring and retaining processing plant staff. “It’s very tough and every year it gets harder, no matter what we do,” he says. “We are regularly short-staffed and at those times, we can’t cut up pieces and have to just do whole bird. We would very much like the government to improve and expand the Temporary Foreign Worker Program.”

Other challenges have included replacing infrastructure and, as is the case with any growing business, dealing with cash flow pressures. Falk says they’ve excellent support with that through a long-term relationship with BMO bank.

“In the future, we’ll be doing what we already do but doing it better,” Falk says. “Every year, we’re growing the business about five per cent. We’re going to increase our volume of packaged pieces for retail, and we’re building another barn for Taiwanese chicken this spring.”