A look at emerging traits, techniques and technologies that will have a lasting impact 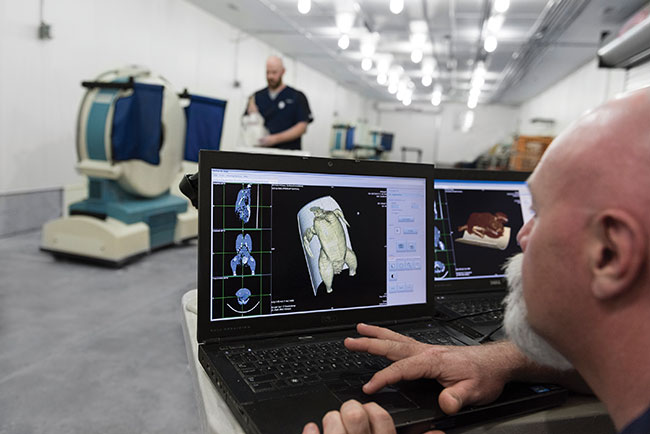 In the November issue of Canadian Poultry, we highlighted some of the latest chicken and turkey breeds. In this the second part of our two-part series, we focus on what’s to come. What traits will be increasingly important and why? How will gene editing change poultry breeding? What other new technologies are coming into use, and what difference will they make?

Broilers
Companies have been adding more traits to broiler breeding programs for some time. Experts expect that to continue, according to industry insiders like Trevor Gies, senior marketing manager for North America at Cobb-Vantress. “One trait that we have been selecting for many years is meat quality, which has become a hot topic,” he notes. Meat quality can include many parameters, including appearance, texture, flavour, safety, nutrient content and availability, ease of preparation, quality retention and more.

Anne-Marie Neeteson, Aviagen’s vice president, welfare and compliance, and Santiago Avendano, the company’s genetics director, also believe companies will continue to add more broiler traits. “Breeding goals have expanded vastly in the last three decades, combining productivity and biological efficiency with liveability, robustness, adaptability, reproduction and welfare, and this process is not expected to stop but to continue even further,” they explain in a paper called “Breeding the Chicken of the Future”, which they wrote for the 11th Asian Pacific Poultry Conference in 2018. “An increased ability to change and adapt as a response to current and future changes in global trends will be needed, which in plain words just means more balanced progress across more traits,” they wrote.

Companies will be required to continuously invest in R&D, they say, to understand the genetic basis of novel traits and correlations in genes, as well as trade-offs between new and existing traits with regard to breeding goals.

Neeteson and Avendano also note that consumer values are shifting, and that breeding must address this reality. They point out that other researchers have identified evolving drivers in consumer purchase decisions, which include health and wellness, safety, social impact and more. The increased importance of these drivers “makes transparency through the whole product supply chain a requirement, as…consumers want to know more about their food, where it comes from and how it is produced,” they state. “Breeders contribute to the required transparency throughout the industry by informing the wider society of the improvements being made through selective balanced breeding and subscribing ISO certifications and to codes of good practice.”

Paul van Boekholt, manager of global marketing at Hubbard, agrees that for both conventional and premium markets worldwide, producers can expect further improvements in broilers. Specifically, he foresees better feed efficiency, robustness, meat yield and quality, productivity of the females, fertility of the males and growth rate, as well as the ability of broilers to adapt to diverse conditions.

As to how much demand there will be for traits associated with heavier broiler weights, Aviagen marketing communications manager Wendy Parker notes that will depend on how the markets evolve. “But any increase in weights will have to be balanced by improvements in the metabolic and skeletal support and robustness of the bird,” she explains.

Van Boekholt points out that the use of new technologies will continue to contribute to further improved accuracy of broiler breeding measurements and predictions. “An example of the latest technologies is advanced 3D imaging to improve selection for skeletal health, meat yield and quality,” he explains. “Also, Lifetime Feed Conversion Ratio (LFCR) technology is being implemented, a modern method to observe FCR and feeding behaviour.”

Breeders will use genomics (the study of DNA and its function, typically combined in breeding with livestock performance and pedigree information) to increase their accuracy of selection in all traits. That said, Neeteson and Avendano note that it is especially important in traits in which there is limited information at the time of selection.

“There is no doubt that genomics information will contribute significantly to genetic potential,” they state, “which will be expressed in the wide range of production environments worldwide.”

Breeding companies are adapting technologies from the human medical field like CT scanners to improve the health, longevity and wellbeing of birds.

Turkeys
Turkey breeding, in the view of Sandi Hofmann, marketing and administration director at Aviagen Turkeys, will also benefit from genomics and other advancements in the effort to produce healthy and robust birds. Echoing Neeteson and Avendano, she notes that selection of more difficult traits with increasing accuracy will become a reality.

“The future of genomics will include identifying single nucleotide pairs associated with immune function,” Hofmann explains, “that may contribute to robustness and even disease resistance.”

These types of traits have lower heritability, she says, because there are low incidences of health challenges within turkey pedigree populations.

New technologies also allow breeding that’s less stressful for birds, Hofmann notes, such as platform scales and FCR stations that allow the birds the full use of their pen and to be kept within a flock. “A variety of different equipment is used,” Hofmann says, “and we often look to human medicine for equipment to use on our turkeys, such as lixiscopes, ultrasounds and oximeters.”

Layers
Hendrix Genetics product manager Teun van de Braak says the company’s breeders are using vision and robotics to measure egg quality in a way that’s extremely detailed and also fully automated – and, therefore, completely objective. “In the past, we did egg scoring/grading with human beings, but it is challenging to get exactly the same way of looking at eggs and egg quality when you work with so many people in so many breeding centres,” he explains.

Regarding gene editing, van de Braak says Hendrix is following its development. However, he notes that the company is in Europe, and on that continent gene editing is still considered to be GMO. “We do not expect to use it in the coming years,” he notes. “Maybe in the long term it can be implemented. Mostly, disease resistance and in-ovo sexing is of interest for this technology. For other traits, not too much, as current technologies are working very well and are trusted by the public. Transparency in what you do is very, very important.”

Similarly, Hy-Line International global marketing manager Brittney Roorda notes that while gene editing is “an interesting technology,” it will “have difficulty gaining traction as the primary breeders avoid GMO technology in breeding layers due to a lack of acceptance around the world.” Hy-Line already fully incorporates molecular genetics technology in all of its layer breeding lines, and Roorda says her firm will continue to make genetic progress in the future by identifying the genes that guide beneficial traits.

Breeding for the future: a quick summary