The Future, One Class at a Time 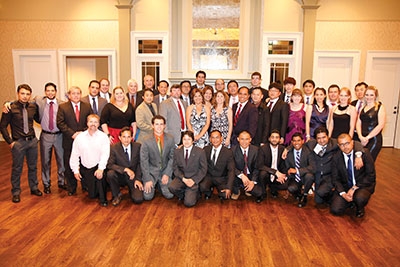 The Arbor Acres Production Management School opened its doors in 1967. Since then, more than 1,500 poultry professionals from 62 countries have graduated, and this year Aviagen is celebrating the graduation of its 50th class worldwide.

The school is just as relevant today as it was then, teaching the fundamentals of poultry husbandry and production to Aviagen employees and customers, and allowing them to immerse themselves in every facet of poultry production.

In the early days, students would live at the school for up to three months where they learned how their roles and companies fit into a larger global industry. And, perhaps most importantly, they took their newly acquired knowledge home with them to share with their colleagues.

“Much of the modern poultry industry came about because of their school,” says Neal Scanlon, who ran the school after it was relocated to Huntsville, Ala., following Arbor Acres’ merger with Aviagen.

“It really helped create generations of industry leaders. These were people who were expected to move up in their companies, and they’re hand picked to attend. And when they return home and share those best practices with others, it elevates their entire company, even the poultry industry in their entire region.”

The 2013 curriculum will feature 19 field trips and workshops focusing on fertility, ventilation, gut health, feed formulation and more. “We get people right into the facilities so they understand how everything works,” says Scanlon.

“You can show your students what a good male looks like, or can have your best technical guy on one table doing a necropsy on a bird and another showing the proper way to vaccinate a bird. It’s complete immersion.”

And students learn from the best with 30 different instructors and experts sharing lessons that at times can be eye opening. “The way most people learn the industry is by picking up how things are done at your company, but those aren’t always the best or latest approaches,” says Scanlon, who directed the school from 2004 to 2012.

Insights from industry experts and faculty from local and international universities – both staples of the program since its inception – frequently prompt students to question long-held assumptions.

International demand has grown so much in the past decade that Aviagen has expanded the school to other regions: an annual, weeklong school launched in 2007 in China, a trilingual school for Latin America launched in 2011 and three weeklong annual schools have been serving students in Europe, the Middle East and Africa since last year.

Aviagen plans to continue innovating, says the current school director, Mark Wright. “We’ll also be expanding our regional schools, with more schools based on the modular, one-week format of the European school. This is all about helping to support future generations of poultry professionals.

“Over the years we have evolved the school agenda and design to encourage students to not only learn from the eminent lineup of presenters from academia and industry, but also from each other,” he adds. “This environment fosters business relationships and friendships that last throughout a career as well as a lifetime.”

The school offers a unique environment for networking as well.

“Students create bonds at the school that last their entire careers, and they make connections that help them not just at their current company, but for years into the future,” comments Wright. “They learn from each other; they learn how people work in different parts of the world. They understand the entire industry so much better when they leave.”

Aviagen has also launched a secure online forum, which allows school participants and graduates to be part of a growing social community that further establishes bonds between students.

On June 27, the top performing students were recognized at a graduation dinner:

As Wright says, “In every class since the beginning, you get to see the rising stars of the industry on their way up. Where else can you do that?” n