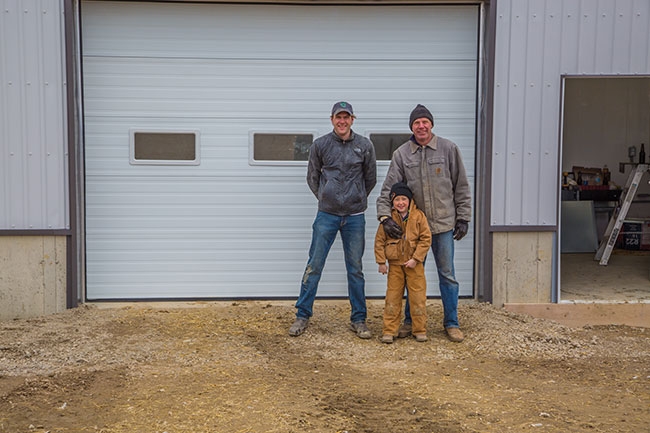 Jack Greydanus (right) with his son Peter and grandson Jacob.

Dairy to poultry, peppers to cannabis, sales to farm management and law school – and back to sales. This is only part of the diverse career path of Jack and Christine Greydanus of Greyda Plains Poultry near Sarnia, Ont.

The couple’s start in poultry farming came after both of them had worked in private industry for quite some time. “I grew up on a dairy farm, but didn’t want to pursue that,” Jack explains. “So, I went to Kemptville College and then worked for United Cooperatives in Sault St. Marie, Durham and Listowel for about 11 years.”

Christine grew up on a beef farm and, after school, worked in nursing homes in Durham and Mount Forrest, managing support services. “Christine and I had talked about making a change and getting into farming,” Jack notes. “We wanted our children to be raised on a farm because it’s a good lifestyle and teaches them responsibility.” They found a broiler breeder farm for sale in Petrolia in 1990 that had two barns with a capacity of 9,000 birds each. They decided to take the plunge.

“We knew pretty much nothing,” Jack remembers. “The staff at our hatchery, at the time it was called Neuhauser in Stratford, helped us learn a lot, and since then the hatchery has been sold to Maple Leaf and they’ve been excellent as well. Our feed companies were also helpful.”

However, the first year was not without serious challenges. During that first summer, a very hot one, the Greydanuses lost about 4,000 birds due to excessive heat. After looking at their options, they decided on evaporative cooling (cooling cells), used in conjunction with tunnel ventilation.

“That cooling system was the best decision we’ve ever made,” Jack says. “It works really well and it’s pretty common in the poultry industry now, but we were the first to install one of these systems on an Ontario poultry farm.”

At the time they purchased the farm, the barns had only a hand-gathering system for eggs, so within three years, Jack and Christine put in a community nesting conveyor system from Jensen. They also focused on expansion, building a pullet barn and purchasing the quota for it separately from any land purchase, which was a new concept at the time (1995).

In 1999 and 2001, they bought nearby farms and over the next couple of years built another three breeder barns and a growing barn. In 2002, their son Peter bought into the farm and has continued the growth (on the home farm, he built a new barn in 2016 to replace one of the original barns and intends to build another barn this year).

“Chicken demand is growing,” Jack notes. “We started originally with 13,000 units of quota and now it’s 50,000 and we are under contract for all of it with Maple Leaf. They are excellent. An ideal partner to work with.”

The couple had funded the original farm purchase through family support and the sale of their house in Listowel. Later on, they secured credit for expansion with the bank. “The Dutch community is not afraid of borrowing money and taking risk,” Jack notes. “My motto is that the biggest risk is not taking one. And I think you make your own good luck.”

Diversification begins
By the early 2000s, Jack and Christine were looking for further opportunities to grow their farming business. Around 2004, a news story got Jack’s attention. McDonald’s was being sued by a customer for causing obesity. Jack had a strong feeling that because of this sort of negative view of traditional fast foods, the chains would be adding salads to their menus.

He and Christine looked into adding a greenhouse to the farm, and by 2005, they founded Enniskillen Pepper Co., where Christine (as she had with the poultry) served as chief financial officer. It was a large initial investment – six acres of red pepper production. By 2012, they had added another seven acres to more than double their production of red, orange and yellow peppers. Most of their harvest went across the U.S. border.

In terms of the biggest challenge of running both the greenhouse and poultry businesses, Jack points to finding good employees. He says that once that’s accomplished, it’s a matter of everyone understanding their responsibilities and being trusted to do their work.

Along the way, Christine got an MBA in Food and Agribusiness from the University of Guelph (2012) and then went on to obtain her law degree at Osgoode Hall (2015). She worked as a lawyer for a law firm and also served as a councillor at the Township of Enniskillen from 2003 to 2010 and 2012 to 2014.

Chairing CHEP
In 2011, Jack became chair of the Canadian Hatching Egg Producers (CHEP). He thinks his biggest accomplishment in that role was being able to achieve an increase in the production of hatching eggs across the country so that there’s adequate supply for the broiler industry.

“Production of broiler breeders was always behind, and it’s been very satisfying to grow the hatching egg industry,” he says. “I think the other main challenge has been for everyone to recognize the reality of reduced antimicrobial use. Our responsibility, more than ever, is to produce a clean and robust eggs and stronger chicks and we’ve put policies in place to achieve that.”

He notes that there seems to be a lot of interest in expanding the use of HatchTech hatchery system, and sees more investment in that concept coming.

For his part, CHEP executive director Drew Black says that over the past year, he’s seen first-hand the way Jack has had a positive impact on the industry and says he’s personally learned a lot from him.

While Black has only worked with Jack for a small portion of his career, “It’s been apparent that he has always been the type of guy to roll up his sleeves and dive in to tackle a difficult issue. His commitment to the broiler hatching egg industry has been proven time and again when he’s stepped up to take a leadership role to help navigate the industry through challenging issues.”

Jack Greydanus (right) with his son Peter and grandson Jacob.

Peppers to pot
In late 2016, with medical cannabis being legalized, Christine and Jack were approached by a firm called Tilray for help in finding a site in the area for a cannabis greenhouse operation. As the Greydanuses had been running a greenhouse business in the region for some time, they were a really good potential source of information. However, no site of the desired size, with adequate water, natural gas access and so on, was available.

Shortly after, Tilray leadership asked if Jack and Christine would be interested in selling. “We declined, but then they asked if we would consider leasing,” Jack says. “We put a value on that which was above our projected profit margin and they accepted. That made the decision pretty easy.” Tilray has leased the entire 13 acres and the acreage it’s on, since October 2017. Some of the staff have remained, Jack notes, including the primary manager.

New opportunities
Not long ago, Jack decided to step down from his role as CHEP chair. Black notes that, “While Jack is stepping back from political involvement in broiler hatching egg industry, I know we haven’t heard the last of him and I’m wishing the best for him in his other endeavours.”

Indeed, with the greenhouse pepper business also being over, and their son Peter running the broiler breeder operation, Jack and Christine (especially Jack, as being CHEP chair took up a lot of time and involved a lot of travel) have more time.

Christine recently received a provincial appointment to Ontario’s Agriculture Food and Rural Affairs Appeal Tribunal and in May 2019, Jack started in the role of poultry feed consultant at Hensall District Co-op. He’s also involved with planning and managing investment in their daughter Jenna’s impending construction of a 30-room hotel in Petrolia.

Reflecting on their history, Jack says that diversifying has meant new and exciting challenges. “Additionally, it has meant introducing new business options and ideas to our family,” he observes. “We think that we have shown our children how to start up new ventures, and demonstrated that with determination and careful financial management you can dream it, plan it, take the risk and have every reason to believe you will succeed.”