The Internet of Things

A look at recent advancements in IoT solutions for poultry farmers. 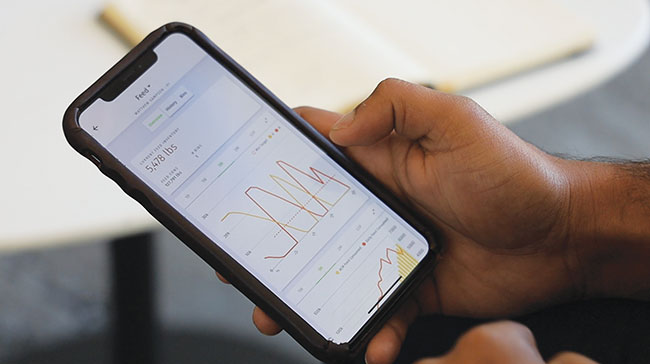 In agriculture, the use of IoT technology is often referred to as smart farming.

The Internet of Things (IoT) is often touted as the next big thing in agriculture. But what exactly is it, and how can it help farmers?

First-generation producers Dan and Lisa Jones run a fairly new 50,000-unit broiler operation north of Fergus, Ont. While they come from farming backgrounds, both work off-farm. Dan is an expert in biogas production and works for 2G Energy Inc. Lisa works as a nurse. They put their first birds in the barn in 2018 with the aim to provide opportunity for their two teenaged sons in the years ahead.

While the boys help on the farm, they’re teenagers and are still learning the ropes. And Dan and Lisa’s full-time jobs make managing the farm efficiently challenging at times.

Finding a way to get a consistently high-quality product is vital to their success, so they decided to employ the Maximus solution, which brings together IoT technology that monitors ventilation, heating, humidity, air quality and lighting. Dan says this has allowed them to better understand what they need to change to get a repeatable, reliable product.

A controlled environment is critical to the success of the end product, Jones says. The less you have human emotion interfacing with controls the more repeatable the environment. That’s where IoT solutions come in.

The “Internet of Things” is best described as a system of interconnected computing devices – everything from mechanical and digital machines to sensors and applications – that transfer data without human intervention. The collected data is sent to a central location, typically the cloud, through a wireless network. In agriculture, the use of IoT technology is often referred to as smart farming.

The first IoT device came in the form of a Coca-Cola vending machine that was rigged to report inventory and drink temperature via the Internet. It has since evolved to include a whole slew of technology, including applications that collect data related to temperature, humidity, air quality, soil parameters and even disease outbreaks.

New sensors
More and more, companies are introducing new sensor technology with real-time connectivity to the poultry sector. Brazil’s S4A IT Solutions, for instance, recently set up shop in Calgary, Alta., where they are actively looking for new customers who are interested in partnering with the company. The company offers full end-to-end IoT solutions that consist of physical sensors and big data cloud platform options, coupled with analytical tools to help drive insights that support decision-making.

“What we’re trying to capture with this IoT technology is having environmental inputs and then being able to draw correlations and trends via analytics to become a very data-driven decision making poultry operation,” explains Ken Choi, VP – business development, S4A IT Solutions. “We understand feed conversion is a critical performance indicator – our IoT technology enables this key performance indicator”

IoT solutions offer advantages for young and new poultry farmers as well, Choi says. “In the old days, success was based on experience. But now with IoT technology, your success and decision making can be enhanced, driven by data,” he says.

Disease monitoring
IoT sensors are available for the rapid detection of disease as well, says Jake Astill from the Poultry Health Research Network at the University of Guelph. Using audio, imaging and other sensors in combination allows producers to continuously survey flocks for symptoms of disease.

“The technologies all function by detecting altered phenotypes as a result of infectious disease, whether it be the production of rales in the case of respiratory illness, decreased activity resulting in altered movement patterns or changes in body temperature,” Astill explains.

While the devices that capture data are integral to the ability to detect disease quickly, it is the advent of IoT that has greatly enhanced the ability for these devices to work efficiently. IoT allows for real-time data transfers, enabling farmers to swiftly detect and respond to potential outbreaks, which could lead to lowered antibiotic use in future, too.

“Potentially, this could include changes in barn environment or ventilation, or some other process that inhibits the ability for infectious agents to leave a poultry house where infected birds are present,” Astill says. 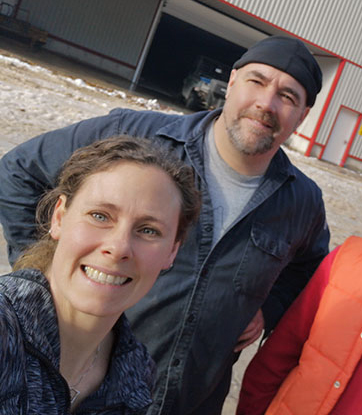 With full time jobs away from their farm, Dan and Lisa Jones use IoT solutions to help monitor and manage their birds.

“Our solution is basically intended to be the hub that connects all the parts of the supply chain from the farming side into hatcheries in the broiler and turkey market, feed mills in terms of managing nutrition, all the way into processing plants, be it egg processing or meat processing,” says Chris Blosfeld, global sales and marketing director at MTech Systems.

It is designed to capture costs, trends and key performance indicators throughout the supply chain in order to help optimize the operation from start to finish rather than putting focus on one ‘island’ at a time, Blosfeld explains.

Ultimately, the idea is to increase yield while using fewer raw materials and establishing more sustainable production practices, he says. In order to do so, we have to look at the whole supply chain and not just one individual component, Blosfeld adds.

Low-frequency applications include meter readers, temperature monitors and tracking devices for things like the opening and closing of gates. Higher bandwidth applications are used for real-time GPS tracking or transferring video, for example.

Around the world, free radio frequency – called ISM band – is set aside for low-data transmission, explains Kent Rawlings, CEO and president of Sigfox Canada. “Because there is no cost to access the spectrum, there’s a limit to the amount of data you can process over that channel,” he says. “We’re able to communicate 12 bytes of information.”

Sigfox doesn’t manufacture sensors; the company provides a communications standard device that enables manufacturers’ devices to communicate through the Sigfox network. At the moment, some 800 devices use the Sigfox chip to transfer data. In agriculture, these include everything from devices that measure temperature, air quality and gate access to feed levels in silos and soil moisture levels.

Currently, each chip costs $4.00 per device, but Rawlings says the company aims to drop that price down to $1.00 per chip. This is really important, as the costs to measure and communicate information are really high at the moment. As the price drops, though, Rawlings says IoT will be much more attractive to producers.

Digital empowerment
In the meantime, Dr. Tyler Whale, president of Ontario Agri-Food Technologies (OAFT), and Dr. Karen Hand, founder and president of Precision Strategic Solutions, have been advancing an idea to enable farmers to control and leverage the digital information that they gather.

AgBox is a cooperative, farmer-owned data repository for the mountains of information generated on farms, including that from IoT devices. Essentially, the farm-based cloud would be provided to poultry stakeholders, for example, who need or require a secure data collection, storage and enablement service.

The idea, Whale says, is to ensure that data is controlled by and generates an increasing return for those who are creating it. Hand and Whale are co-leads on the project supported by OAFT, a non-profit organization that focuses on the commercialization of new agri-tech innovation.

The platform is ideal for farmers using multiple tools that don’t necessarily sync well. “Or, for example, lacking trust in public institutions who are susceptible to freedom of information rules, so farmers are unlikely to put their business data on an academic institutions or a government platform in its entirety,” Whale says. “They want to be able to control their private business data, but at the same time realize the value from it in the collective or the aggregate of that data.”

While the platform is not yet ready – it requires funding and needs to be further developed – the vision is being developed.

A connected future
It is likely that IoT devices will become more commonplace on farms in the very near future, especially as farm size and pressure to produce more food more efficiently increases.

IoT solution will enable farmers to make better decisions in terms of feed conversion and disease control, as well as monitor key performance indicators that improve production. The future is connected.