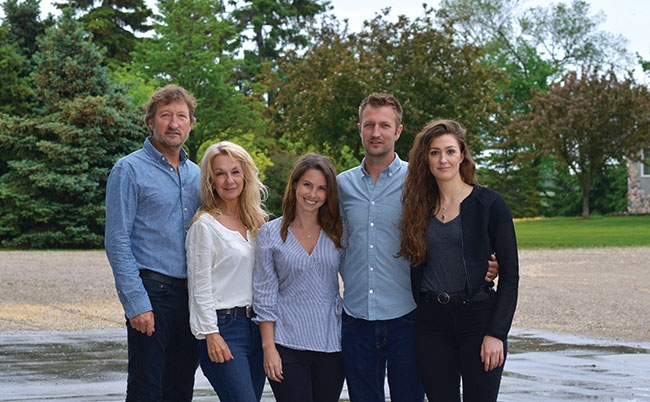 Faith, family and farming have always been fundamental cornerstones in the lives of Manitoba poultry producers Don and Agnes Neufeld.

That’s why the Mennonite couple were happy to embrace a plan hatched by their son Jordin in 2016 to unite their farms and diversify their operations through the acquisition of additional acreage and a nearby breeder farm.

“It was all initiated by Jordin’s love for the farm and the very limited access to land here,” Don recalls from his family’s farm in Niverville, Man., which is 30 km south of Winnipeg in the heart of the Red River Valley.

Don’s father John started raising broiler chickens there in the pre-quota 1950s. Today, there are two broiler barns on the property with acquired quotas of 98,000 kg per cycle with 7.4 cycles per year – a total of 800,000 kg per year.

Though Jordin has worked there his entire life, the 33-year-old also struck out on his own after studying agriculture at the University of Manitoba (U of M), first as a territory manager with a local company selling feed to chicken and turkey farms, then as a grain farmer growing corn, soybean, canola, wheat and oats on 1,400 acres of land he owned or rented.

Joining  forces
It was the sudden availability of 2,000 acres of farmland near Niverville as well as a breeder farm in the village of St. Malo, a half-hour’s drive further south, that convinced Jordin and his parents to join forces.

“We could acquire some acres west of the Red River, so that’s what we did,” Don says. “We moved over half of our production to the west side of the river, which at that time was less expensive.”

According to Jordin, the move helped to both grow and diversify his family’s grain production for the local market, most of which is used to make animal feed and grain-based fuels.

“Being spread out geographically means that our risk per acre has gone down quite a bit in the event of hail or lack of rain or floods or all those things,” Jordin says. “We’ve also diversified in crops, which helps with weed control (and) allows us to reach different markets.”

The breeder challenge
The purchase of the breeder farm in St. Malo, however, was the biggest diversification game changer for the Neufelds’ poultry business.

One of only 23 breeder farms in Manitoba, the property has three barns with a property-tied annual quota of 10,000 hens and 150 eggs per bird.

“Me and my dad had been looking at breeder farms for a decade before we bought this one,” Jordin says. “We’ve always been interested in the challenge of raising breeders that are the parent stock of our broiler birds.

“But it’s not like you can pull out the real estate ads and find (a breeder farm) that’s two miles away,” he added. “This was close enough to be viable and there weren’t a lot of options. It was an opportunity and we acted on it.”

Trouble was, the deal went through just seven days before Jordin married Chelsey, a community development expert who works for Agriculture in the Classroom Manitoba, a non-profit group that promotes awareness and careers in farming to students from kindergarten through high school.

From left to right: Don and Agnes Neufeld with daughter-in-law Chelsey, son Jordin and daughter Jelena.

Learning the ropes
Adding to the challenge was that neither Jordin nor his dad had every run a parent stock-producing property. “It was pretty much a whirlwind introduction to the world of breeder farming,” quips Jordin, who lives on the St. Malo farm with Chelsey, a local girl he met through his sister Jelena, who works part time at both Neufeld farms and with Manitoba’s Touch the Farm program, which promotes the chicken industry at provincial fairs.

According to Jordin, the breeder farm’s hens make the 18-hour drive from Arkansas the day they hatch. Once they reach 23 weeks they are stimulated with light and feed to induce them to produce offspring from the clutch of yolks inside them.

Egg gatherers then sort the eggs, removing any and all that don’t look viable. Non-viable culled eggs are refrigerated and consumed by family and friends.

Roughly 92 per cent of all laid eggs get sent to a hatchery, though only about 89 per cent of those eggs actually hatch. “You can’t tell if an egg is going to hatch from just looking at it,” Jordin says. “Something can and does always go wrong.”

Day-old chicks that emerge from the farm’s eggs at the hatchery, he adds, are earmarked first and foremost to fill the Neufeld’s barns in Niverville, where they are raised to 33 days in one barn and 28 days in the other.

The rest are used to fill the broiler barns of other Manitoba poultry producers.

For Jordin, the family’s diversification into breeders means they now own parent stock as well as rear their chicks up to meat-size birds. “I guess we’re vertically integrated,” he says. “The only part we don’t do is the hatching of the birds. I thought about (doing it) a few times.  The biggest problem is the number of hours in a day. You can’t do everything.”

Counting their blessings
For his part, Don says that he and his wife Agnes, an award-winning photographer who went back to school in her 40s and spent a decade doing a fine art’s degree part time at U of M while working full time on the farm, continue to count their blessings and to savour the fruits of their family’s labours.

“We enjoy the farm,” says Don, who recently completed a second two-year term as a board member of the Manitoba Chicken Producers Board and an alternate to the Chicken Farmers of Canada – political mandates that he says he enjoyed but that will be his last. “Now I get to stay home.”