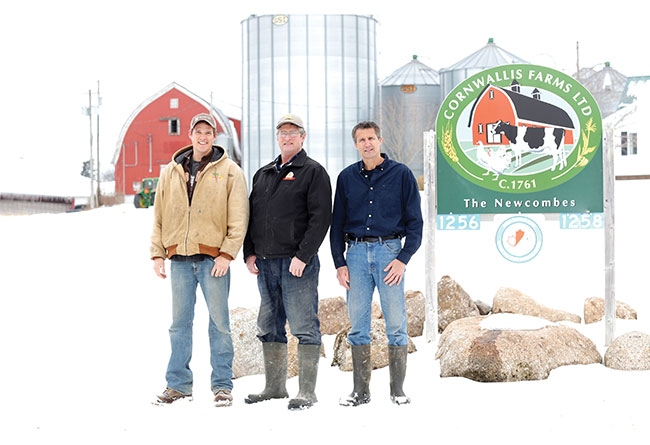 In the year 1761 a man named Deacon John Newcombe received a land grant in Nova Scotia. He packed up his family and was among the New England Planters that settled in the Annapolis Valley to farm the land that was vacant following the Acadian Expulsion.

Today, Cornwallis Farms can trace from that historical land grant through 250 years of history, including Confederation and two world wars, to be one of Canada’s oldest farms – in fact, older than Canada itself. The ninth and 10th generation of the Newcombe family now carry the tradition and work that same land.

Mixed history
Cornwallis Farms has always had a history of mixed farming, says Geneve Newcombe, who together with husband Craig marks the ninth generation. Geneve says the mix of farming sectors has changed through the centuries, including moving away from pigs and apple trees.

“Whether Craig’s grandfather was a wise man or lucky man, he concentrated on the dairy and poultry,” Geneve says, noting a couple decades later supply management was established.

“Now our farm is the only one in the province with these three particular supply-managed commodities together,” she notes. Cornwallis Farms comprises 23,750 classic egg white layers, 1.6 million kg of broilers, and 70 kg of dairy quota, in addition to cropping 2,000 acres.

A family affair
Geneve and Craig are partnered in the family farm with Craig’s brother, Brian, and his wife Edna. David, middle son of Geneve and Craig, has recently joined the team full time post-university and is keen to be the 10th generation at Cornwallis Farms.

Older brother Robert is an engineer and a great resource for projects, and younger daughter Kathleen is taking her master’s in occupational therapy and enjoys helping around the farm, too, Geneve says. Brian and Edna’s oldest son Evan is very interested in the mechanics and cropping aspects, and son Ryan also helps.

“The beauty of being larger and diversified is that there is room for all,” Geneve says. Craig manages the feed mill and broilers, Brian the dairy and crops, David oversees the layer flock, Edna is involved with succession planning, and Geneve is responsible for all the administration, including regulatory paperwork.

Secrets to success
Patti Wyllie, general manager of Egg Farmers of Nova Scotia, has worked, in her career, with three generations in the Newcombe family and alongside Geneve as a board member (including more than five years as board chair). Patti says, “The fact the family farm is continuing into the 10th generation says a lot for who they are as a family in business.”

Geneve suggests the secret to the Newcombe family success is that they all get along and respect each other. “We don’t like conflict; we like to get on the same page,” she says. “Maybe because we’ve been doing it for so long, we’ve learned for us it’s better if we don’t rush into things, we talk with each other, everyone’s opinions are valued, we look at pros and cons, and we talk to others with experience before trying new things.”

In Patti’s experience, if the Newcombes are thinking about trying new ideas, they’re doing all the research and checking into any rules beforehand. “I have tremendous respect for their work ethic,” she says. “They’re very upfront in their dealings; a very forward-thinking mixed farm.”

“We’re always thinking how we can make ourselves better and do a good job,” Geneve explains.

Feed sustainability
In the mid-90s the Newcombes established an on-farm feed mill. “At the start, it was for the layers and dairy feed and, when we were more comfortable, we expanded into broilers a few years later,” Geneve says. “Anytime we can eliminate a middleman and bring more in house, we benefit.”

Since then, the goal has been to grow most of their feed needs on farm. “We’re a little over 90 per cent self sufficient,” Geneve notes. Corn, wheat, soybeans and forages comprise 2,000 acres. Sometimes soybeans and soy meal are bought in, “depending on the year and how crops do,” she says. “This year we had a really good corn crop, so we had extra to sell and bought in some beans.”

Almost eight years ago, a soybean extruder was added to the farm. In the first year, extruded soybeans were bought in from Prince Edward Island. “Then we could trial it and see how it worked in our rations and how the animals performed,” she says. The extruded beans provide protein in the ration with the side benefit that they reduce the need for purchased fats.

“We very much believe in the no-till philosophy,” Geneve says, adding the family is very environmentally conscious. “We’ve been farming for a lot of years and plan to keep the land productive to last the next 100 years and beyond.”

Business savvy
Two years ago, the family said goodbye to 3 a.m. wake up calls and installed two robotic milking units for their herd of 70 cows. “The total time we spend in the barn hasn’t changed, but we have more flexibility now that the time we spent milking is used for managing the cows,” Geneve says.

Planning is an important step at Cornwallis Farms. Each year the family completes a business management plan. “The first one is the hardest to make,” says Geneve about business plans, “but then you build on it and it gets easier each year.” With the plan, the Newcombes can set goals for the next three to five years. Newcombe says the success of Cornwallis Farms in balancing three commodities, a feed mill and cropping needs “indicates a very well thought out business plan and excellent family management strategy.”