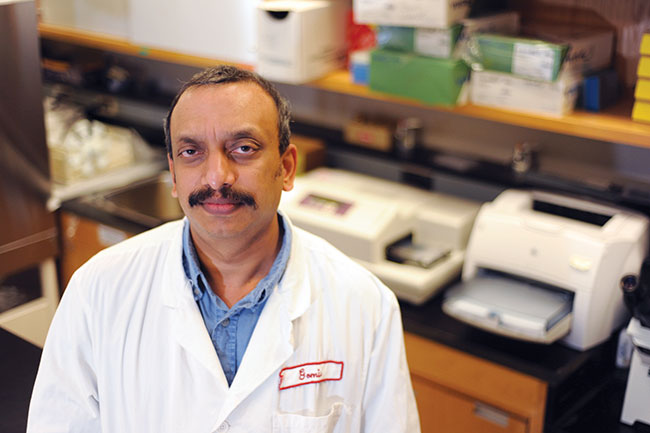 Poultry producers around the world are familiar with the devastating effects of necrotic enteritis (NE), a gastrointestinal disease that causes mortality in young broiler chickens. To date, the only way to successfully control disease outbreaks is through the preventative use of antibiotics – an option that will soon be off limits, as the industry transitions away from the practice.

Professor Susantha Gomis of the Western College of Veterinary Medicine at the University of Saskatchewan has taken a multi-pronged research approach to solving this complex issue. His work has yielded promising results toward NE prevention, without the need for antibiotics.

“In order for antibiotic-free chicken farming to be successful in Canada, we must figure out how to activate a broiler’s immune system and keep it activated,” Gomis says. “The question is how to protect young broilers against NE when their immune system is still developing.”

When an NE outbreak occurs, significant number of birds will die within hours or days due to clinical disease. In subclinical form of NE, birds will reduce eating and grow slowly. “Whatever vaccine we are going to produce, we need to protect birds at the intestinal level too, and prevent the disease and the sub-clinical disease.”

On-farm pathogens
NE is caused by toxins produced by the bacterium Clostridium perfringens (CP) as it grows in the intestinal tract. The disease is influenced by several factors, including diet, immune status and stress.

Birds are at higher risk for NE when they are exposed to certain pathogens that are commonly found in Canadian broiler barns, but pathogens vary across Canada. For example, one pathogen that causes immunosuppression (a variant of bursal disease virus) was found to be circulating in more than 50 per cent of broiler barns in Saskatchewan and B.C.’s Fraser Valley, but prevalence could vary in chicken barns in other provinces.

Gomis’ team developed an animal model and suppressed the immune system of commercial broilers with the bursal disease variant, and then challenged them with different isolates collected from field cases of NE.

Extending immunity
NE outbreaks normally occur after broilers reach at least three weeks of age – once a chick’s maternal antibodies begin to wear off. But Gomis thinks accessing that early immunity – and boosting it – will allow for lifelong protection from NE.

“Let’s say the broiler bird has some protection from its parents when they were vaccinated,” Gomis says. “If we can enhance antibody protection at a high level in broilers by vaccinating broilers at hatch, it will probably be sustained.”

His team has been experimenting with giving vaccines to broilers once their immune system is activated, for a combination of immune stimulation. “Our approach is to use NE vaccine formulation and a very small piece of synthetic DNA to stimulate the bird’s immune system.”

Proof of concept
To test their approach, the team developed an animal model and a delivery system.

They manufactured a nebulizer chamber that allowed them to test their approach on a commercial scale, by facilitating aerosol delivery to 8,000 birds at a time. A sample of broiler chicks received the treatment that combined an immune boost, and they were later challenged with a lethal dose of E. coli.

“We found a significant level of protection in broiler chicks against the E. coli challenge. They were ready to fight against deadly bacterial infection,” Gomis says. The research, published in Poultry Science in January 2021, represents a significant breakthrough in broiler chick immunity.

Gomis hopes that by incorporating the concept of giving the vaccine with different models of immune stimulant, they may be able to stimulate the immune system so that birds only need a single shot of vaccine.

New clues
Due to the complexity of NE, Gomis says they need to approach it from all angles. “We are taking the conventional approach to use pathology to understand the disease at the clinical and subclinical level, and we continue to extend our knowledge about the bacterial level, and now we are using new tools to understand the tiny fractions of information associated with NE.”

His team has recently begun working with The Metabolomics Innovation Centre at the University of Edmonton. Metabolomics is an emerging field of research specializing in the analysis of small molecule metabolites found in living organisms

“It should help us determine how a bird becomes sick, or protected. With this tool we are able to look at panels of biomarkers. We have seen promising results in a short period,” he says. Gomis says his team is still in the lab, developing proof of concept. As a next step, the NE vaccine should be tested in field conditions across Canada.

“There is real potential that we can deliver a vaccine in the hatchery and boost immunity at the same time. That would result in a one-shot vaccine, and make a big difference when the poultry industry can no longer use preventative antibiotics,” he says.

This research is funded by the Canadian Poultry Research Council as part of the Poultry Science Cluster, which is supported by Agriculture and Agri-Food Canada. Additional funding was received from Chicken Farmers of Saskatchewan.