Guts of Growth: The story of antibiotic resistance

The first installment in a two-part series on this important topic. 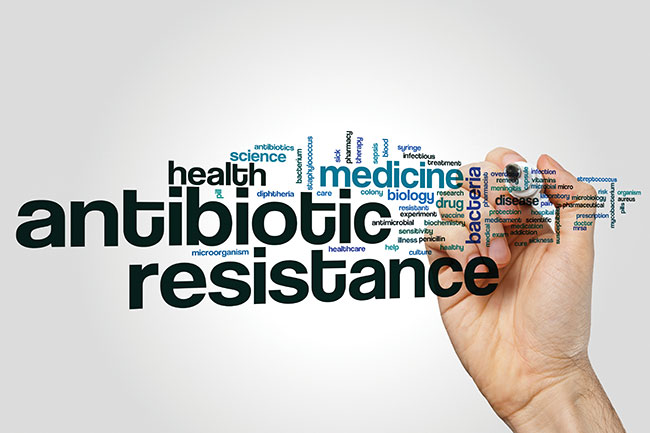 Antibiotic resistance can transfer between bacteria and these bacteria can move between people, animals and the environment. photo credit: © ibreakstock / Adobe stock

Antimicrobial resistance is a broad term that is used for any organism, such as parasites, bacteria, insects, etc., that have developed resistance to something that is used to kill them or decrease their numbers. Over the past several years, the conversation about antibiotic resistance, specifically related to bacteria resistance, on the farm, in pets and in humans has received most of the attention. Antibiotic resistance can transfer between bacteria and these bacteria can move between people, animals and the environment.

There are two major debates in the scientific community: 1) antibiotic resistance bacteria and genes can pass between people, pets, farm animals and the environment, but which is more responsible; and 2) which is more likely to generate resistance, small doses of antibiotics over a long period or high doses over a short period.

Regardless of the opinions on different debates, antibiotic resistance is widespread globally. What follows is the first installment of a two-part series on this important topic.

History of antibiotic resistance
Antibiotics have an important role to play in farm animals, pets and humans when there is a bacterial infection that cannot be controlled by other means. The harnessing of specific compounds from moulds, soils and eventually synthetic means was the start and the continuation of the antimicrobial, including antibiotic, revolution.

In 1928, Sir Alexander Fleming accidentally discovered that “mould juice” could stop bacteria growth and this resulted in the discovery of one of the first mass produced antibiotics, penicillin. Fleming may have discovered the source of penicillin, but many others played a role in developing a simple, quality-controlled way to purify and mass produce the drug by 1941. Interestingly, Fleming was amongst the first to caution against antibacterial resistance and the first resistant bacteria to penicillin was found in 1942.

The “golden age” of new antibiotic discoveries were from the 1950s to the 1970s. Recently, new antibiotics brought to the market are synthetic re-structuring of other known antibiotics and the majority of these are for human use.

New antibiotic compounds are being discovered but still need to go through the quality control, regulatory and mass production hurdles before they can be widely used and would, most likely, be used in human multiple resistant bacterial challenges.

Modern poultry production started around the 1940s with the access to relatively inexpensive anticoccidial drugs. By 1946, research demonstrated that the inclusion of antibiotics in poultry feed increased weight gain and more studies followed showing similar effects in poultry and swine. From this research, antibiotics were used as growth promoters in the industry and by the 1950s this strategy was used without a veterinary prescription in the USA. By 1951 concerns were expressed about antibiotic resistance in agriculture.

Concerns continued to grow by various country governing groups and lobbying consumer groups demanded that countries started to ban antibiotic growth promoters. Reducing the use of antibiotics in animal production became an important objective for the European Union (EU) in the late 1990s. Since promoting growth involves the continuous consumption of antibiotics, this practice was completely banned in the EU on January 1, 2006. Several countries had made the choice before a formal ban, including Sweden in the mid-1980s and Denmark in1996. Since then, New Zealand (1999), Chile (2006), Bangladesh (2010) and Korea (2011) have followed suit.

When antibiotics were introduced, they only killed susceptible bacteria, ones that could be killed, and did not harm resistance bacteria.

With continued use of the same antibiotic there was a pressure placed on the bacteria and only resistance bacteria could survive, replicate, and spread.

The resistance genes stay in bacterial populations because they can increase the survival of the bacteria (fitness) and/or they can increase the virulence of that bacteria. For those genes that increase overall fitness or virulence then the resistance can be long-term and hard to get rid of, whereas genes that only do this when the bacteria is under pressure may only last as long as the pressure is there.

You can think of this like your favourite challenge reality tv show. The contestants that can perform well regardless of the situation are the long-term, hard to get rid of “all-stars”.

In contrast, the contestants that perform well under certain pressures usually only last for the one season that there is that pressure.

Antibiotics are categorized into different classes and within a class there can be further variation. To put it simply, you can think of these classes like the general classes in school – science, English and geography. Within each of these classes there is further distinction such as chemistry and biology within science and this would represent the distinctions between antibiotics within the same class. Antibiotic resistance genes can have mechanisms that act against one class or multiple classes of antibiotics.

Antibiotic resistance genes can move from bacteria to bacteria regardless of whether the bacteria are good, opportunistic or bad. Depending on how these genes move between bacteria is one way to determine how the bacteria may gain multiple resistance.

If you expected to receive one hot dog but you received one with ketchup and mustard, this would represent co-resistance where two genetically linked genes are close together and are transferred at the same time. If you expected one hot dog with ketchup but received one hot dog with “mayochup”, a mayonnaise and ketchup blend (yes, it’s out there), this would represent cross-resistance where a single gene may act against multiple antibiotic classes. This transfer of resistance genes can help explain resistance to multiple antibiotics.

Additionally, resistance can develop from other substances used to kill bacteria such as high levels of trace mineral salts (e.g., zinc and copper sulphate) and low acid levels used over a long time (e.g., pH 3 tolerance). Once resistance is developed to these other substances the resistance genes may be common or beneficial for antibiotic resistance and can pass between bacteria.

Conversely, other alternative products used in animal nutrition to modulate microbial populations may act differently in ways such as to selectively remove certain bacteria, feed beneficial bacteria or allow beneficial bacteria to grow. These different modes of action have a knock-on impact on the environment in which resistant bacteria thrive which is not beneficial to their survival.

How does antibiotic resistance impact the flock?
Each bird has their own unique microbiota, which includes bacteria, that can be found in the intestine, respiratory tract, on the skin and elsewhere. When we talk of the intestinal bacteria microbiota specifically, these bacteria contain many genes. These groupings of genes can include resistance genes.

On a flock level, there is a “core resistome” that includes the resistance genes that every bird in the flock will have.

This core resistome may come from all the bacteria interacting with each other, transferring genes and birds picking up bacteria from their environment. On the individual level, there is an “accessory resistome” that represents the variable group of resistance genes that are bird specific.

In terms of poultry health and performance, this is discussed on a flock level rather than by the individual bird. As a result, the core resistome, or the resistance genes the flock shares, is important when determining what antibiotics may work well for a challenge.

Due to the risk of resistance, veterinarians complete a sensitivity analysis on the diagnosed bacteria to ensure the correct drug is used to combat the challenge. For example, if a bacterium were to show up as resistance to certain antibiotics on the test then those specific antibiotics would not be helpful against that bacteria.

Look for second part of my two-part series in an upcoming issue of Canadian Poultry, in which I’ll outline where Canada stands in terms of antibiotic resistance and what else can be done. References available online at candianpoultrymag.com.