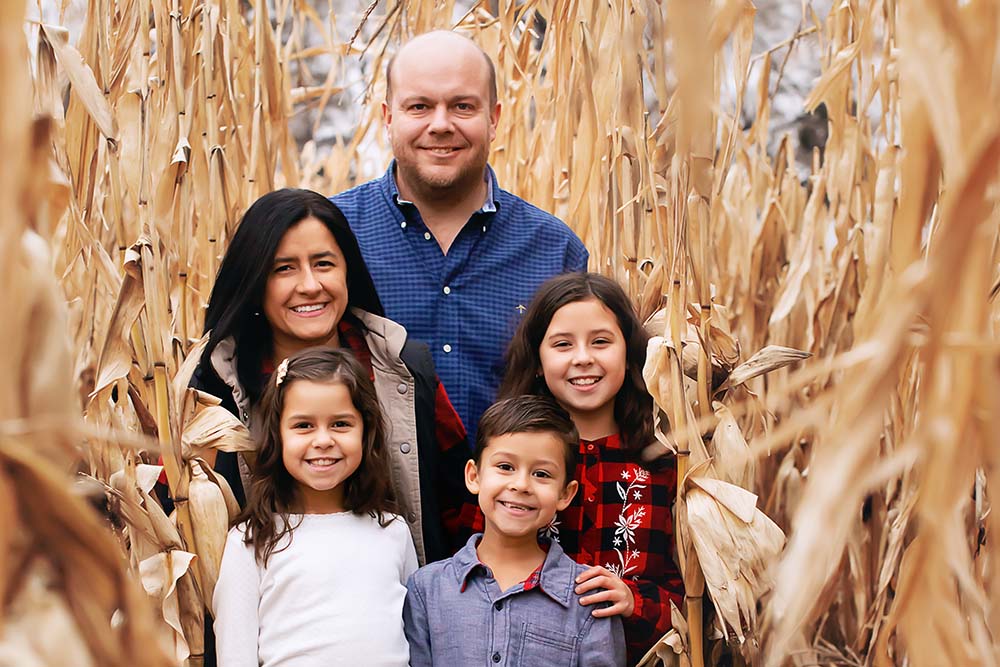 Jason and Esther Thiessen, pictured here with their three children, were originally grain farmers before expanding into egg production 10 years ago.

Diversification – it’s something that a lot of Canadian farmers are thinking about or have already incorporated within their operations. Leading up to 2010, Manitoba grain farmers Jason and Esther Thiessen set their eyes on diversifying into egg production.

They had already expanded into some custom grain cleaning for other local farmers in 2005. Luckily in 2010, their names were chosen in the provincial egg quota lottery. They set about building a barn for 12,000 layers (Salmet enriched housing system) and welcomed their first flock of 6,000 in January 2011.

However, besides diversification, Jason and Esther had other reasons for wanting to become egg farmers. “It provided a safe way for our children to be involved on the farm, now and in the future,” Jason Thiessen says. “And thirdly, it provided an opportunity with low risk. It’s a stable type of farming, thanks to supply management.”

Thiessen represents the third generation to own and operate the family grain farm south of Winkler, which he and Esther run with his parents, Peter and Irene, and their three children, Abigail, Cossette and Tobías. They farm crops such as edible beans, corn, sunflower, millet, canola and wheat.

In 2017, they partnered with Esther’s brother Josh to manufacture their own brand of wild bird feed, which carries the Schoen Farms name on the label. The entire farm business has five full-time and four part-time year-round employees.

Early egg farming days
Having no knowledge of egg farming, Jason and Esther had a huge amount of learning to do when they first started out. “We depended completely on other members of the egg industry,” Thiessen explains. “The staff at Manitoba Egg Farmers (MEF), pullet and feed suppliers, grading station staff and other egg farmers, all of them were very willing to help us, and they deserve a lot of the credit for our success. From my experience as a grain farmer, this is what makes the egg industry unique. We help each other!”

Thessen narrows down their main egg farming challenges in the early days to temperature management, time management and the achievement of consistent egg size under different feed regimes. Regarding temperature, during their first few summers of egg farming, the hens were experiencing more heat in the barn than desired, so the Thiessens added a misting system. The use of the misters is able to lower the ambient temperature by up to 6°C on very hot days.

Thiessen adds, “Another major barn change was upgrading the environmental controller to allow us to remotely monitor barn temperature, water and feed usage as well as recording flock information and egg production. We also automated with egg packing. Even with our smaller flock size, automation is important to manage your time.”

Getting feed right
During various points since they started egg production, the Thiessens have tried different feeds: regular, all-vegetable and one rich in omega fatty acids. Each of these feed types presented different challenges in terms of maintaining proper egg size. “As the hen gets older, the feed for specialty eggs can speed the process of egg enlargement,” Thiessen says. “We worked closely with the feed supplier to adjust the feed ingredients to maintain the proper size.” However, after eight years of producing specialty eggs, the Thiessens decided to produce classic eggs.

The Thiessens also added a feed mixer in 2014 to allow them to use their own grain. It’s obviously efficient and economical, and also provides consistency in feed for the hens. But Thiessen points to another purpose for making their own feed. “It’s important to us to have a good understanding of feed ingredients,” he says, “and their nutritional benefits for the hens.” 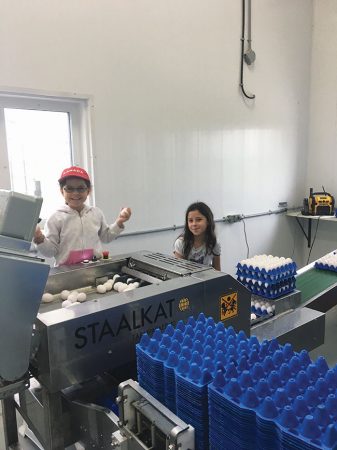 One reason the Thiessens expanded into eggs was because it provided a safe way for their children to be involved on the farm.

Recognized for excellence
Schoen Eggs has consistently attained a superior rating under the national on-farm food safety and animal care programs over the years. In addition, the Thiessens have been recognized for excellence as the winners of MEF’s 2019 Farmer of the Year Award, an honour that encompasses exemplary on-farm food safety, production management animal care initiatives.

The yearly award also recognizes community service. “We enjoy sharing information about egg farming with our neighbors and the public,” Thiessen says. “And serving our local community and the industry is important to us, so we look for opportunities to give back.” These include serving in their church, supporting breakfast in the local community centre, supporting fundraisers and participating in MEF Ambassador’s Program through such events as The Red River Exhibition in Winnipeg and the Royal Manitoba Winter Fair in Brandon.

Thiessen has also served on the MEF Audit Committee for several years and participated in MEF’s Director Development program. Both, he says, were very educational. “If I can summarize it to a statement, it would be: ‘The strength of our industry is farmers working together, in provincial and national levels.’ I have enjoyed connecting with farmers from all over Canada.  We share the same challenges but also benefit from a strong industry.”

Even though some might have expected it, for Thiessen, winning the Farmer of the Year Award was a surprise. “We have many Manitoba egg farmers deserving this award,” he says. “The goal on our egg farm is to follow the program to benefit the hens which results in a clean, safely produced egg. This award recognized the hard work of our team.”

Future plans
In terms of future plans for egg production, the Thiessens would like to install a heat recovery system in the barn and make improvements to air quality. They would also like to find value for broken eggs and are still in the research phase for that.

Looking forward, when asked to identify the biggest current challenges for the egg sector, Thiessen points to succession planning. “How is the next generation going to afford the transition with current quota values,” he asks. “Also, I believe maintaining supply management will be a challenge. With a small voice, how do we convince the majority that our system benefits everyone? Lastly, public image. It will be a challenge to navigate the question of whether we make our decisions on science or public pressure.”

In his spare time, Thiessen enjoys building practical equipment on the farm. Esther enjoys gardening and painting. All the children enjoy checking the hens and collecting eggs in the weekend with their Dad, but each of them has their own interests as well. Abigail, the oldest, enjoys all animals and painting. Cossette enjoys horse riding and baking. Tobías enjoys soccer and tractor rides. And grandparents Peter and Irene enjoy camping and spending time with their grandchildren.

To close off, Thiessen would like to take this opportunity to thank his family and staff for their contributions and dedication to their egg farm. “To the previous generations,” he adds, “thank you for your vision, which provides opportunities for the future!”