Thinking outside the tunnel 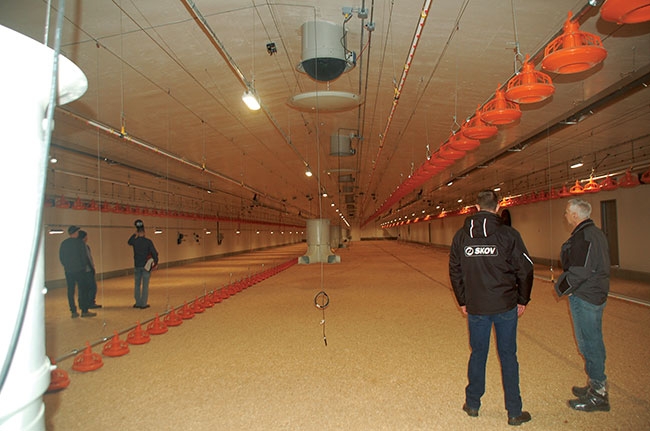 When Andre van Kammen of Cedar Acres Farm in Chilliwack, B.C., decided to build a new barn for his newly-acquired chicken quota (from his in-laws), he thought outside the box – or, in his case, outside the tunnel.

Instead of using tunnel ventilation, as is the norm for Canadian chicken barns, van Kammen has installed a Skov LPV (low power ventilation) chill unit system.

Though this is the first chill air system in North America, Skov, a Danish manufacturer of climate and farm management solutions, has installed several hundred of these units in New Zealand, says Mikkel Overgaard, who recently moved from Australia to become Skov’s business manager in North America.

Although the price isn’t much different than a tunnel system, van Kammen believes it will reduce operating costs, as it requires less power and less heat. While he admits some of his fellow growers are skeptical, he is confident the chill air system will work well. He also welcomes being a guinea pig for the system.

“There’s always a new way to do things and if there’s a better way, I’m open to it,” he says. “Skov says the system will work and I believe them.”

Overgaard is even more exuberant, saying, “I believe this will be a top performing barn in B.C.” He stresses each installation is custom-engineered. “Skov uses the address of the farm to determine the specific climatic conditions the system needs to be designed for.”

Each chill unit is comprised of a round cylinder, which houses the fan. Air is blown out through six outlets spaced equidistantly around the base. The units are hung from pulleys mounted on the ceiling, allowing them to be raised or lowered as required.

The fans move the air at 1.2 to 1.5 meters per second or about 200 to 280 feet per minute, the low end of what tunnel ventilation provides in air speed. During the summer, the units are lowered so the air is blown between instead of above the birds.

“The chill air system will reduce experienced temperature in the barn by up to 7°C,” Overgaard states, adding the temperature is also more uniform through the barn. “In a tunnel system, you can have a difference of five to 10°C along the length of the barn.”

Uniformity of both temperature and air quality are two reasons why chill air systems could gain in popularity.

Although he has no experience with the Skov chill air system and therefore cannot comment on its effectiveness, Bill van Heyst, a University of Guelph research engineer who has been studying ventilation systems for years, says the longer the barn, the more likely there could be issues with tunnel ventilation.

A look at the new broiler barn at Cedar Acres Farm in Chilliwack, B.C.

Overgaard says the system can also prove useful in winter. Instead of using the units to reduce air temperature, they can be hoisted up to the ceiling during the winter and used at low speed for heat recovery.

“You can blow the heat down from the ceiling and reduce how much new air you bring into the barn,” Overgaard explains.

In addition to the chilling cylinders, chimneys are spaced along the ceiling to vent hot air out of the barn. Fans along the side can augment air intake from the inlets along the top of each sidewall.

“The fans are made of non-corrosive plastic. They run at variable speeds and can move 25 per cent more air than competitors’ fans,” asserts Tyler de Boer of AgPro West Supply. AgPro West, a new poultry equipment dealer, is staking its business future on Skov and Big Dutchman.

While both have been building poultry equipment for many years, there has not been a lot of uptake on those lines in B.C. recently. “This is the first Skov installation in B.C. in many years,” de Boer says.

Skov has also placed misters in front of the air inlets atop the sidewalls. The misters can reduce the temperature of incoming air by up to 4°C. “Between the misters and the chill units, we can reduce the summer barn experienced temperature by over 10°C,” Overgaard states.

While Skov is putting a lot of its energy into chill air units, it has not entirely given up on tunnel ventilation. Overgaard notes that in areas with extreme heat, such as in Australia, Skov will use a combination of chill units and tunnel ventilation to bring temperatures down to acceptable levels. However, he notes most of Canada has temperatures similar to those in New Zealand so just using the chill air units should be sufficient.

The new Cedar Acres barn is 60-feet wide by 400-feet long and designed to house up to 32,000 birds. Van Kammen says it will initially house only 30,000 birds. For that size of barn, the system includes eight individual chill air units, meaning each unit needs to cool about 3,000-square feet.

Because each unit needs to cover a greater width (60 feet) than length (50 feet), outlets facing the walls are slightly larger than those pushing air lengthwise. It also includes seven chimney fans and three wall fans in each of three sections.

The new barn incorporates a vaulted ceiling instead of the flat ceiling found in most poultry barns. Although Harry van Hemert of Intercoast Construction says a vaulted ceiling adds to the building cost as the trusses cost $1.50 to $2.00 more per square foot, de Boer says the vaulted ceiling is critical to the overall efficiency of the ventilation system.

“It gets the air moving better,” he explains. “We want to see the air go up and fall back down at the temperature we like.”