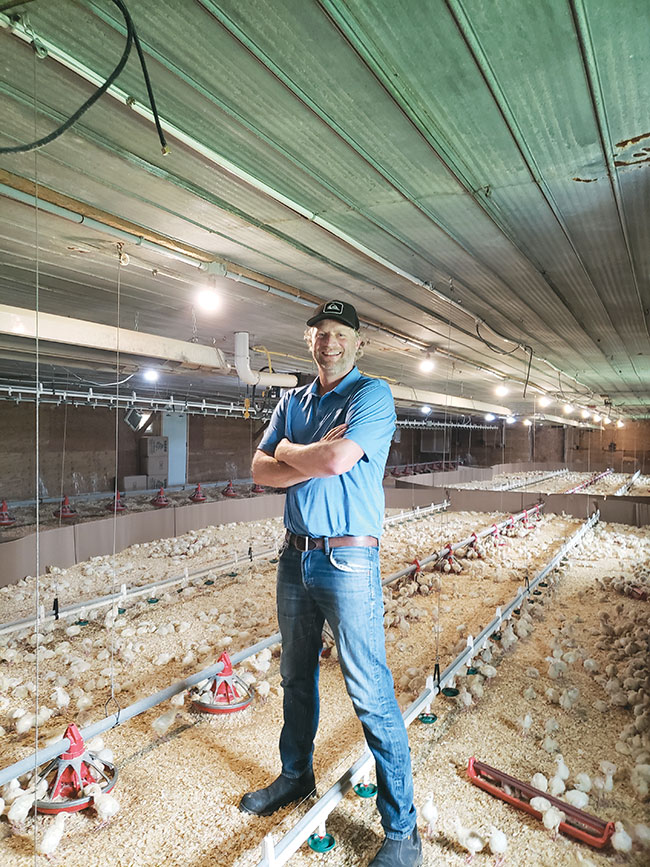 For Tim deWit, there were many reasons to switch to organic turkey production 10 years ago. He saw it as a way to use his knowledge, taking production to a new level and seizing market opportunities in the process. It would also mean reduced environmental impact on his farm and side-stepping the concerns related to antibiotic resistance.

With his wife Katrina, DeWit produces organic turkey and cash crops just west of the town of Embro, Ont. At Fowl Play Farm Ltd, the deWit family also produces lamb, but it’s not certified organic right now. DeWit has been a director at Turkey Farmers of Ontario (TFO) for almost four years and has also served in the past on the board of the Poultry Industry Council (PIC).

It was in 2009 that the DeWits sold their five-acre farm (where they already produced turkey) and moved to their current farm location. “When we arrived, there were empty older broiler barns and we converted two of them to turkey,” deWit explains. “We also converted the 100 acres to organic corn, soybeans and wheat and we also run a flock of 200 ewes.

“We run our farm with family labour except for turkey catching and some custom field work. Our three kids, Isaiah (17), Luke (15) and Charlotte (13), help out daily on the farm with regular chores and with moving turkeys to the grow-out barn.”

In 2014, they renovated their two-storey brooder barn, adding new equipment, insulation and electrical. In 2017, they tore down one of the old barns and built a new organic turkey grow-out barn, 18,000 ft2 in size and with improved outdoor access required for organic production.

Making farming work
DeWit was raised on a dairy farm, which his older brother now operates. He knew growing up that he wanted the farming lifestyle of working with animals and crops.

With the high costs to get into farming, he knew he would need off-farm income to make farming work. In 1998, after living and working in New Zealand for a year, deWit started a job with Alltech selling feed ingredients and additives across Ontario.

He looked at his options for farming and chose turkey. It’s not as labour-intensive, and allowed deWit to balance working off the farm full-time and running the farm after hours. He worked for Alltech full-time until 2017.

Before 2011, when he made the switch to organic, deWit had made many industry connections at Alltech and also saw the many opportunities to be had in niche poultry products. “I was seeing companies in North America and beyond successfully doing organic,” he says, “and I had also learned a lot raising antibiotic-free flocks. I connected with Yorkshire Valley Farms (Canada’s largest organic meat company) and Jones Feed Mills and went for it.”

By fall of 2011, the deWits were selling organic turkeys to Yorkshire, which was new at the time, and they still sell all their production to the company today. Every year, they produce three flocks of hens and two flocks of toms, totaling about 280,000 kilograms.

Organic philosophy
DeWit is firm that “the decision to move to organic was one the best decisions we’ve made. The demand was there and it’s still there and there was not a steady supply of organic turkey on the market when we started.”

Organic farming, he adds, was also a great way to increase farm cash flow without having major capital expenditure. And he had the synergies of using the manure from their turkeys and sheep on the fields, a critical key to making organic cropping work.

“Right now, I age our turkey litter but I want to fully compost it, as it’s better for the soil,” deWit says. “I need to buy some equipment so that I can windrow it and turn it a few times and I’ll add additional carbon from the sheep manure.”

All that aside, deWit is simply attracted to the whole organic philosophy, with livestock providing fertilization, no antibiotic use and no chemicals applied to the fields. “It’s good for the environment, overall, livestock and human health,” he says.

DeWit sells his grain to Jones Feed Mills, which built a state-of-the-art organic mill a few years ago, and also to Beechwood Ag Services. He notes that due to complications of COVID-19, the supply of imported organic soybeans (from India) is limited now for Canadian feed mills. This has significantly impacted prices, and deWit’s organic soybeans are, therefore, in hot demand this year. 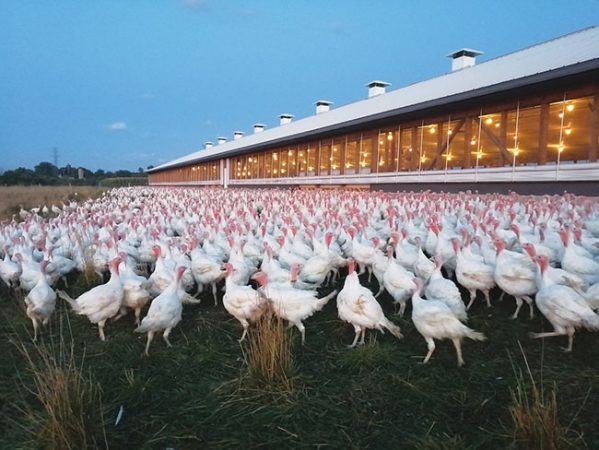 Industry involvement
During his time as a director with PIC, DeWit deepened his belief in the importance of research to keep the industry moving forward and solving current issues.

Reflecting on his time so far at TFO, deWit describes the board as “great,” and notes that “we all have individual strengths that we bring to the table.” He says that an ongoing challenge for the turkey industry has been achieving consistent growth – and that growth will be more critical than ever in the near future to help offset the imports that will coming into Canada once recent trade deals are ratified.

Turkey is a great product, deWit states: great tasting, high in protein and low in fat. To build demand, the industry simply needs to continue to focus on product innovation.

In addition, deWit adds, “TFO has really supported those who want to go organic and other niche markets. They want to support companies who want to expand the turkey markets. But organic producers are still a small part of the Ontario turkey industry. I think there are about six of us doing organic out of about 155 producers in total.”

But from what deWit understands, there are huge opportunities for organic turkey and other meats, if volume can be increased. “In talking with Yorkshire Valley Farms, it seems that there are great opportunities with the bigger retailers that we can collectively take advantage of,” he says. “We just need more supply.”

Personal and farm goals
DeWit wants to do his part to grow the organic industry by growing his own production, but most of his desire to expand Fowl Play Farm is to ensure the farm business can support the next generation of his family. Growing the farm’s acreage also means that investments in specialized cropping equipment will make more financial sense.

“We’d like to achieve 30 to 40 per cent growth in turkey production over the next five years,” DeWitt says. “We’ll need to build, as our current facilities are maxed. We also see the opportunities in the under-supplied lamb market in Canada.”

In terms of their leisure time, the deWits’ interests are heavily tied to their children. “Currently, both my wife and I help coach as well as help run the local soccer club,” he says. “We also help out with our hockey teams. I still try and get out and play soccer as well.”