Developments from the alternative housing front. 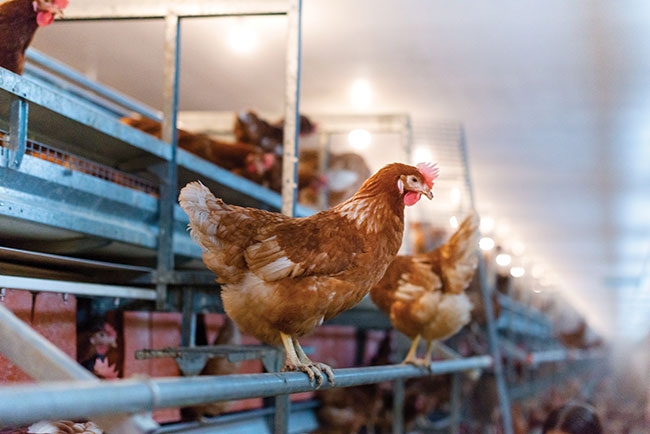 While industry insiders say some food companies are wavering on their pledge to go cage-free by 2025, none would confirm this on the record. All photos courtesy of Egg Farmers of Canada

Firstly, numerous Canadian food companies have made headlines in recent years by pledging to source only cage-free eggs – in most cases, by 2025. However, sources tell Canadian Poultry  that some of those companies have since privately backed out of these commitments. A few have reportedly opted to source eggs from hens in enriched colony housing instead, perhaps driven by availability and cost considerations.

Canadian Poultry checked in with the major restaurants and retailers that have publicly declared their intentions to go cage-free. Few responded to multiple requests for comment and none would go on record as having changed their plans for layer housing. However, those companies that did respond – McDonald’s, Subway and Loblaw – reconfirmed their cage-free commitments.

The grocer took it a step further. “Loblaw Companies is committed to transitioning all shell eggs sold in our stores to cage-free by the end of 2025,” the company said in an emailed statement. “We are also happy to report that as of January 2019, our PC shell eggs are free-run.”

One company that might be mistakenly described as having backtracked on a pledge is A&W Canada. In 2016, when companies were announcing cage-free by 2025 commitments, the fast-food restaurant issued a press release that got a lot of traction. It was widely interpreted by mainstream media as the company vowing to go cage-free within two years.

In actual fact, it was only committing to supporting research to find a cage-free housing solution that better suited its specific needs. Today, the company proudly states on its website that it still sources eggs from hens in enriched colony housing, explaining that there still aren’t enough cage-free eggs available to meet its demand and that furnished cages are a healthy, humane alternative.

The second development sure to affect Canadian egg producers’ transition away from conventional cages was revealed at Egg Farmers of Ontario’s AGM in March. At that event, chair Scott Graham made an exciting announcement that will affect egg farmers nationwide.

“Since the cost of production that determines egg prices is based on cost surveys for the predominant conventional system, we needed to develop transitional pricing to ensure fair compensation to egg farmers that are retooling, and to send the correct price signals to those making decisions about layer housing on their farms,” he said.

“A national committee to deal with that issue has settled on a differential of 11 cents and this will be the net price difference in the farm price for eggs produced in enriched housing across Canada beginning this September.”

While egg farmers in Ontario have already been receiving a 10-cents/doz. premium for enriched production since January 2017, this change is expected to make a significant difference in provinces that currently lack such a payment.

Egg Farmers of Canada (EFC) explains that as the industry transitions to alternative housing systems in line with market requirements, EFC, egg boards and industry have been collaborating to assess the cost to produce eggs. They firstly looked to account for the additional cost of producing eggs in enriched colony housing systems. In the future, the stakeholders plan to conduct a broader analysis for other production systems.

Producer impact
Canadian Poultry asked two major Canadian egg firms to weigh in on these recent developments – that is, how decisions on alternative housing are being affected by food company commitments, the impending national price differential and so on. Egg producer and processor LH Gray and Sons referred us to the Canadian Poultry and Egg Processors Council (CPEPC).

However, national egg producer and processor Burnbrae Farms did weigh in. Burnbrae is the sole provider of eggs to McDonald’s Canada, which has publicly committed to sourcing only free-run eggs by 2025. “Our customers who have committed to buying free-run eggs have stuck with that commitment and understood about the premium at the outset,” says Ian McFall, Burnbrae’s vice-president of foodservice and industrial sales.

At the retail level, McFall reports that eggs from free-run systems are not moving as well as expected. “Consumers are certainly interested in these eggs, but not as much as anticipated,” he notes. “We haven’t had any retail customers renege on their free-run commitments due to slow sales, but in general they are not making long-term commitments either.”

He adds that, “Due to the less-than-enthusiastic acceptance of free-run by Canadian consumers, at this time, most producers are retooling into enriched colony systems. At Burnbrae Farms, we are making production decisions based on demand.”

When Canadian Poultry asked CPEPC for comments from its grader and processor members, Margo Ladouceur, manager of egg sectors, explained that each of them looks at sales, forecasts what they need and makes arrangements with producers to meet those needs. That said, there are more non-conventional eggs available to CPEPC members than they have orders for.

EFC CEO Tim Lambert says his organization is watching global trends “with great interest”, as what’s happening in various other countries offers lessons for Canada. “However, unlike other countries, our transition is coordinated, systematic and looks to produce what the market demands,” he notes.

“Promoting and maintaining a range of production types and egg varieties is a core focus for our industry. Central to this approach is a balanced portfolio of production methods that maintain a nimble and responsive industry and upholds consumer choice, while minimizing surpluses and shortfalls.”

Egg farmers, he adds, are choosing what type of housing to convert to based on market requirements and also their unique needs. For instance, the size and location of their farm as well as the potential need to buy new land and build new barns.

Lambert notes that, as of January 2019, the vast majority (71 per cent) of Canadian eggs are still being produced in conventional cage systems. About 14 per cent are from hens housed in enriched colony systems and 14 per cent from hens in specialty housing, which EFC defines as free-range, free-run and organic.

“This represents a slight shift towards both enriched colony housing and specialty housing since the transition [away from conventional cage housing by 2036] was announced in 2016,” he says. Lambert adds that, based on data from global research firm Nielsen, only seven per cent of Canadian retail egg demand is for eggs from hens in specialty housing.

Consumer impact
At the retail level (putting aside organic eggs, and eggs enriched with omega fatty acid and vitamin D), free-run are the most expensive eggs. Online research with major Canadian grocery chains shows the cost of a dozen large, white, free-run eggs ranges from $4.49 to $6.00, enriched colony (they are branded as ‘nest laid’ or ‘colony coop’) from $4.09 to $5.00 and conventional (battery cage eggs) from $2.00 to $2.49.

Canadian Poultry asked EFC if there is now, or will there be, a national strategy put in place to ensure that all Canadian consumers are able to buy the much cheaper (conventional cage) eggs right up to 2036. Will there be stores in certain regions of Canada that will no longer have cage eggs because the eggs in that area all happen to be produced on farms where hens are housed in alternative housing?

“The systematic and coordinated approach to transition the industry away from conventional housing is driven by customer demand and the market,” Lambert says. “This is will help ensure continued access to the eggs that consumers want and count on at affordable prices.”

He also weighed in on a strategy other countries have used to prevent egg consumption from declining due to higher prices, as more expensive alternative housing egg volumes increase while cheaper conventional egg volumes decrease. This strategy involves increasing the price of conventional cage eggs slowly – a few cents per year – so that consumers get used to higher egg prices.

Lambert started by saying that egg consumption in Canada is presently increasing. “In 2018 alone, the retail sales of table eggs increased by six per cent,” he notes. “By using the market as the guide, the approach is to match the supply of eggs with demand. It is also important to keep in mind that the retailer sets the price of eggs based on what the market can bear. The biggest determinant of how much consumers pay for eggs is where and when we shop.”

CPEPC’s Ladouceur gave the processor’s view of this strategy. “it comes back to what we’ve stated before — graders will be working with farmers and egg boards to meet the commitments on hen housing (including the phasing out of conventional housing by 2036),” she says. “They will also work with customers to ensure they have the supply of eggs they need to meet customer demand.”