January 9, 2008By B. Rathgeber J.L. MacIsaac and Baoyan Wang

Some strains of commercial broilers are more excitable than others and are prone to inflicting damage on one another. 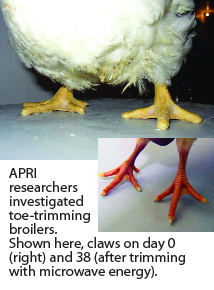 Some strains of commercial broilers are more excitable than others and are prone to inflicting damage on one another.  Minimizing carcass scratches is essential to ensuring high quality processed product.

Additionally, carcass scratches are often associated with cellulitis, which is the most common reason for carcass condemnation across Canada. Carcasses from birds on increasing day length consistently have more damage to the skin in the form of scratches than birds on continuous light.

Toe-trimming or clipping is a procedure widely used in the turkey industry to reduce carcass damage.

Traditionally, turkeys have been toe trimmed using a procedure similar to beak trimming. This is a labor-intensive process and contributes to the rising costs of poultry production. Currently, equipment is in use that uses microwave energy to sterilize the germinal tissue from which the claw grows on newly hatched chicks.
The objective of this study was to determine if treating the toes of day old broiler chicks with microwave energy to disrupt claw growth would influence growth performance and cause stressful behavior that could impact meat quality and animal welfare.

TRIAL
Male and female broilers (728 each) were grown under two photoperiod programs known to influence bird activity and growth rate.  Half the birds from each sex were toe-treated using a Microwave Claw Processor (Nova-Tech Engineering Inc., MN, USA) where each of the three front toes was treated with microwave energy for 0.8 seconds.

All broilers were given 24h light for the first three days. From day four on, half the birds from each sex were on a continuous light schedule while the other half was subjected to an increasing photoperiod program (refer to Table 1). Feed and water were available ad libitum.
>
All birds were given the same starter, grower, and finisher rations. 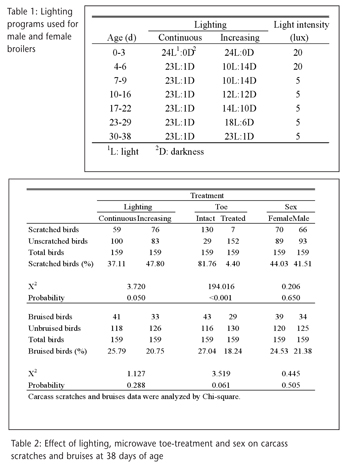 RESULTS
Throughout the trial, birds on the increasing photoperiod were lighter than those with continuous light (CL). Bird weight at slaughter was 2.05 kg for the CL and 2.06 kg for the increasing lighting program. Toe-treated birds had lower body weights on day 7, but were the same weight as untreated birds by market age. Neither the microwave toe-treatment nor the lighting programs had a significant effect on the feed conversion ratio (FCR).

Toe-treated birds had significantly stronger skin than their untreated counterparts. This may be related to the fact that the activity of enzymes involved in collagen turnover where present at different concentrations in blood plasma samples. The number of bruises on carcasses was less for toe-treated birds, also indicating improved skin structure (refer to Table 2).

The increase in mortality for toetreated female birds should be addressed further to determine whether adjustments in microwave exposure can reduce this problem while maintaining the benefits of reduced carcass damage.

The reduction in early growth caused by the toe-treatment suggests that the toe-treatment could pose an initial stress in the broilers, although the pain endured by the bird early in life may outweigh the chronic pain of lacerations to the skin of birds later in the rearing period.

Funding for this project was provided by the NS Dept. of Agriculture & Fisheries, the Poultry Industry Council and the province of Newfoundland and Labrador.