Award recognizes those who have impacted the poultry industry and USPOULTRY. 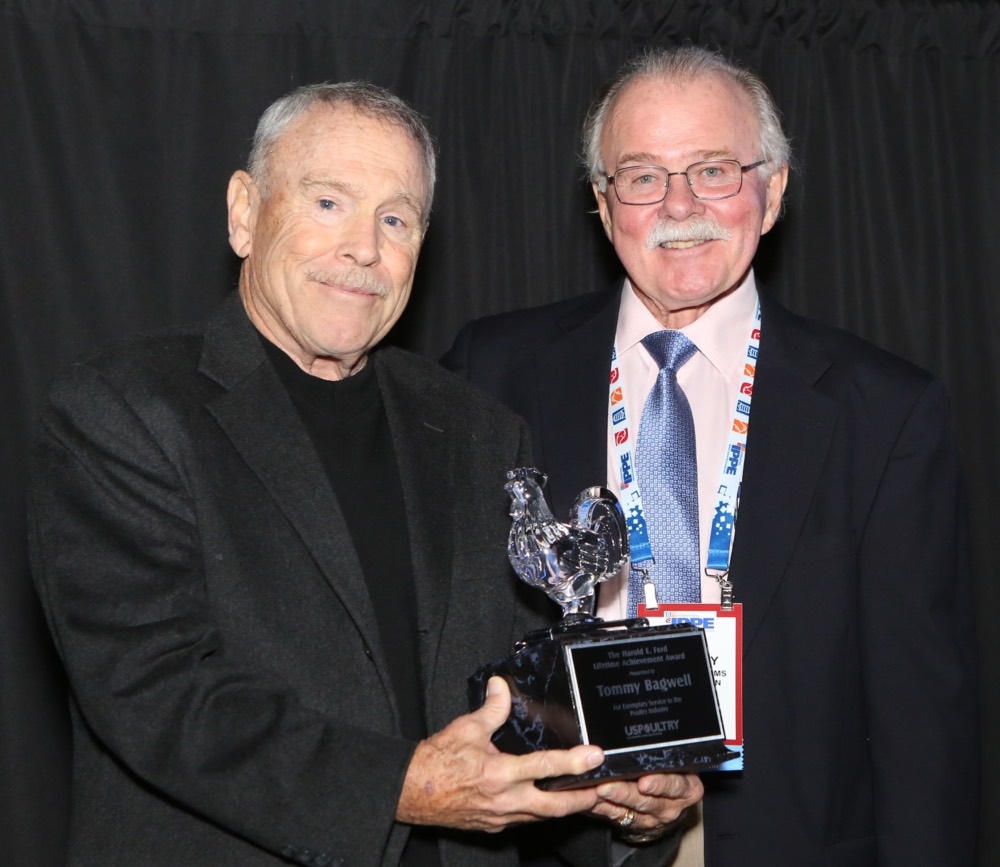 The Harold E. Ford Lifetime Achievement Award is presented to an individual whose dedication and leadership over the years have far exceeded the ordinary and impacted both the poultry industry and U.S. Poultry & Egg Association in an exemplary manner. The award is presented non-annually and when the Awards and Recognition Committee unanimously recognizes and endorses the need for occasional, unique recognition for exceptional contributions.

“The connecting ties and friendship between Tommy, American Proteins and USPOULTRY are long and deep. In fact, it was Tommy’s father, Leland, who hired Harold Ford, for whom this award is named. It is a privilege to work with Tommy, and we are honored to present this award,” remarked John Starkey, president of USPOULTRY

A native of North Georgia, Bagwell earned a degree in economics from Clemson University with a minor in Spanish. He also completed graduate studies in industrial management, business administration and economics at Clemson and the University of Georgia.

In 1969, Bagwell began his professional career at North Georgia Rendering Co, now known as American Proteins, Inc. In 1972, upon the death of his father Leland, Bagwell became president. Today, American Proteins services the poultry industry from plants in Georgia and Alabama and supplies feed ingredients throughout the world. American Proteins was sold to Tyson Foods last year.

Bagwell has been an active member of the Republican Regents and Republican Governors Association for the past several years. He was appointed a member of the Governor’s Energy Policy Council. He has also served as election observer for the Carter Center in Venezuela and Peru.

Bagwell is involved in numerous local organizations. He has been a board member of the NE Georgia Council of Boy Scouts, charter president of the Forsyth County Rotary Club, and served as a trustee of Kennesaw State University, Lanier Technical College and Brenau University. He also serves on the U.S. Poultry & Egg Harold E. Ford Foundation board of directors. In 2014, Bagwell received the Philanthropist of the Year Award from the North Georgia Community Foundation.