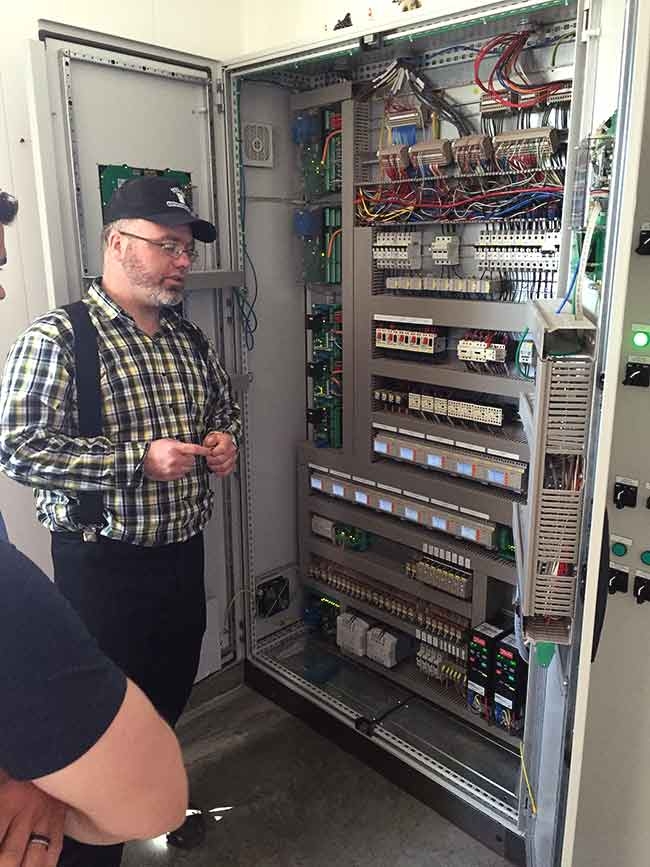 It’s one of the most, if not the most, efficient and high-tech poultry barn in Canada – a layer barn/egg cooling facility that offsets the consumption of electricity and natural gas heating through the use of solar electricity generation and many cutting-edge technologies.

The total estimated annual electricity and natural gas needs of the facility are between 80,000 to 120,000 kWh (with one GJ of natural gas consumption equivalent to 278 kWh). The existing solar panels generate about 29,000 kWh, so at this point, only about a third of the facility’s power needs are taken care of on-farm – but it’s a facility which holds many keys to how a layer facility might be designed and operated so that it produces as much energy as it consumes, known as “net zero.” Egg Farmers of Alberta describes the site as “establishing precedent for what additional solar (or other energy generation) would be required to get to net zero energy consumption,” and that it will “eventually provide all of the information we need to in order to communicate what a net zero layer barn looks like, and what it costs.”

The free-run aviary barn is owned by the Brant Hutterite Colony (population 105) in Brant, Alberta (near Lethbridge) and houses 13,000 laying hens. To help offset some of the construction costs, the colony received a $250,000 grant from the Alberta government. Its partners, Egg Farmers of Alberta (EFA) and Alberta Agriculture and Forestry (AAF), also secured some funding from Agriculture and Agri-food Canada (through Growing Forward 2) to help make the project a reality.

The idea for a net zero egg facility came about in 2014 after EFA had completed a “life cycle analysis”(an examination of resource use and other factors) of the province’s egg farms. It showed that on-farm energy use represents nearly 15 per cent of the climate change impact of egg production in Alberta. “EFA was and is in the process of building plans and strategies to improve the carbon footprint of egg production and this [project] was a natural fit,” notes EFA Industry Development Officer Jenna Griffin. “Similar projects were initiated with Pork and Milk, but each organization took it in a different direction and I believe we were the only ones that went down the path of building a commercial facility.”

To find an egg farmer partner, EFA sent information to all those in the province known to be building a new facility and narrowed it down to a few that met certain criteria. “For example, we wanted the facility to be near a major urban centre, and be of a size that was representative of an average Alberta egg farm,” says Griffin. “The intent was to give ourselves the best chance of successfully getting to net zero and to ensure that the data generated is applicable to most farms.”

In describing why Brant Colony went ahead, Brant egg manager Darrel Mandel highlights the collegiality within Alberta’s egg industry. “There is a passion for your fellow producer,” he says. “When one has achieved a new and efficient way to better his or her farm…it is shared…For us, it did not seem right to let this pass and not do it for the industry.” The agreement with EFA and AAF required that Brant Colony provide data about barn energy performance and also install a web cam inside the barn, and Mandel says that while “providing data did not seem to be such a big issue” at the time, “agreeing to install cameras, allowing tours, were some big things to consider, and there were multiple reasons why we felt that first off, why should the public see what we or our birds are doing? It seemed like a very strange and out-of-place puzzle piece…[but] then we asked ourselves, what is there to hide? Why is this making us afraid on sharing what we do best, that being caring for our animals?…Adding the cameras would not change our everyday lifestyle. We love our animals…They need to be treated with the best care possible. By doing that, it gives the consumer a healthier egg…and gives us farmers an accomplishment that we are proud of and willing to share, be it on live stream or face to face with the public.”

MAKING CHOICES
Using input from EFA and AAF, Brant Colony designed the building and purchased very high-efficiency systems and equipment. “The highest priority was for full laying-barn energy metering of electricity and natural gas,” notes AAF engineer Kelly Lund. “The next highest priority was for an investigation into using modern Heat Recovery Ventilator technology to save on heat energy.” Another main priority was choosing high efficiency equipment in the egg cooler. Electricity consumption is slashed low through the use of LED lights, which initially cost more but reduce light energy use by at least 80 per cent compared to incandescents, and have 30 times the lifespan.

The barn is heated through hydronics, a system wherein heat radiates from warm water circulated through a set of tubes, in this case hung from the ceiling. The water is heated using a natural gas boiler and circulated by electrically-powered pumps. Retaining as much heat as possible is very important to keep energy consumption down, but in a poultry barn, extra insulation won’t really help. That’s because barns lose about 80 per cent of their heat in the winter through ventilation – and that’s why a Heat Recovery Ventilator (HRV) was included in the barn design.

HRV’s maintain air quality while preventing large amounts of heat from being exhausted outside through transferring heat from outbound warm barn air to the incoming cold fresh air. The airstreams pass through an elongated grid system and never mix. The amount of heat that can be retained depends on factors such as air velocity and the temperature difference between the airstreams. Moisture must be removed when the exhaust air temperature is reduced to the dew point. “In freezing weather, there is potential for frost build-up with this condensation,” notes Lund. “Most HRVs (including this one) have a defrost cycle they are able to run if required.”

The HRV system will become operational this fall. Lund says they are anticipating some potential problems in colder weather, “not so much with the heat exchanger itself, but with the method of interior air distribution, which is a free air jet to a central redistribution fan system. If the incoming airspeed is not fast enough (which could potentially happen in particularly cold weather when the incoming airflow rate is reduced to prevent freeze-up), the incoming air may not reach the target location within the barn to be properly circulated.” Brant Colony has looked closely at the situation with EFC and AAF, and also hired an independent engineer. Mandel says everyone has concluded they need to run a distribution duct in order to get a good air flow to the centre of the barn. “We have decided it is better if we wait until the flock gets depopulated in early 2017,” he says. “We will still try to do some initial HRV testing once the heating season starts to see what the air distribution pattern looks like, but are prepared to shut it down if we notice problems.”

When might this particular egg production and cooling facility reach ‘net zero’ energy consumption? Lund says once they have one to two years of data monitoring, they will have “a much better sense of the energy use” and of “the amount of solar panels it would take to make it fully net zero.” She adds that Brant Colony’s decision to go fully net zero will likely be based at some future point in time on “whether the marketplace was ready to reward that level of initiative.”

Mandel notes that overall, being involved in the initiative gave him and his Colony colleagues the impression that the barn really could not be efficient enough, which spurred them to continuously look for efficiencies in all aspects of construction and operation. Besides the HRV system which hasn’t begun operating yet, Mandel says everything else is functioning well. “We can see the energy loads of the equipment in the control system and in the boiler room, and the cooler unit and solar are showing positive signs that the research was a worthwhile cause.”