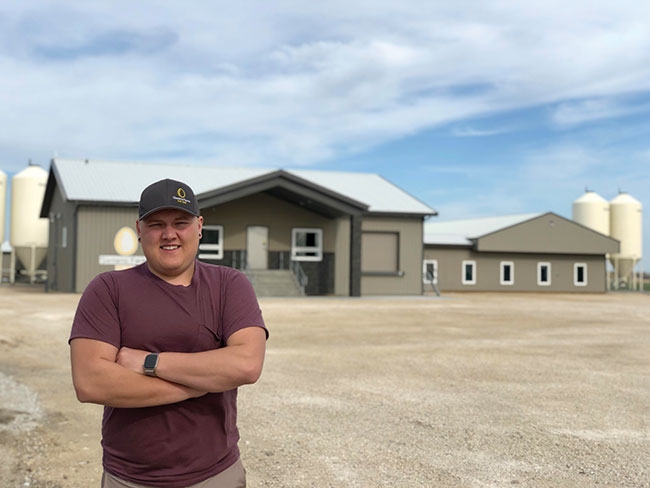 In February of 2016, Egg Farmers of Canada announced their intention to transition from conventional to alternative housing systems. At that time, it is estimated that 90 per cent of Canada’s hens were housed in conventional cages. Today, producers are slowly making the transition to enriched, free-range, free-run and aviary-style housing.

For early adopters, the transition has been particularly challenging, as they’ve had to learn some of the harder lessons through trial and error. The knowledge they’ve gained is valuable to those who, in the very near future, will be faced with their own transition trials and tribulations. Here are their stories.

Siemens has a 16,000-pullet and 28,000-layer operation. Today, all of his birds are housed in a free-run aviary-style system. Previously, though, they were housed either in conventional or enriched cages.

Spurred into action by an aging barn that was first built in 1983, Siemens began the transition mid-summer of 2017. The entire transition was completed by March of 2019.

“If you’re going to build a whole new facility, you can start with a clean slate,” says Siemens, pointing to the difficulties that come with retrofitting an existing barn.

The second contributing factor was market demand. “We talked to our grading station and demand was increasing,” he says. “We wanted to make sure there was opportunity for both my dad and myself, so this is one way to expand our horizons but not purchase quota.”

Before making the transition, Siemens and his father toured farms in Manitoba and Ontario to see which system was the best fit for them. After careful consideration they chose a German system called the Hellmann Pro 11. They were comfortable with the company and understood how the system worked, having worked with Hellmann in the past.

“They have the same type of feed lines, the same controllers for the egg panels and we could also keep some of our leftover parts from motors,” he says. “We have a local seller here, and we have a good relationship with him.”

“Out here in Manitoba, besides us, there’s only one other pullet aviary producer, and that guy, he’s booked up for the next five years and he ships all the way out west,” Siemens says. “If we were to see somebody build a pullet barn or grow aviary pullets for people, I think we’d see an increase. But that’s one really, really big challenge we have right now.”

Final thought: “If you want to be a farmer who wants to go into the barn in the morning, pick your eggs and not have to worry about it, this is definitely not the system for you,” Siemens says. “If you like to have a challenge and you are willing to put some of the time in this is the system for you.”

David Coburn, Keswick Ridge, N.B.
David Coburn and his two sons, Glen and Tyler, have a newly built enriched housing poultry barn in Keswick Ridge, N.B. The barn was built new last year after the decision was made to transition from conventional cages. The new barn houses 34,560 birds, a maximum they are able to fill by leasing quota from other farmers. Coburn has quota for 30,550 layers.

Before deciding which direction to take, Coburn visited the local egg-grading station to ask where market demand was and would be by 2019. While their plan was to build a free-run or aviary barn, the market in Atlantic Canada wasn’t there yet, so they ended up going with furnished cages.

They chose a six-tier Farmer Automatic system with manure belts. There’s a catwalk between the third and fourth levels. Each bird has 750 cm2, which is up from the 432 cm2 provided in conventional cages. Coburn added tunnel ventilation – it can do a complete air exchange in less than a minute – and has LED in-system lighting.

Enriched systems present new and interesting challenges, says Coburn. Currently, he and his sons are re-evaluating nutrition, and they’re working through kinks, like an increased number of downgraded eggs.

“We’re seeing downgrades a little bit higher just because there’s more chance for those eggs to get knocked about and hit things,” he adds. “Your cracks are a little higher than they were in conventional cages.”

They’re learning how to manage that now. Part of the problem, he says, was lighting. When in-system lighting is too dark, for instance, some birds will lay eggs off of the perch areas rather than going into the nest box.

“For me, as a producer, that’s the exciting stuff,” Coburn says. “Running into these new challenges and figuring out a way to work around them. That’s supposed to be what the business is all about.”

Once the new barn was up and running, the Coburns hosted an open house. Some 400 visitors took the opportunity to visit the farm. “We have to educate the general public about these new housing systems,” he says. “It’s fun – it’s a beautiful, beautiful system.”

James Krahn, Abbotsford, B.C.
James Krahn is a third-generation poultry farmer who works alongside his two brothers on the family farm. Together, they manage six poultry farms and a commercial feed mill.

The farms are diversified with broiler, turkey and layer productions, of which three are dedicated to eggs.

The farm has two enriched barns with 46,000 and 53,700 layers, and four free-run barns that were transitioned between 2014 and 2016. Two of the free-run barns have 6,500 birds, one has 8,500 and the other has 7,800 birds. Two conventional barns remain, one of which will begin transitioning to enriched housing beginning September 2019. The other will be decommissioned in a couple of years, Krahn says.

Market demand has played an integral part in determining which system they choose. Currently, the conventional barn holds 33,000 birds. Once the enriched barn is up and running in 2020, it will house 53,700. At one point, all birds were housed in conventional cages.

The first transition out of conventional housing took place in 2014. The Krahns had some older barns that weren’t being used and market demand for specialty eggs had increased. The challenging part for them was deciding what type of system they wanted to use.

“We knew we wanted to be in the free-run category, but we just didn’t know what type of system would be most feasible for our existing structure,” Krahn explains.

Looking back, Krahn realizes that an aviary system would have better utilized the barn space they had.

“Now that there is so much more experience with aviary systems, and the system utilizes barn space so much more efficiently, I don’t think there are a whole lot of producers now who would install a single-tier system,” he says. “The management practices and understanding of how to operate aviary production has come so far in the last few years.”

Final thought: “All systems have their strengths and qualities, for sure,” says Krahn. “I think free-run is great. The behaviour of the birds – they all kind of have their own personalities. It’s a lot of fun working with free-run production, but it’s also challenging. Some of those challenges are rewarding once you can work through them.”

“In conventional, behaviour is not as crucial, so you’re working more with the mechanics and flocks are a little more rhythmic. In free-run, there are always some surprises that pop up. Enriched systems have some similar qualities to conventional. In enriched, though, the bird behaviour is more similar to free-run, but it is easier to manage.”