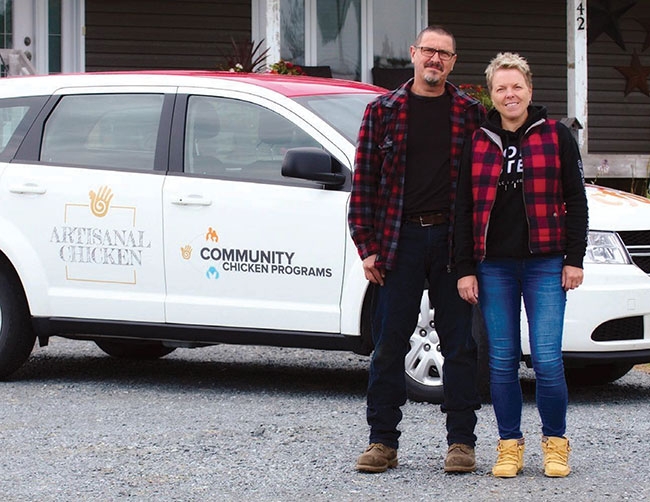 Traffic is very busy on their paved road; their farm is surrounded by several large communities. For them, the traffic means customers for their farm market, whether they are commuters picking up food on their way home from work or those who come in every month or two to stock up from up to two to three hours away.

Ginette considers their farming operation as “unique and blessed”, being situated in the center of such a large urban area, “practically at everyone’s doorstep.”

Diversification has been very important, allowing them to provide a wide range of products to their customers at their on-farm store. Through the Artisanal Chicken Program, administered by Chicken Farmers of Ontario (CFO), poultry has become part of their farm diversification over the past four years, allowing them to service their growing and loyal local market.

“People everywhere, our customers and our community, have made it clear they want naturally and ethically raised meats to be part of their lives,” Ginette says. “We’ve listened and chose to farm in that manner.”

Family farm
Ginette and Pete have been farming now for 10 years. Pete grew up on a hobby farm in the area and Ginette was involved with horses since her teens and has owned horses most of her life.

Triple Star Acres Farm is a family operation: their daughter, Sylvie, works on the farm between studies in agriculture at the University of Guelph, Ridgetown Campus. Both of their parents work at the farm, as well as Pete’s sister. “It’s definitely thanks to family we are able to grow and be successful,” Ginette says.

The farm itself is 80 acres of land in total, of which they farm approximately 20 acres. They raise chickens, turkeys, and pigs, all raised on pasture and free-range.

For their beef, they began partnerships with farmers from Manitoulin Island four years ago and they grow vegetables and garlic in their 10-acre garden.

Triple Star Acres started with the Artisanal Chicken Program when they realized that the demand for farm fresh chicken was huge. “We were raising 300 chickens per year prior to that and realized the demand was growing and we also wanted to grow, so the opportunity was there,” Ginette says. They were listening to their customer’s demands for naturally raised, non-GMO, antibiotic free products, factors that were very important to their customers.

Personally, they’ve also come to realize that in the past ten years ‘eating healthy’ has become vital to their own health. Under the Artisanal Chicken Program up to 60 birds may be grown for self-consumption; Ginette has battled Crohn’s Disease since 2002 and eating their own healthy food has meant that she has had no signs of Crohn’s in the past six years. “Our farm has changed my life drastically,” Ginette says.

Developing markets
Their main method of marketing is definitely their farm store, strongly supported by their Facebook page and website. “We are known for raising quality animals and summer produce and have become a staple in our city,” Ginette says.

So far everything has definitely been working as planned. Their business has been growing year after year and their customer base is growing each year. They have now established themselves with a few local restaurants with their meats as well, which Ginette describes as “amazing!”

The only slight challenge so far has been price. Non-GMO feed is more expensive and this is reflected in the price of their products but their customers have adjusted and are willing to pay for quality without hesitation.

Unfortunately, they don’t allow visitors on the farm for biosecurity reasons but their customers completely understand and “love our practices and passion,” Ginette says. Compliance under the CFO Artisanal Chicken Program also adds to the credibility of production.

What continues to drive diversification is demand, she explains, and so far, their customer feedback has always been positive.

“We definitely want to grow,” Ginette says, “since our daughter is attending school for agriculture. Our goal is to reach the maximum capacity of 3,000 birds; we should be there shortly.”

A growing market
Patricia Shanahan, director of community programs at the CFO, places Triple Star Acres at slightly smaller than the average producer enrolled in the CFO Artisanal Chicken Program. “Where they excel is in building their market,” Shanahan says, using social media to help drive loyal customers to their on-farm store.

Under the program, farmers are allowed to raise 600 to 3,000 birds without quota, paying an annual levy and complying with national On-Farm Food Safety and the Animal Care Program. Prior to enrolment, premises are visited and afterwards, regularly audited.

In 2019, the Artisanal Chicken Program’s fourth growing season, there were 144 conditionally approved applicants intending to raise an average of 1,538 birds per farmer. Regionally, using OMAFRA location designations, 75 of those farmers are in Western Ontario, 30 in the East, 22 in the North and 17 are Central.

“There are as many ways to raise birds as there are farms,” Shanahan explains. “Everyone does it a little differently.” One farm even employs a guard Llama to protect the flock.

Each applicant will be interviewed, which she says is more like a “dual interview” since the farmer also gets to ask questions about CFO and the program. The CFO farm representative will discuss topics such as markets, transportation, and production practices, and share ideas about how other farmers are raising their birds, giving advice to new entrants before they decide to invest such as raising different species of birds separately.

Once you are accepted into the program you will pay a levy per bird and will undergo regular audits to ensure compliance. Participation is renewed each year and Shanahan said there is still lots of room for new entrants.

“The Artisanal Chicken Program has opened up a lot of smaller markets,” Shanahan says, catering to different consumer groups through farm gate sales, farmers markets, and restaurants. “It’s good for the industry.”