Research looks at the effects of temperature and humidity during transport on turkey meat quality. 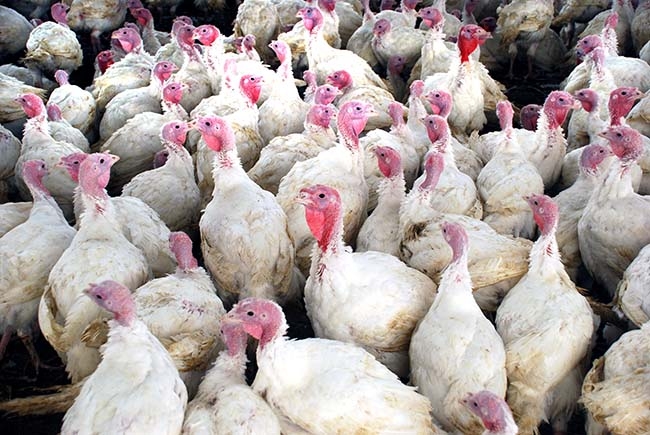 Trever Crowe at the University of Saskatchewan is studying the response of turkey hen and tom physiology, behaviour and meat quality to different temperatures and humidity levels during simulated transport.

Do turkeys respond the same way as broilers to transportation? That’s the question professional engineer Trever Crowe has been investigating at the University of Saskatchewan (UofS).

“Animal welfare is the greatest impetus for our work,” Crowe told the audience at the Poultry Industry Council 2016 Research Day in Guelph, Ont., with his work focusing on the transportation of turkeys to market. The turkey industry is facing increased demands from regulatory agencies and consumers but current broiler data may not be directly applicable to turkeys.”

Travelling Turkeys
Crowe’s objective was to investigate the response of turkey hen and tom physiology, behaviour and meat quality to different temperatures and humidity levels during simulated transport.

Crowe, the associate dean in the College of Graduate Studies and Research at the UofS and a faculty member in the department of mechanical engineering, was the principal investigator, along with his research assistant, Catherine Vermette, graduate student Zoe Henrikson, and a platoon of other casual workers helping to collect
the data.

Environmental simulation
Researchers mimicked a typical farm-rearing environment at a barn on campus with 120 12-week old turkey hens and 120 16-week old turkey toms, growing them for a week with ad lib feed and water under 16 hours of light. After reaching market age the birds were crated and exposed to simulated transportation conditions where they were randomly assigned to one of five treatments: two warm treatments at 28 C with 30 and 80 per cent relative humidity, two moderate treatments at 20 C with 30 and 80 per cent relative humidity, and one cold treatment at -18 C, all at a stocking density of approximately 83 kg/m2. Crated birds were placed inside a pre-conditioned environmental chamber for eight hours under these experimental conditions before being processed at a mini slaughter plant set up at the university’s College of Engineering.

Experimental measures included live shrink; core body temperature; behavioural observations during exposure such as sitting, standing, huddling, shivering, panting, pecking, ptiloerection and preening; blood glucose levels before and after exposure; heterophil/lymphocyte ratio and the meat quality – the pH and colour of the breast and thigh.

Hypothesis
In terms of meat quality, Crowe hypothesized that warm exposure would result in pale, soft, exudative (PSE) meat, demonstrating a decline in pH and subsequent water holding capacity that results in tougher, paler meat. He also expected that cold exposure would result in dark, firm, dry (DFD) meat, due to an increase in muscle pH. There was the potential that meat exposed to cold would provide a larger yield, reduced drip and cook loss, with improved texture and taste scores.

Results
The results indicate that toms tolerate the cold better than hens but hens did better in the warmer conditions.

For cold transport at -18 C, hen live shrink was greater, core body temperature tended to be lower, thermo-regulatory behaviours such as huddling, shivering, ptiloerection increased, both breast and thigh pH tended to increase and became darker when compared to both treatments at 20 C. Under the same cold conditions the blood glucose of toms had a tendency to decrease, thermo-regulatory behaviours increased and thigh pH increased.

Comparing warm transport conditions, the opposite was true. Crowe found overall, that hens were less susceptible to the effects of warm transport than toms. Comparing both 28 C treatments to 20 C treatments at 30 and 80 per cent relative humidity, hen live shrink was greater and thermo-regulatory behaviours such as panting increased at 28 C. For toms live shrink increased, core body temperature increased, thermo-regulatory behaviours increased and breast pH increased under 28 C treatment compared to 20 C.

Research conditions
Crowe suggested that the exposure conditions were not extreme enough to cause consistent and widespread physiological changes but that changes in core body temperature indicate birds were possibly beginning to reach the limit of their thermal coping abilities. Crowe pointed out that the research was conducted under ideal conditions, with all birds healthy and dry.

Turkey physiology and behaviour were affected to a greater degree than meat quality measures; meat quality was not compromised and defects did not occur in cold or warm transported hens or toms.

Crowe suggested that the large size of turkeys relative to broilers and size differences between hens and toms likely account for some of the variation in results and make it difficult to extrapolate work done with broilers to turkeys. As he says, turkeys are not just big chickens.

Funding Partners
This work with turkeys was one of the Growing Forward II projects sponsored by Turkey Farmers of Canada and Agriculture Canada.  Crowe is now looking ahead to do similar work with end-of-cycle hens in a collaborative project with Karen Schwean-Lardner and he has also explored the possibility of similar work with broilers.  There are no immediate plans to extend this work on turkeys, although there are other turkey-related projects ongoing at the UofS.