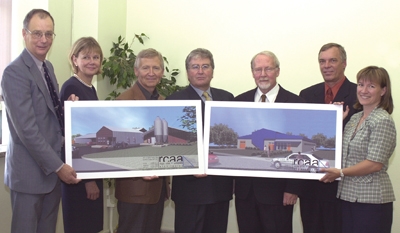 The two largest Montreal universities: de Montréal (UdeM) and McGill, combine their resources and agricultural departments in initiating a Montreal Poultry Research Centre, and they are also getting together to launch a fund-raising drive to collect the additional capital needed to materialize their project. That was the object of a public presentation held at the St-Hyacinthe campus of the UdeM’s Faculty of Veterinary Medicine, on September 21, 2001.

The joint project is estimated to cost 6.72 million dollars and the planning stages were completed through the hard work and energy deployed by UdeM’s Faculty of Veterinary Medicine and by McGill U’s Faculty of Agricultural and Environmental Sciences.

The Canadian Fund for Innovation, with the cooperation of Quebec’s Ministry of Education, has already announced a 4.22 million-dollar grant, which will serve to subsidize the facilities and sites exclusively dedicated to research activities. The rest of the money will have to be raised from private funds and the universities. The silent fund raising efforts already under way since last spring have produced one million dollars.

One of the two joint fund raising drive presidents, Jean-Pierre Léger, chairman and head of Rôtisseries St-Hubert, spoke on behalf of the Faculty of Veterinary Medicine and made public his company’s commitment. The Quebec Federation of consumer egg producers, Michel Gauvin, recalled how united the poultry industry was over sponsoring the Aviary Research Chair some three years ago, and he then announced his segment’s commitment.

The other cochairman of the fund raising drive -AT&T Canada’s Board Chairman and legal advisor with Osler, Hoskin and Harcourt- manifested his faith in the importance of creating a Centre whose innovative research will produce disease resistant birds, less dependent on antigens, thus improving the product in terms of both quality and healthiness.

The Centre will consist of a two complementary units research complex. The first unit will be on McGill’s MacDonald campus at Sainte-Anne-de-Bellevue, end the other at UdeM’s Faculty of Veterinary Medicine campus at St-Hyacinthe.

The complex’s importance leaves no doubt as it “will reassure the consumer by making available a top quality product nutritionally and contributing to better public health by reducing food toxicity in poultry.”

The initiators of the Montreal poultry Research Centre need 1.5 million dollars to realize their project.

The two units will work as a team

The MacDonald campus unit will develop and maintain lines of birds bred for their resistance to disease based upon the production of antibodies in response to non pathogenic antigens, large scale evaluation of DNA selection, development of probiotic based treatment, on the reproduction of specific traits and the production of quality products.

The other unit, at the UdeM Faculty of Veterinary Medicine, will consist of a vivarium for the housing of birds, to be used in the study of pathogens responsible for food toxic infections, poultry infectious diseases and the efficiency of some genetic lineage, or of preventive and curative treatments against the multiplication of these microorganisms.

The Centre will be managed jointly by the two universities. Dr. Roger Buckland of McGill will be the first manager and will be assisted in his duties by two associate directors: Drs. Urs Kuhnlein of McGill and Martine Boulianne of UdeM.

The creation of this Centre will be beneficial in several ways:

A) The two faculties will have access to the last word in technology, which will facilitate research and a multi-disciplinary approach.

B) the two universities will come together to ensure a better positioning as leaders in the field.

C) The industry will have a strong ally in the reassuring of consumers.

D) The donor society will