U of G’s ‘Chicken Whisperer’ to receive lifetime achievement award 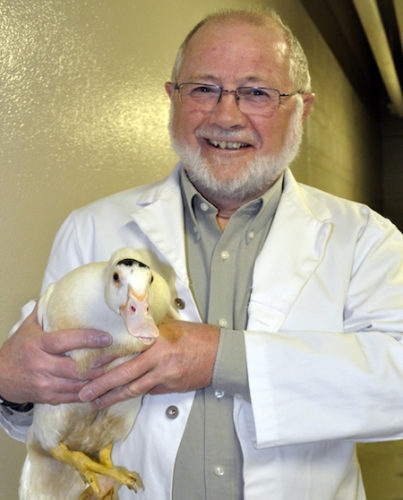 Dubbed the “chicken whisperer,” University of Guelph animal biosciences professor emeritus Ian Duncan has been named the recipient of the 2019 Frederic A. McGrand Lifetime Achievement Award from Humane Canada.

Humane Canada brings together SPCAs and humane societies from across the country.

“We are pleased to announce Dr. Duncan as the winner of this prestigious recognition for his long-time commitment to finding solutions to improve farm animal welfare.”

A member of the former Department of Animal and Poultry Science for 21 years, Duncan was among the first researchers to develop a scientific approach to solving animal welfare problems. His work based on “asking” animals what matters to them has led to the development of similar techniques for other species.

“Receiving this award is both a personal and professional achievement,” said Duncan, former director of the Colonel K.L. Campbell Centre for the Study of Animal Welfare at U of G. “My research on the suffering experienced by egg-laying hens in battery cages helped to push for more humane husbandry systems.”

He will receive the award this weekend during Humane Canada’s sixth annual National Animal Welfare Conference in Montreal.

In 2017, Duncan received the organization’s Leadership in Farm Animal Welfare Award for his work on the National Farm Animal Care Council’s code committee for layer hens.