Under the Green Stetson 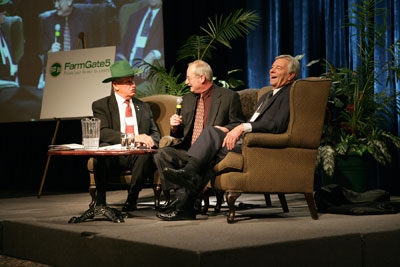 Unless I’m distracted, when I step on an “up” escalator, I think about The Honourable Eugene Whelan. If I do, you can bet that a wry smile crosses my face.

As editor of a magazine focused on an industry that operates under supply management, it would be shameful not to acknowledge that Mr. Whelan, the father of our very marketing system passed last month.  But, as a writer, how does one pen an original column that the audience hasn’t read or heard a hundred times before in the many tributes that have been used as introductions, the biographical profiles that have been printed in agricultural journals, and the countless interviews Mr. Whelan himself gave during his lifetime?

How do you do that if you weren’t even born when Mr. Whelan was fighting on behalf of producers and you didn’t really “know” him?

Ah, but I did encounter him. Twice. And I felt and saw first-hand the effect he had on people.

A student at the University of Guelph, I met him initially in Leamington on a tour of a canning plant. I’d heard so much about him that his Stetson might well be a halo. What could I have said to him that he didn’t already know? Not much.
I went with unoriginal.  “Hello, Sir.  It’s an honour to meet you.”

That went well, I thought, afterwards.

Years later, in March of 2005, at the Chicken Farmers of Ontario (CFO) Annual General Meeting, it was announced that former federal Agriculture Ministers, Mr. Whelan and his former colleague, The Honourable John Wise, had agreed to serve as Honourary Co-Chairs of FarmGate5 in support of Ontario’s dairy and poultry farmers.*

My job, as an employee of CFO, was to make sure that Mr. Whelan was in the ballroom after lunch, so that when he was introduced, he was waiting in the wings.

Anyone who has been to a convention at the DoubleTree hotel near Toronto airport, knows the layout.  The main conference Plaza ballrooms are separated from the guest room block by a long, narrow breezeway.  It’s only about 300 feet long, but it is a good haul when you’re in a rush.

Mr. Whelan was in a dining room at the opposite end of that breezeway and I had just less than seven minutes to track him and get him to where we needed him. So, I ran.

Finding him wasn’t the issue.  The green Stetson was easy to locate. The problem was, a sea of faces surrounded it, and all of them were alight with smiles and laughter. Mr. Whelan was in the middle of what looked to be a good story.

That was definitely not helpful.

I stood watching for a few seconds and then thought “I have to,” so I barged up to everyone and broke up the revelry.
“Excuse me, Mr. Whelan, Sir. I need you to come with me.”

That look…oh yes.  The look you give when someone has just done something so nervy that they don’t even realize how nervy it was.

I wasn’t quite sure which way this was going to go.

But then, quite companionably, he looped his arm through mine and told me to lead the way. Like I said … easy.

But, did I really know who I had on my arm? Did I realize at the time that Mr. Whelan had served as the Liberal MP for Essex-Windsor in southwestern Ontario from 1962 until 1984? Yes, I knew that. Or that he served as Agriculture Minister under then-Prime Minister Pierre Trudeau from 1972 through 1984, except for nine months in 1979-80 when the Conservatives took office? Sure I did.

Did I know he was so popular? Nope!

Trying to get Mr. Whelan to that room three furlongs away was akin to getting water back into a faucet.  No sooner had he told me to lead the way, than a producer delegate stopped him, wanting to shake his hand and chat for a while.  I fended that person off, only to get another few feet before yet another glad-hander stopped us again.

And so it went. In the space of that cursed mile of carpet, I would bet that Mr. Whelan was stopped at least twenty times.  Frankly, I had never seen anything like it with any politician and probably won’t again.

At one point in the segmented journey, still arm-in-arm, he looked down at me and said, “Are you going to be in trouble?”

I replied “No, Sir.  But at this moment in time, it is highly inconvenient that you are so popular.” And he chuckled.

The only thing left now was to navigate the small escalator that would take us up one floor to the plaza foyer.

The escalator at the hotel is narrow, single-file only, and it only goes one way – up or down.  It was moving up so I chose to use it and stood aside to let Mr. Whelan on.

“No, ladies first,” he insisted.

So I stepped on, a few feet behind someone. And then I turned around to talk to him – but there was just a great fat clump of air where he should have been standing, on the stair below me.  Instead, he was still at the bottom, talking to another delegate who wanted a few moments with him.  The escalator carried me upwards and away from him and I watched helplessly as he fell into easy conversation with this new devotee.

In blind panic I started trying to step back down the escalator until someone stepped on and blocked my way. I gave up then, and resignedly let the thing take me to the top. I had to laugh. What else was there to do?

The minute I stepped off that escalator, though, I ran around to the stairs, down the zigzags (what was wrong with a simple straight staircase anyway and who designed them?) and finally, caught up with Mr. Whelan, still engrossed in spirited conversation with a congregation who, at that precise moment, were Public Enemy #1 through #9, as far as I was concerned. Reunited, we set off again, only to be confronted again by more fans at the top of the escalator. Alas, by this time, we were close enough that more escorts materialized to help me and eventually, Mr. Whelan did make it into the room…fashionably late.

But as I surrendered him to higher-ranked handlers, I stopped in the doorway and thought about what had just happened.  Even as he was led to the stage, people in the room were stopping him to shake his hand, slap him on the back and have their one-minute audience. I was astounded. How does a politician get to be that popular? In agriculture?

The fact is, The Honourable Eugene Whelan was a farmer’s advocate – and farmers knew it. His reputation preceded him, and time spent with him was a privilege.

As a rookie, on that day in March of 2005, I realized a lot about the man under that legendary green hat and just how much farmers appreciated his efforts.  His legacy lives on in the form of supply management, but the personal memories he left with people will also be treasured.

What an extraordinary man. How fortunate I am to have been able to take a leisurely afternoon stroll with him.
*For more on this, see The Back Page, by Roy Maxwell.