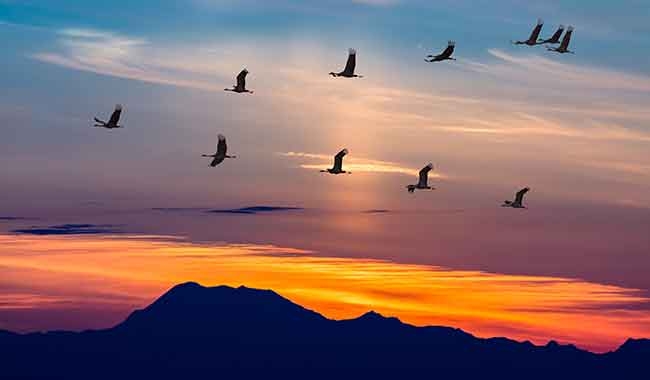 It’s known that wild birds are vectors for AI, but the pattern of spread does not match migratory routes Photo: Fotolia

Avian influenza (AI) is without a doubt one of the biggest concerns for the global poultry industry. New outbreaks occur in most regions of the world every year, and according to Arjan Stegeman of Utrecht University in The Netherlands, it’s a problem that is only going to get worse. Stegeman was a keynote speaker at the International Egg Commission’s Global Leadership Conference in Berlin last September. His talk, Understanding AI, opened what would be an interesting week.

The unpredictability of AI
Commonly called the bird flu, AI is an infectious viral disease that occurs in birds, particularly in wild waterfowl, such as geese and ducks. AI viruses can be sub-divided into two groups, high pathogenic and low pathogenic AI. This division is based on their ability to cause disease in poultry. Low pathogenic viruses can cause mild symptoms, like gut trouble, whereas high pathogenic viruses result in high mortality rates, sometimes up to 100 per cent in just 48 hours.

High pathogenic viruses, however, can arise from low pathogenic types. “Sometimes we know that this happens quite quickly, so on the same farm where the virus was introduced,” said Stegeman. “And other times it can take more than half a year, like we’ve seen in Italy. That is something that we would like to understand better.”

Another peculiar feature of this virus is that it can easily exchange genetic material. “If a duck gets infected by the H5N1 virus, and at the same time an N8 virus, a new virus can arise from that,” Stegeman explained. That virus would be referred to as H5N8.

“This happened, for example, with the H5N2 virus that has arisen in the United States,” Stegeman continued. “So this virus has all kinds of tricky features that can make it survive in the population and change its nature in a way that is very difficult to catch.”

In the past 10 to 15 years, there have been a number of interesting occurrences in highly pathogenic AI. For one, the scientific literature before 2003 showed that epidemics of new sub-types (H5N1 or H7N7) always arose from the introduction of a new low-path virus, which then mutated to a high path virus. This still happens today, only now, wild birds have entered the equation. The hypothesis, Stegeman explained, is that the H5N1 epidemic was not effectively controlled in some countries, and spillover of the virus to wild birds occurred. In fact, experts agree that H5N1 was the first high pathogenic AI to be widely spread through the movement of wild birds. Today, it is possible for several wild bird species to be high pathogenic H5 infected without showing any signs at all.

Global spread of H5N8 explained
The global spread of the H5N8 virus began in China and South Korea. Later, it spread to Europe. As of November 2014, the virus had spread further to Canada and the United States. Interestingly, though, the pattern of spread does not match the migratory routes of wild birds, Stegeman said.

The virus, he explained, spread first from China and South Korea to Siberia. There, birds from Western Europe and Asia mixed and the resulting viruses were brought to Europe in the spring. A similar thing happened in North America.

There are tools available to evaluate the genetic differences between viruses, and results have shown that many only differ by one genetic position. “For the rest, this is not what we see,” said Stegeman. “What we see is something that is really very scattered with really huge differences between these viruses. What this means is that we’re dealing with separate introductions, and not between-farm transmission. The most likely cause of that is the wild bird population.”

Differences between the U.S. and Europe
In April of 2015, what has since been described as the worst animal disease outbreak in the history of the U.S. began. On April 12, the first birds tested positive for high pathogenic AI on a 200,000-bird cage-free operation in Wisconsin. On April 20, a five million bird operation in Iowa was hit.

“From April 20 until the middle of June, it was absolutely crazy,” Chad Gregory of United Egg Producers in the U.S., told the crowd in Berlin. “Every single day, seven days a week, 24 hours a day it was quite the experience – Wisconsin, Iowa, South Dakota, Nebraska and Minnesota.”

Ultimately, the outbreak ended up wiping out some 35 million egg-laying hens, and another five to six million pullets.

“Those 35 million egg-laying hens represented about 12 per cent of the entire U.S. flock,” Gregory said. “And unfortunately 30 million of the 35 million we lost were dedicated to the egg product market.”

“We didn’t know what to do in the beginning,” Gregory said. “We felt like there was just so much chaos going on in those first couple of days.”

But what made the U.S. situation so much different than the European cases? Dr. Klaus-Peter Behr of AniCon in Germany explained.

The H5N8 virus that hit both Europe and North America originated in Southeast Asia. This virus found its way with migrating birds via Russia to Europe and via Alaska and Canada to several U.S. states. “On its way to the U.S. it mingled up with an H9N2 virus and became the H5N2 virus hitting the U.S. poultry industry,” Behr said.

The U.S. virus experienced a severe delay or incubation period, whereas the original H5N8 needed only two days from infection before severe mortality began. In the U.S., mortality didn’t begin for eight to 10 days.

“This difference gave the U.S. virus a whole additional week to intensively multiply and spread without being obviously present, as shown by increased mortality,” Behr said.

In Europe, poultry producers had a tremendous advantage, since the virus became obvious very quickly after introduction on the farm. “This was the crucial difference that made it possible to stop spreading of the virus one week earlier than in the U.S. cases,” Behr concluded.

AI isn’t going anywhere
Most experts agree; AI isn’t going anywhere. That’s not to say, though, that producers are helpless. “I think, as many of you realize, we may have to live with bird flu for quite a while,” Stegeman said at the end of his presentation. “That does not mean that we cannot do anything because introductions for known pathogenic virus will remain. But it does leave us wondering what will happen with future outbreaks with the highly pathogenic virus, especially given that all the migratory birds are now coming back.”