Features Research Welfare
Understanding the Animals in Your Life 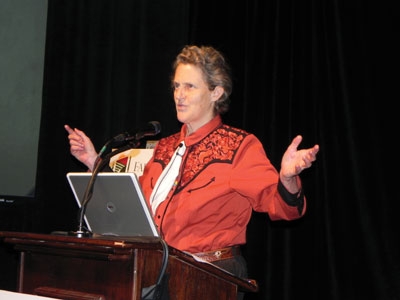 Dr. Temple Grandin said that farmers should be more observant of the animals in their farms.

“If you work with people who actually work with animals, you can, in turn, really improve animal welfare. The second part of that is if you improve the facilities that the animals are moved through and handled in, you’ll again improve those animals’ lives. And if you take those two as a powerful combination – working with the people and the facilities – and add that up, it leads to exponential improvements in animal welfare.”

That was how Crystal MacKay, executive director of Farm & Food Care, introduced Dr. Temple Grandin – the woman who needs no introduction –when Grandin presented Understanding the Animals in Your Life at the Living Arts Centre in Mississauga in June. Grandin is renowned throughout the world for her development of humane livestock-handling systems and had two important take-home messages for attendees: be more observant and, whenever possible, teach the general public about what you do.

On being more observant
Animals notice little things that we tend not to such as a beam of light, a coat on a fence or a shiny reflection,” said Grandin. “And sometimes you just need to make a little change in lighting and the problem is solved because animal thinking is sensory-based and very specific.”

Although animals are not the same as humans, they do have emotions and do get stressed, she said. The core systems that drive their behaviours are fear, rage, panic and seeking.

“They’re not afraid of getting slaughtered,” said Grandin. “They’re afraid of things like sudden movement, darkness or loud sounds.”

“And then you have another emotion, which is separation distress,” she said. “The neuroscientists call it ‘panic,’ but I really don’t like this term because it gets confused with fear – they’re two separate brain systems.”

Dr. Grandin is autistic and, therefore, a visual thinker, like animals, which gives her a unique perspective and insight when it comes to understanding animal behaviour. “Animal thinking is very specific,” she said, “because it’s sensory-based, not word-based. I want to try and get you away from thinking through language.”

When animals are forced to do things, they experience “fear stress.” However, if you do not force them and allow them to go voluntarily, that emotion is never experienced. In essence, you want to make sure that their first experience is a good one, she said, because if it isn’t, then they will always associate that action or thing with fear. Because animals are thinking-specific, they get fear memories and the problem with those memories is that you can never totally erase them, said Grandin.

For example, there was a horse that had a frightening experience at a vet clinic. At the time of the incident, the man who had caused the fear was wearing a black hat. After that incident, the horse was afraid of all black hats because it associated the hat with the memory of the fear experience.

With this understanding, Grandin recommends that farmers properly prepare their animals before they go to slaughter by getting them accustomed to people walking through the barn.

“I think it’s extremely important for people to walk through their finishing barn, and get the animals accustomed to people walking through them, because pigs differentiate between a man in the pen and a man in the alley,” she said. “You see; if the first time the pig’s experiencing a man in the pen is the day it’s shipped out to the slaughter plant, they’re going to go berserk. You need to get pigs used to having people walk through.”

The same concept, she said, applies to poultry. “Where you’re going to have trouble, and where it doesn’t work great, is if that farmer hasn’t walked that barn,” she warns. “…Turkeys go berserk. And I’ve seen that with chickens too. Before you get there, as a custom crew catching those turkeys, that farmer needs to have walked through that barn – not the day before – so they don’t freak out.”

On educating the public
Educating the public could solve a lot of the problems in agriculture, Grandin said. “People don’t know the most basic things,” she said. “There are school kids that think that eggs grow in the ground like potatoes.”

Grandin suggests that growers and producers share knowledge through YouTube videos. “When you type ‘cattle rancher’ or ‘feedlot’ in YouTube, you get a lot of pictures of people doing just normal stuff like feed trucks dishing up some grain, or loaders scooping up some feed,” she said. “That may be chores to you, but to a lot of people in non-agricultural fields, a loader scooping up feed is interesting.”

For those who raise poultry, and as a good example of what can be done with cameras, Grandin suggests looking at J.S. West’s chicken cam – a live chicken camera in an enriched cage system.

On chickens
“I’ve seen some furnished caged systems – or enriched cage systems – that give a hen some of the things that she actually wants, like a private nest box,” said Grandin.

“There are certain things that a hen wants,” she explains. “She wants a private place to lay her eggs, because when chickens lived out in the wild if she laid her eggs in the clearing, then a fox ate them. If she hid in the bushes, then the fox didn’t eat them. So you have an instinctual behaviour motivated by fear to hide. That’s why they need a private nest box.

“They also want perches and a place to scratch and then full height, so they can walk their little walk,” she continues. “And express their chicken-ness.”