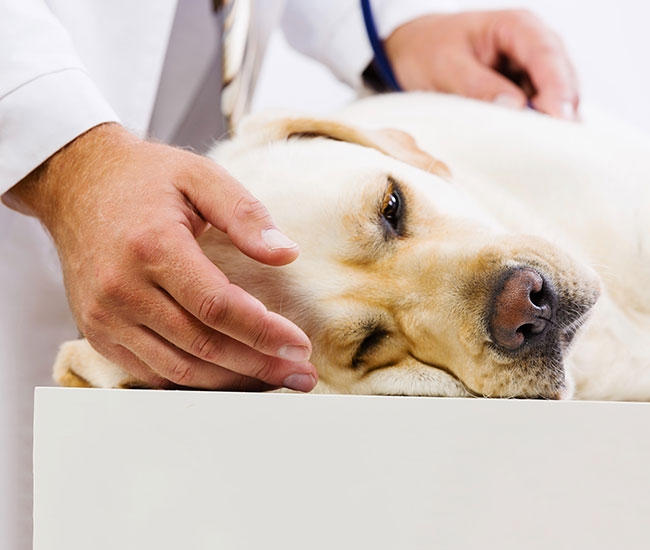 Some producers have wondered if the recent outbreak of canine influenza in Ontario poses a threat to poultry. Experts say that while the strain is of avian origin the risk is very low. Photo: Fotolia

The H3N2 canine influenza virus was detected in dogs in Ontario this past December. Some producers might be wondering if the outbreak poses a threat to poultry. While the strain is of avian origin, experts Canadian Poultry consulted say the chances of it being transmitted to poultry now that it has switched to a canine-adapted virus are small. Thus, they consider any related disease threat to the poultry industry in Canada to be very low.

That said, the situation remains a good reminder that poultry biosecurity risks can present themselves at any time and potentially from unexpected sources.

The story began in late December 2017, when two dogs had been flown in from Asia for pet adoption by an Essex County resident. The animals began to show signs of respiratory disease. The cause was determined to be H3N2 influenza, the first known detection of the virus in Canada.

It is one of two canine influenza strains, the other being H3N8. According to the American Veterinary Medicine Association (AVMA), influenza in canines (the H3N8 strain) was detected for the first time worldwide in 2004 among greyhounds at a racetrack in Florida. The viral strain is closely related to and believed to be a mutation of the strain that causes influenza in horses. Later in 2004 and the year after, outbreaks occurred in dogs across many states. The disease has currently been reported in 40 states.

In 2015, the H3N2 strain of canine influenza, which was first detected in 2007 in South Korea, was found in the U.S. for the first time. Now, according to the AVMA, “thousands of dogs have been confirmed positive for H3N2 canine influenza across the U.S.”

This strain of influenza is highly transmissible between dogs, particularly in areas such as Canada where dogs do not have natural immunity from previous infection and where canine influenza vaccination is rare, explains Dr. J. Scott Weese, a professor at the Ontario Veterinary College, University of Guelph, chief of infection control at the Ontario Veterinary College Teaching Hospital and the Canada Research Chair in zoonotic diseases. Weese says most dogs that develop influenza do not get seriously ill, and that the recent H3N2 infection cluster in Ontario is hopefully still contained.

Some producers have wondered if the recent outbreak of canine influenza in Ontario poses a threat to poultry. Experts say that while the strain is of avian origin the risk is very low.

Virus strains and risks
H3N2 is an ‘A’ strain of influenza. These strains can infect a range of birds and mammals, including humans, pigs, whales, horses and seals. The ‘H’ in the classification refers to the type of hemagglutinin present (a surface glycoprotein involved with binding the virus to host cells) and the ‘N’ to the type of neuraminidase the virus has (a surface enzyme involved when the virus releases from host cells).

“The highly-pathogenic types of this virus are H5 and H7, which are reportable to Canadian Food Inspection Agency,” notes Dr. Grant Maxie, co-executive director of the Laboratory Services Division and director of the Animal Health Laboratory at the University of Guelph.

The concern with any influenza virus, explains Maxie, is that different variants of the virus present within a host (particularly pigs) and can exchange bits of DNA (called re-assorting).

“Similarly, with the canine infection, should the dogs come into contact with another flu virus, the combination might re-assort and become more pathogenic, but this is highly unlikely,” he says. “Also, similarly, the H3N2 in dogs is of little concern to poultry in Canada, primarily because the dogs, and we assume their owners, have no contact with poultry.”

Weese echoes the sentiment. “Overall, the risk here to poultry is negligible for a few reasons, including lack of evidence that this strain is avian-adapted anymore – while it has an avian origin, it’s now a canine type – the rarity of it in Canada in dogs and the hopefully low incidence of direct contact between dogs and poultry.”

For the study, birds were inoculated with infectious doses of the virus. The researchers then observed the birds for any clinical signs or gross lesions. They saw neither. Thus, they concluded that chickens, turkeys and Pekin ducks were not susceptible to infection.

Whichever influenza viruses or other disease agents are or are not present in Canada at this point, Maxie stresses that strict biosecurity is important for poultry operations at all times. He reminds us that on a farm, “exclusion of air-borne viruses such as influenza is even more onerous than exclusion of pathogens that are carried on fomites – vehicles, equipment, personnel, clothing.”