Proven effectiveness at a much lower energy cost. 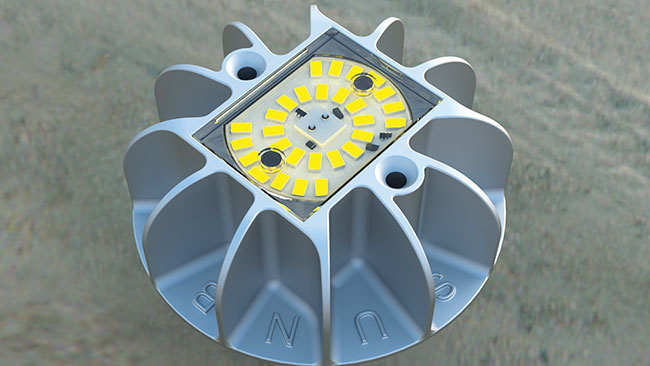 LEDs produce heat and, therefore, the design and size of the heat sink in relation to the power unit is important especially during hot weather. PHOTO CREDIT: Philip Malherbe, Sunbird Lighting

Chickens can receive light through the eyes but also through the skull to stimulate the hypothalamus and pineal glands. Red light can penetrate the skull to stimulate sexual development better than blue light, which is at the opposite part of the light spectrum. This is the main reason why warm light, which favors the red end of the spectrum, is preferred in the egg production period.

Over the last few years, LED light has proven to work as well as the traditional light sources to bring parent stock into production with the advantage of a much lower energy cost. Compared to incandescent lights, high-pressure sodium lights can reduce energy costs by 40 per cent over a five-year period. However, compact fluorescent and LED lights can reduce costs by 63 per cent and 73 per cent over a five-year period, respectively.

Currently, new light installations are primarily LED lamps/tubes or strings due to the low energy consumption compared with other lamps, the long life span (> 50,000 hrs), dimming ability, and adjustable colour output. They are also easy to wash, clean, and disinfect, and have a high Ingress Protection value (IP; related to the level of dust and humidity penetration). The general recommendation in rearing and production is 2,700K (warm light) with a dimming system. Warm light tends to prevent floor eggs relative to cold light (6,000K).

LED lights have had a considerable impact on breeder management. The introduction of dimmer units (dusk to dawn) have made it possible to work with low light intensity outputs of 1.5 to 2 Lux but still see well enough to manage the birds. Some farm managers prefer non-dimmable LED lamps. In these cases, management is concerned some staff members may change the settings, which may dramatically affect the light susceptibility (refractory) of the birds toward the end of the rearing period. Therefore, on farms with dimmable LED units, it is very important that the dimmers are not adjusted without specific authorization from the livestock manager.

Dimming ability is important in rearing to keep the birds calm. Furthermore, running lights at a lower intensity has a big impact on energy consumption. Installing a dimming system will also have a major impact on the LED’s life span, especially during the production period. LEDs also produce heat, and the cooler they run the longer they will last. 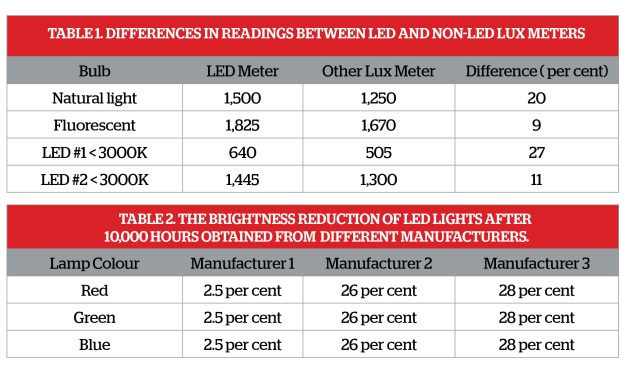 The design and size of the heat sink in relation to the power unit is important, especially during hot weather (Figure 1). However, if lamps are dimmed to 70 per cent of total capacity, there is very low heat emission increasing the life expectancy of the bulbs. Choosing an LED which is dimmable and has a maximum output of at least 100 Lux gives one the capability to be dimmed to 70 Lux during the production period. In general, linear dimmers with 1 V intervals work well.

To create female light sensitivity, rearing houses need to have light traps with light reduction factors > 3,000,000 to achieve true blackout of < 0.1 Lux. During the 8-hour lights-on period, a light intensity of 1.5 to 2 Lux measured under the lamps should be achieved. Good light distribution in rearing is very important to have all females and males on the same Lux pattern. Having pens in the house with different light intensities will affect the sexual uniformity of females and males at 22 weeks to 23 weeks of age.

Avian eyes adapt quicker to light and darkness than humans. When feed distribution is done in the dark, timing and calculating the amount of time it takes to get the feed around the chain tracks are critical. Do not keep the lights off too long when the feed has circulated because some of the females that are already positioned in front of the feeder tracks will tend to eat more. These females have learned where the track is and can eat in the dark, giving them more time than their counterparts to consume feed. In addition, a bird’s perception of light and colour is more intense than humans.

For this reason, it is important to use uniforms consisting of the same colours for staff that work inside the houses. 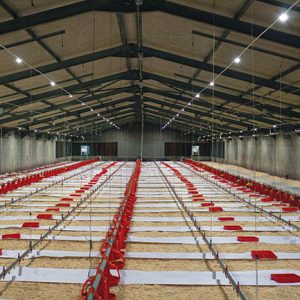 Lumen maintenance is also important and depends a lot on the quality of the lamp purchased. As demonstrated in Table 2, the reduction in brightness is a function of the manufacturer’s quality of the light. A spreadsheet, available from your Cobb technical representative, can be used to compare the lamps available on the market. Metrics of the lamps are used as input, and the spreadsheet will compare the quality and cost.

All LED chip manufacturers should have a report similar to Table 2 for chipsets. The life span is generally based on L70 or 70 per cent of the original lumen output. The chips are run for a certain number of hours to determine how the lumen output declines and the data is used to project the expected life span. Always buy the LEDs and the dimming unit from the same supplier. Mixing and improvising will usually create issues.

Recently, specialized LED lamps for the poultry industry have been developed and are relatively inexpensive. They work with a PSU (Power Supply Unit) to ensure that the correct and consistent current is going to the 48V DC LED lamps. In many cases, for less than US$4000, a 14 m x 140 m community nest production house can be equipped with good-quality LED lights producing up to 100 Lux at bird level, with a PSU and linear dimming capability.

Lighting in breeder production is a critical factor for the reproductive success of the stock, as lighting signals are used by the hen to initiate and sustain reproductive hormones. When considering costs, lighting can also be a considerable percentage of the budget. To improve reproductive success and consistency as well as reduce costs, consider using LED lights.