Utilizing vaccines to reduce antimicrobial use 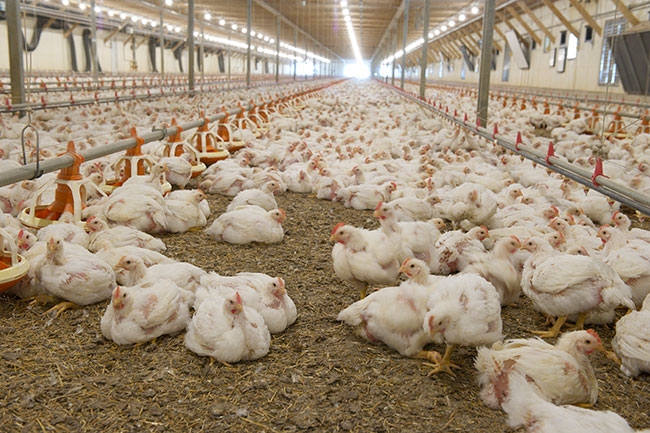 Proper diagnosis and application of vaccines can reduce the frequency and quantity of antimicrobials used on your farm. Here are a few examples related to immunosuppressive diseases and viral infections that can leave birds more susceptible to secondary bacterial infections.

A common infection affecting broiler flocks is Colibacillosis, caused by the bacteria Pathogenic E.coli. Although E.coli is a part of the normal bird’s gut flora, under certain circumstances the pathogenic strains can dominate and invade the bird, eventually resulting in high mortality, skeletal problems, poor performance, high condemnation and overall economic losses.

While proper antimicrobial treatment prescribed by your veterinarian is an acceptable intervention, prevention in subsequent flocks is essential. Bear in mind, Colibacillosis may be triggered by many predisposing factors including viral diseases such as Infectious Bursal Disease (IBD), Reovirus infection, and Infectious Bronchitis (IB); poor gut health; and poor environmental conditions (high ammonia  or excessive dust).

There are two main scenarios related to Colibacillosis: One – primary infection where highly pathogenic strains of E. coli (APEC) populate the farm environment in high proportions and cause disease on consecutive placements with no other concurrent diseases. For those flocks going through acute E. coli disease episodes, your veterinarian can select the best antimicrobial to control mortalities and clinical signs. However, the appropriate intervention for future flocks is to consider complete cleaning and disinfecting, and to vaccinate flocks with E. coli vaccine for at least two to three consecutive flocks.

Two – secondary infection, where E. coli is causing high mortality, but there is an underlying primary cause that results in higher susceptibility to E. coli infection. Producers and veterinarians need to determine the presence of other predisposing factors such as IBD, IB and/or poor gut health. While vaccination with E. coli vaccine can help, it is not sufficient and you should address the primary infections to control overall Colibacillosis at your farm. Antimicrobial treatment under this scenario may have variable outcomes and would not address your primary diseases, especially the viral ones.

Infectious Bursal Disease (IBD)
IBD is an important immunosuppressive disease that can affect broilers mainly during the first four weeks of life and result in various degrees of damage to the bursal tissue. The bursal tissue is the main immune tissue present in young birds such as broilers with short life cycles.

In Canada, we only have IBD infections that are caused by variant strains of the IBD in commercial flocks. If your flock is infected around 15 days of age and younger, the magnitude of immunosuppression is significant and permanent. Affected flocks are uneven, experience higher levels of mortality due to secondary bacterial infections, poor growth and potentially higher condemnations due to conditions such as cellulitis.

On the other hand, IBD infections that occur after 18 to 20 days of age are usually less costly. But if coupled with other concurrent diseases such as Infectious Bronchitis or virulent Reovirus infection, they can result in significant losses. If IBD is suspected or confirmed at your farm, even with no apparent economic losses, it shouldn’t be ignored. The infection can build up over consecutive flocks and eventually result in more costly complications.

Most of our broiler breeder flocks in Canada are hyper-immunized against IBD (via multiple live and killed vaccinations), hence there is usually good levels of maternal antibodies, which are passed on to broiler chicks and persist for the first few weeks of life. However, since each broiler placement may be from different breeder sources, the level of maternal antibodies can vary. Because of this, a percentage of broilers within a flock can be more susceptible to IBD infection than the rest of the flock during the first two to three weeks of life. For broilers, there are three types of commercially available IBD vaccines in the market. These include:

IBD-vector vaccines – These vaccines are applied in-ovo at the hatchery. The IBD vector vaccines are a good choice of vaccine when you have low-to-moderate IBD infection that affects broilers at later ages. The cost of this vaccination is relatively higher than other IBD vaccines.

Intermediate plus live IBD vaccines (Antigen-antibody complex) – This type of vaccine is also administered in-ovo at the hatchery. It is ideal for moderate-to-high persistent field IBD variants at the farm. Under persistent IBD challenge, it is recommended to use over two to three cycles of placements. The goal is to allow the vaccine strain to eventually replace the IBD wild virus through competitive exclusion and reduction of shedding of wild virus. The cost of is relatively lower than vector vaccines.

Live IBD vaccines – these are either applied at the hatchery (spray) or at the farm via drinking water or spray. These vaccines are considered mild to moderate IBD vaccines. They have the lowest cost per bird compared to vector and immune-complex vaccines. However, since they are applied via mass administration, outcomes depends on proper vaccination techniques. The age of birds being vaccinated with this group of vaccines is an important factor for success. If being administered very early, vaccine strains can be neutralized by maternal antibodies and reduce its efficacy.

Infectious Bronchitis (IB)
Damage caused by IB virus to the bird’s upper respiratory tract, especially the trachea, is a major predisposing factor for subsequent Colibacillosis. When IB infection occurs closer to processing, it can result in higher airsaculitis condemnations due to secondary bacterial infection.

Currently, there is no commercially available vaccine in Canada that fully protects against this IB serotype. However, some veterinarians are using Mass-type vaccine at the hatchery followed by Mass/Conn vaccines at 12 to 14 days of age with some success. The idea is that even if these vaccines are not perfect for current field IB viruses, they may be able to lessen the negative impacts. In addition to proper vaccination against IB, application of an E. coli vaccine where Colibacillosis has historically been observed can assist in lowering the losses caused by secondary bacterial infection.

Coccidiosis
Currently, in conventional broiler flocks, ionophores, and non-ionophore coccidiostats are mainly applied in feed and effectively prevent clinical coccidiosis. Under the Chicken Farmers of Canada AMU strategy, these products will still be permitted. However, in flocks raised without the use of antibiotics (RWA), where ionophores cannot be used, vaccination against coccidiosis, either by itself or in the form of a bioshuttle strategy, is a viable option to prevent coccidiosis. A bioshuttle strategy refers to the application of coccidiosis vaccine at the hatchery, followed by a non-ionophore coccidiostat that allows a small proportion of coccidia to grow, usually given in grower feed. The idea is that non-ionophore coccidiostats can prevent clinical or subclinical E. Maxima infection in those chickens that didn’t receive the vaccine adequately and hence more prone to exposure to high volume of oocysts in the litter. The  quality of the chosen anticoccidials allows for the continued development of immunity.

Another available tool in RWA flocks to control coccidiosis is to use non-ionophore coccidiostats in feed with very good success rate. However, care must be taken to reduce the risk of resistance by shuttling or rotating products appropriately.

One of the most important predisposing factors for Necrotic Enteritis (NE) is subclinical coccidiosis (especially E. Maxima). Therefore, control of coccidiosis plays an important role in prevention of NE in broilers. Currently, control and application of in-feed antibiotics is the most common approach in prevention of clinical NE. This is mainly due the absence of an effective vaccine that can prevent this condition in broilers. However, there are number of researchers currently focused on finding an acceptable commercial-level NE vaccine.