Features Health Research a pharmaceutical company needs to move quickly. Poultry Research Research Specialty Research When it comes to developing a vaccine in response to emerging diseases that threaten the lives of animals 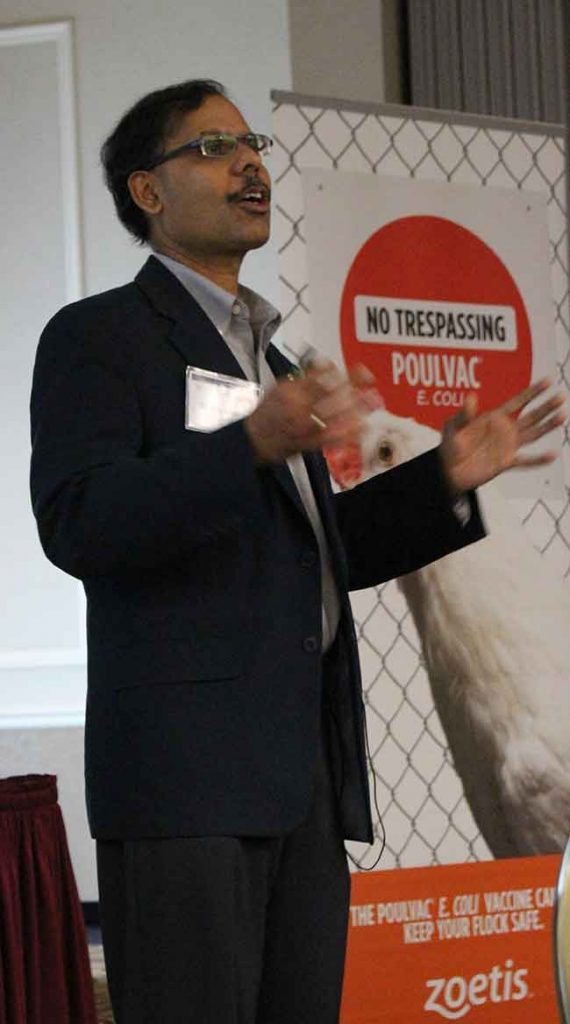 Dr. Raja Krishnan of Zoetis put a global perspective on some of the corporate thought processes that precede his company’s decision to develop a vaccine at the PIC Health Day last year.

When it comes to developing a vaccine in response to emerging diseases that threaten the lives of animals, a pharmaceutical company needs to move quickly.

What it comes down to is being “first to know” and “fast to market”, said Dr. Raja Krishnan, formerly senior director of Swine and Poultry Research and Development for Zoetis and now of companion animal and equine biological research. Speaking to the Poultry Industry Council Health Day in Stratford, Ont., Krishnan put a global perspective on some of the corporate thought processes that precede his company’s decision to develop a vaccine.

Use of surveillance
“The world is becoming a smaller village,” said Krishnan. Zoetis, a leading pharmaceutical company with 10,000 employees in 120 countries, has access to global surveillance networks that use targeted regional surveillance to help guide rapid, high quality product development.

As an example, Krishnan called Avian Influenza (AI) a “disease that is travelling around the world, creating headaches.” With that kind of migration, how do we become proactive? How do we get ahead of the next round of disease? “It’s a decision that can’t wait,” said Krishnan. “Seasons change whether we’re ready or not,” leaving the company to do the right thing for their customers and the entire industry, sometimes making those decisions in a matter of minutes.

Questions, questions
The AI outbreak affected over 48 million birds between December 2014 and June 2015. A lot of questions swirled around the decision to develop a vaccine; the disease was moving quickly. Did the industry want a vaccine? Would they use it? Would the government endorse it? Would the USDA recommend culling or vaccinating? Even if a product were developed, would it be relevant? Does it make sense?

Adding to this uncertainty is the fact that AI doesn’t play by the rules. The virus can mutate rapidly, meaning that the vaccine needs to be changed frequently. That’s one of the challenges. “AI constantly surprises us,” said Krishnan. “Nothing beats preparedness but we may have to course-correct collectively.”

When asked about the drivers behind the U.S. poultry industry deciding to use or not use the AI vaccine, Krishnan listed several of the questions such as, when will the product be available? Is there a risk of AI going into broilers as we go into the winter? Will this pressure us to act?

Political aspects
“Let’s not underestimate the economic and trade implications,” said Krishnan, what he called “the political aspects.” Will use of a vaccine result in trade restrictions? How does the issue get played out in the news? How does the consumer view the issue? What will the government do? How will pressure from retailers like Walmart affect vaccine use? He described the vaccination issue as “a jigsaw puzzle with so many uncertain parameters.”

Under a similar disease challenge in April 2013, Porcine Epidemic Diarrhea (PED) was identified in the United States; by September 2014, conditional vaccine licenses were being issued in the U.S. Everything happened rapidly, said Krishnan, fuelled by a commitment to U.S. pork producers and the veterinarians who support them to help contain an outbreak in 30 states that was responsible for the deaths of more than seven million piglets in the U.S..

What if their company goes down the wrong path? Krishnan admitted that sometimes a vaccine works in a test tube but falls apart in the real world; sometimes a disease doesn’t cause a problem, in which case the resources will be pulled back and re-invested.

With AI, are we headed in the right direction? Is it easier to cull the birds, clean up and move on? “That’s the million dollar question,” answered Krishnan. Thirty years from now we’ll have stories to tell.