AgriLux has been specifically designed for the egg-laying industry 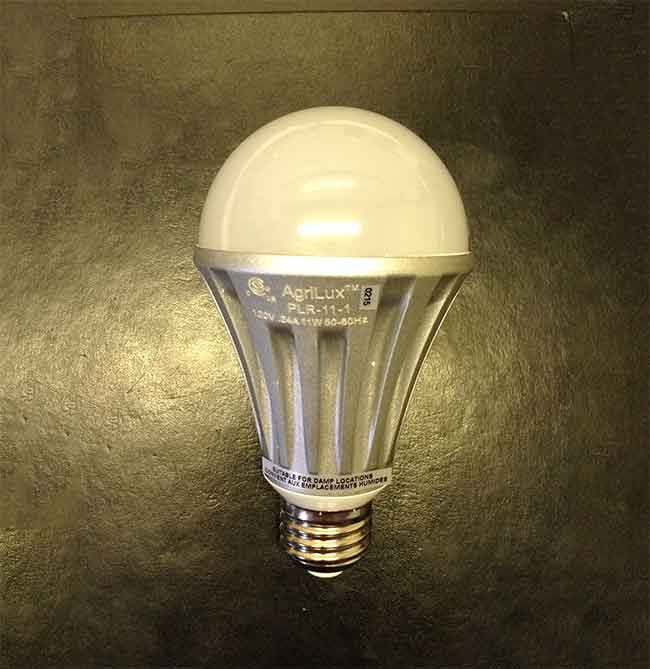 U of G’s Dr. Bedecarrats has validated his lightbulb design that provides 60 per cent red spectral light for layers

The current phasing out of incandescent light sources has created an urgent need for more energy efficient lighting systems in the poultry industry. To date,  a lighting system designed specifically for egg producers has been lacking, but Dr. Gregoy Bedecarrats has developed a special LED light bulb to address this need

In an interview, Dr. Bedecarrats, a Poultry Physiologist from the University of Guelph, described the theoretical design criteria for an LED light bulb to be used specifically by the egg-laying industry.

“Firstly, in birds, light is perceived through retinal and extra-retinal (hypothalamic, pineal) photoreceptors capable of converting light into neuroendocrine signals. Secondly, direct photo-stimulation of the hypothalamus results in activation of the reproductive axis,” he explained. “And finally, our research shows that light from the red spectrum is critical to stimulate the reproductive axis and maintain high levels of egg production in hens, and this effect is mediated by hypothalamic photoreceptors.”

The research approach undertaken to validate the new LED light bulb included testing its efficiency (electric consumption) and efficacy (on production parameters) with comparable light sources at the University of Guelph’s Arkell Research Station prior to testing in a large scale commercial barn in Ontario.

“Use of this 60 per cent red spectral output LED light bulb is capable of increasing egg production by three per cent, decreasing feed consumption by three to four per cent, and reducing electricity consumption by 80 per cent  and 20 per cent respectively  when compared to incandescent and compact fluorescent bulbs,” said Dr. Bedecarrats in describing the overall
findings of the validation studies of this new LED light bulb. “These results show that this light bulb can increase productivity and significantly reduce energy costs in a commercial setting. Thus, it represents a perfect option for barn retrofit or new barns in the egg-laying industry”.