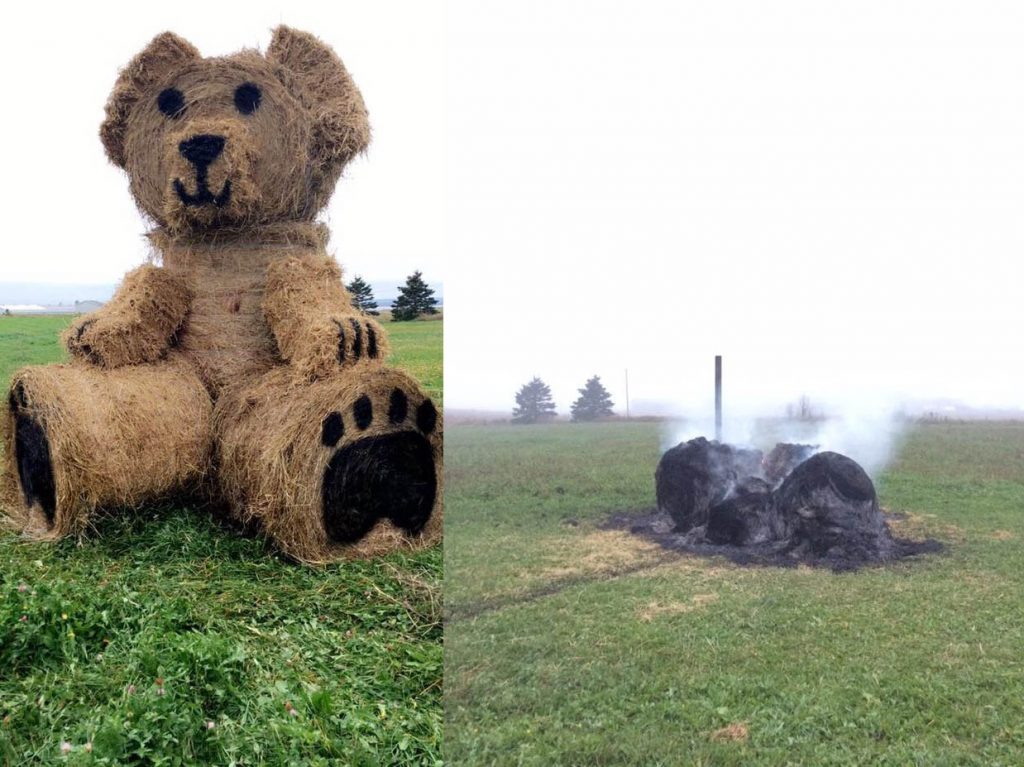 The beloved, five-metre-tall bear sculpture was burnt to the ground.

Blake Jennings, who has fashioned a bear out of hay every fall for 14 years, said he awoke Tuesday to discover this year’s sculpture had been burned overnight.

“A ridiculous amount of people are contacting me to say how much it means to them and their children,” he said. “Everybody is so upset, and their kids are upset.”

He posted photos to his Facebook showing the happy-looking teddy bear had been turned into a blackened, smoking ruin.

Jennings’ younger sister, who has special needs, is among those devastated by the vandalism.

“My little sister – that’s her pride and joy. She would name it every year after her favourite stuffed animal,” he told Global News. “ She was quite upset this morning to find out someone burned it.”

The bear was still sitting in its place in the middle of a field Monday night when he came home from delivering pumpkins at around 9 p.m. By 6 a.m. when he woke up, he could smell smoke.

“My cousin texted me and told me, ‘Someone burned your bear,”’ he said. “Because I had smelled smoke, it immediately dawned on me that I had been smelling burning hay.”

Based on the tire tracks in the field, Jennings believes whoever started the fire came on a four-wheeler and attempted to leave quickly.

Jennings has filed a report with police but says he knows there isn’t much they can do.

Meanwhile, he said he plans to keep the tradition alive next year.

“I’ll just keep putting it up every year, but it sucks how someone could be so disrespectful,” he said.

“There are a lot of families looking forward to taking their pictures in front of it. I’ve put a lot of effort in it for many years for the families coming to buy pumpkins. Last year, I left it up all through Christmas and decorated it and everything.”

He was also upset at how dangerous the arson was, saying the ditches around the field are currently filled with dead grass, and conditions have been dry.