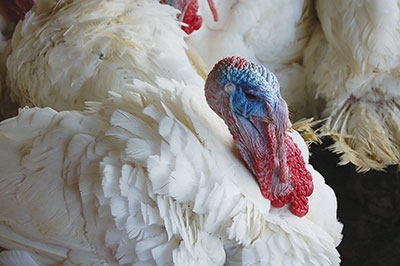 When a two-day raid in 2011 closed down a Butterball turkey facility, law enforcement examined and took photos of 1800 individual birds Butterball LLC

No company or farm wants undercover employees infiltrating their barns, videos demonizing their operations, and search warrants being executed on their property.

But that’s what happened to Butterball LLC, when a hidden-camera video showing turkeys being abused was released by  animal rights activist group Mercy for Animals, prompting law enforcement to obtain a warrant to search Butterball’s Shannon, N.C. facility.  The two-day raid in 2011 closed down their barns while investigators examined and took photos of 1,800 turkeys, one bird at a time.

Tilley told delegates at the 2014 Farm and Food Care Annual Conference in Milton, Ontario, that all other employees were told to leave the area while she watched barn biosecurity being breached. Eventually she persuaded them to at least put on hair covers and personal protection equipment.

Butterball has long held a zero-tolerance policy for animal abuse and notes that any employee found to have violated its animal care and well-being guidelines or witnesses abuse and fails to report it will be terminated. Faced with a need to act immediately and decisively in the face of serious allegations, the first step was to investigate and suspend the six employees “exposed” in the undercover video.

“We want no undercover videos and no abuse,” said Tilley.

The Animal Care and Well Being Advisory Council is an independent panel of industry experts that has been set up to review operations at Butterball and make recommendations. Council members include Temple Grandin, Professor of Animal Science at Colorado State University; Joy Mench, Professor of Animal Science at the University of California-Davis; Yvonne Thaxton, from the Centre for Animal Well-Being at the University of Arkansas; Jesse Grimes, Poultry Science Extension Specialist at North Carolina State University; and Michael Martin, Professor of Poultry Health Management at North Carolina State University. Each serves a two-year term, contributing to an open dialogue related to best practices and new developments in turkey production.

Butterball has also enhanced its regular training offerings. Both new and tenured employees now receive mandatory training and participate in ongoing training sessions to target continual improvement at their specific job. There has always been a zero tolerance for any employee mistreating turkeys or failing to report mistreatment.  Tilley says they have set up a Butterball hotline, where animal care concerns can be reported anonymously with immediate follow-up.

Butterball is also currently implementing several pilot projects to verify that their turkeys are receiving proper care, such as video auditing and refining internal and third party audits. In order to evaluate and monitor transportation procedures, a series of three video cameras now record handling in the barn, chute and loading. Through video monitoring they can see potential areas for review and provide re-training to an employee where necessary.

Euthanasia methods are being reviewed, looking at approved alternatives to blunt force trauma. Tilley described an on-farm euthanasia decision tree that they have developed, which consists of questions pertaining to a bird’s health status to allow employees to make consistent, objective decisions on whether or not a bird should be euthanized.

For the truck loading itself, Butterball is evaluating the use of a tongue loader, where birds are put inside a coop which then moves on a belt to the truck. Tilley says this could alleviate some potential handling problems. They will also be evaluating processing methods, comparing controlled atmosphere use of CO2 stunning on the trucks versus a shackling and stunning procedure.

Butterball has packaged its animal care platform as part of its new Traditions with Purpose program, unveiling the commitment in a September 2014 press release. Beyond the basic commitment to continual improvement of animal care, the corporation has also outlined commitment to people, the planet, and philanthropy. “It is our responsibility to make positive impacts throughout our business,” said Butterball President and CEO, Kerry Doughty. “Our new corporate citizenship platform helps define this important role, particularly our signature commitment to animal care and well-being.”