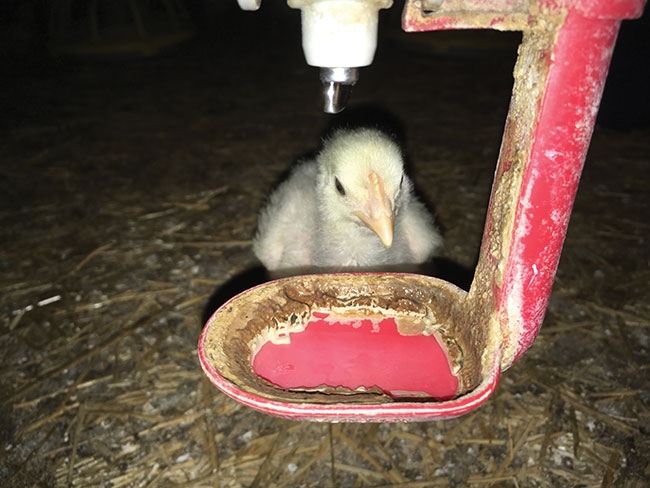 In the new era of reduced antibiotics, producers can ill afford to have water problems as pictured here.

Water quality has never been more important.  The elixir of life, as water is known, gives farmers an early warning system for disease, and a delivery mechanism for medication and vaccines. Water is of such importance in any life that John F. Kennedy once said, “Anyone who can solve the water problems is worthy of two Nobel prizes- one for peace and one for science.”

Science tells us that chickens consume twice as much water as feed, so slight improvements in your water can have a significant impact on feed conversion, livability and disease. In the new era of reduced antibiotics, water treatment options such as acids and sanitizers will be crucial to your operation.

Tips to evaluate your water
Evaluate the birds and equipment in the barn by asking yourself:

Sanitizing water
Is there a better way to clean and sanitize water lines? Hydrogen peroxide or chlorine bleach are the most common methods in the industry. Hydrogen peroxide alone is considered a good sanitizer at optimum levels and is not dependent on pH, but the shelf life and residual level in the water lines is short. Chlorine bleach effectiveness is greatly reduced when the water pH is high, meaning greater than seven, which is the case in most water sources.

A promising disinfectant against bacteria and viruses is chlorine dioxide. It is less corrosive and more effective than bleach in the removal of iron. Chlorine dioxide is 2.75 times more active (even in contaminated water) and more reliable. Chlorine dioxide does not affect the smell or taste of drinking water. It is also effective in water that has high sulphur content.

Chlorine dioxide has the stability to disinfect in the pH range of three to 10 and studies show better taste and improved water intake. Another benefit is its effect on breaking apart biofilm (a complex substance created by bacterial and fungal organisms) and delaying the rate of its regrowth.

There are ways to do this safely – by making sure you always have the water in the container first and then add the chlorine dioxide liquid or powder components in the sequence provided by the manufacturer, or you can contain the reaction in the water line itself.

Organic acids as water treatment
Are organic acids the future, especially as antibiotic-free production increases? The science is clear – birds that consume water treated with organic acids have improved feed conversion, improved pathogen control and reduced gastric pH levels in the lower gut. Organic acids such as formic, propionic, sorbic and lactic, are useful for moderating gut flora in the bird.

Some antimicrobial activity happens at a pH of five to six, but most pathogenic bacteria important to poultry cannot survive below a pH of four. For example, E. coli and Salmonella can’t survive when the pH is below four. A low pH is helpful in the bird’s crop and digestive system since these are major sites of bacteria colonization. To keep the pH level steady at 3.8 (or at least below four) the organic acid mix should contain a buffer (a salt).

Improved weights for age (breed standard weight gain per day of age) are often seen when using organic acids, particularly lactic and formic acid. This is likely due to the reduction of pathogenic bacteria as well as increasing the numbers of beneficial bacteria such as lactobacilli.

According to Arian de Bekker, who sees the positive effects of water acidification at MS Schippers Canada, “We believe that lactic and formic acid have really positive effects within the bird. Throughout the gastrointestinal tract, these acids optimize the chicken’s own enzymes and acids and allow the feed to be used more efficiently.”

There is also evidence that organic acids increase intestinal cell growth, allowing for more surface area and absorption of nutrients. Another reason to use organic acids is to potentially reduce the need of feed antibiotics. Antibiotics and organic acids both reduce competition against good bacteria, increase protein and energy digestibility, and reduce the significance of subclinical infections.

For water acidification to work well it is important to have clean water lines. Organic acids will have a reduced effectiveness in the presence of biofilm inside the water lines before it even reaches the birds.

In the new era of reduced antibiotics, producers can ill afford to have water problems as pictured here.

Conclusion
Improving water quality with good management practices must be a new focus for every producer. Water treatment and disinfection are excellent methods to prevent disease outbreaks (by opportunistic pathogens such as E. coli, Salmonella sp. and Clostridium) and at the same time improving the performance of the flock.