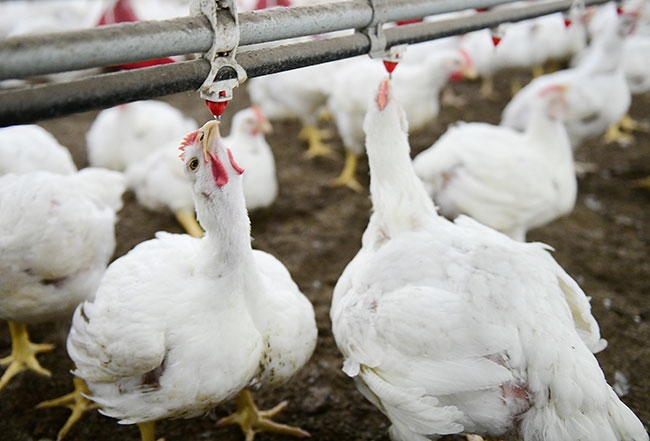 Some producers go the extra mile to ensure their birds have access to top quality water. Photo: Chicken Farmers of Ontario

Water is one of the keys to maximizing the performing of your flock. This being the case, some producers go the extra mile to ensure their birds have access to a top quality drinking source. Here, we look at three producers and their unique approaches to water management.

Jordan Fois: Nothing but the best for his family and broilers alike
Jordan Fois, a second-generation broiler farmer from Wellandport, Ont., is an innovator who isn’t afraid to take a risk or make an investment in order to raise a better product. Though he has access to decent water on farm, he believes ‘decent’ isn’t good enough for his family or his birds. Instead, he ships in water by truck and then puts it through an elaborate decontamination and cleaning system.

“I’m always looking for that edge – that Holy Grail,” he says. “I’m a really big believer in super clean water because I think water is one of the most important things in life.”

Fois believes North Americans take water for granted, “We turn on a tap and assume what comes out is clean, healthy and life giving,” the producer says. “But do you know for sure that there’s no biofilm; no contaminants? There are only four factors that affect production: Quality of the chicks; management; feed; and water. This water system takes the water factor right out of the equation.”

Fois currently raises five cycles of 70,000 birds per year. Ten years ago, he invested in a Bauer Energy Design Inc. water system for his farm and family. The system is complicated. It relies on electro-coagulation, a patented process that changes the energy charge of water in order to decontaminate and remove impurities, as well as a multi-step filtration process and a UV light water purification treatment.

According to designer Walter Bauer, the system’s multi-stage process results in medical grade water with very unique properties. Though the science of the system is complex, Bauer says the results are clear – the bacterial populations in the digestive tracts of chickens watered with his water shift from primarily anaerobic (not needing oxygen) to almost exclusively aerobic (needing oxygen) populations. According to his research, the shift reduces ammonia in chicken feces and has multiple health benefits.

“I’m not going to vouch for the science because it’s way over my head,” Fois says. “But, I can vouch for the reality of what’s happening and the improvements I’m seeing in my barns.”

Admittedly, such an involved water purification system is a hefty investment. Still, Fois believes the return on that investment is clear, marked and rapid.

“Feed conversion depends on a lot of factors. Sometimes I hit a 1.58; sometimes I hit a 1.7. But overall, there’s a noticeable difference in my broilers’ performance. It’s a simple cost-benefit analysis. Based on condemns, days-to-market, feed conversion, I think I paid it off in seven years. But in terms of my family, I see that return on investment as immediate.”

Stewart Ritchie: Researching rain
Abbotsford, B.C., broiler producer Stewart Ritchie has insatiable curiosity. A veterinarian and nutritionist by training and part-time researcher by passion, Ritchie uses his own broiler barns to trial management, nutrition and innovations. In recent years, he’s developed a particular interest in sustainable systems. He has installed solar panels to power his barns and, most recently, installed a rainwater collection system.

“Our city water is outstanding. We don’t have a quality issue here. This is more a matter of interest than of quality. When you fly over a lot of barns, you see a lot of bare roofs. I thought, why don’t we recapture some of the sun and rain,” he says.

Ritchie is very new to collecting rainwater. Currently, he has collection, filtration capacity and various purification and sanitation systems in place. However, as a veterinarian who is very familiar with avian influenza, he has a very healthy concern for biosecurity. Because of this concern, he will insist on being entirely confident in the water’s quality before it ever goes to his birds. Therefore, he hasn’t actually started using any of the water in his barns.

“I’ve got to be honest: I could have bought into a mistake. We just don’t know yet. But we’re in it, and there’s value in the data gathering. This is on-farm research and we’ll share the results and hurdles with other producers for their benefit too,” Ritchie says.

Currently, the producer is tackling the issue of pollen and dust in his water. “I didn’t know the pollen was so heavy. It’s almost gel-like when it is filtered out. You can’t have that going into the nipple drinkers,” he says.

“There are so many variables that are going to be very specific to your farm and your area.”

He adds that, when it comes to these sustainable systems, there are two non-negotiable variables – robustness and the dollars and cents of the system.

“We need a system that doesn’t break down. Producers are busy. It’s risky. You don’t want to add risk or if you do add risk you need to mitigate it to an acceptable level,” Ritchie says.

“I am willing to invest to gather data, but ultimately these concepts have to make sense financially.”

He hopes to use this project both to become more sustainable and to learn more about how water intake impacts chicken health.

“I’ve always been interested in nutrition via water (NVW). I’ve always felt the water-to-feed ratio is a very important metric and can be associated with bird health and performance. By doing this I’m on a learning curve. It’ll let me gather accurate data, and I do think that will be very useful knowledge.”

Ritchie has been a practising veterinarian since 1989 and a chicken farmer since 1992. He currently has 50,000 broilers divided into various sections for research purposes. In addition to developing a functional rainwater collection system, he’s currently testing various other broiler production practices.  He sees his trials as a calling, a passion, and a commitment. He lives and works, he says, according to one quote: “As I heard someone say: if you’re not living on the edge you’re taking up too much space.”

“The reason we decided to use rainwater was because we tried to drill a well and the water we hit was very black and very high in sulphur. The neighbours have bad water as well. We thought we could better deal with the challenges rainwater brings than use that water we could tap into from the ground,” the farmer says.

The Van Der Molens’ system had relatively low investment cost and is intentionally simple. Rain falling on each of their two barn roofs gets directed into one of three 10,000-gallon cisterns via a simple gutter system. The captured rainwater is stored without treatment until, just before use, it is pumped through a peroxide decontamination tank. The only filtering is a leaf-guard on top of the eavestroughs.

“There is absolutely nothing fancy about what we’re doing here. People have been catching rainwater like this forever. But, if you don’t have access to good water, it’s a perfectly good option,” he says.

Van Der Molen is aware of the disease risk inherent to using rainwater. He’s installed guards to stop wild birds from resting on his eavestroughs but knows that only goes so far to limit fecal contamination and possible disease transfer from wild populations. He trusts the sanitation provided through peroxide. Though some producers prefer chlorine to peroxide to decontaminate water, he believes peroxide is the safer, more forgiving option.

“Peroxide offers a bigger, safer window. If your chlorine is a bit too high, the birds won’t like it and they won’t do well. With peroxide, if your pump injects a little extra, that’s okay,” he says. “And, it’s a lot easier on the system: Chlorine eats away at rubber seals but peroxide is a lot less harsh.”

Van Der Molen doesn’t worry too much about other airborne contaminants like smoke and dust. Despite not having any filtration system, the cisterns stay quite clean.

“A dirty filter is worse than just letting solid particles go through. If you catch it in a filter, it just sits there and algae builds up. There’s nothing that gets stuck in the barn in the drinkers, so I’ve really not worried about filtration much,” the producer says.

With the 20:20 hindsight of experience, Van Der Molen wishes that he had installed the top of the cisterns aboveground to mitigate groundwater seeping in. He also wishes that he had done everything bigger – bigger cisterns, more downspouts and bigger eavestroughs. While his area should typically get adequate rainfall to meet his birds’ needs, he isn’t able to capture all that water as the eavestroughs and downspouts don’t have the capacity to move enough water in a heavy downpour, and the cisterns don’t have the capacity to hold it all.

“The engineering part of this wasn’t ideal. We’ve had to buy water a few times when we have a drought in the summer, mostly because I just didn’t build big enough to capture all the rain that comes down. It doesn’t cost that much more and it’s not that much harder to build it a little better in the first place. It’s much more of a challenge to fix it after the fact,” he says.

Van Der Molen’s neighbour, impressed by his simple system, recently installed a very similar system on his own farm.

Some producers go the extra mile to ensure their birds have access to top quality water.

On-farm water management considerations
Farming would be so much easier if there were proven answers that worked in every agricultural operation. However, like everything in agriculture, finding the right solution for your on-farm water needs depends on multiple factors:

First, water is not a one-stop solution. “No matter how good your water, a poor poultry manager won’t get the benefits of excellent water,” says Walter Bauer of Bauer Energy Design Inc. “Everything starts with good management.”

Second, only invest in what suits you and what you believe in. “I’ve always thought water was one of most critical factors of life. I was looking for a system long before I found the one we have. If you don’t have conviction in this as a priority, though, you might not be willing to spend the money on a system,” says Wellandport broiler producer, Jordan Fois.

“If you get bad chicks it doesn’t matter what you do,” producer Bruce Van Der Molen says. “It all starts with the quality of the chicks.”

What is the source of the water?

Are there issues with health or performance of past flocks?

Are additives run through the drinker system?