Updated tips for a new era of poultry production. 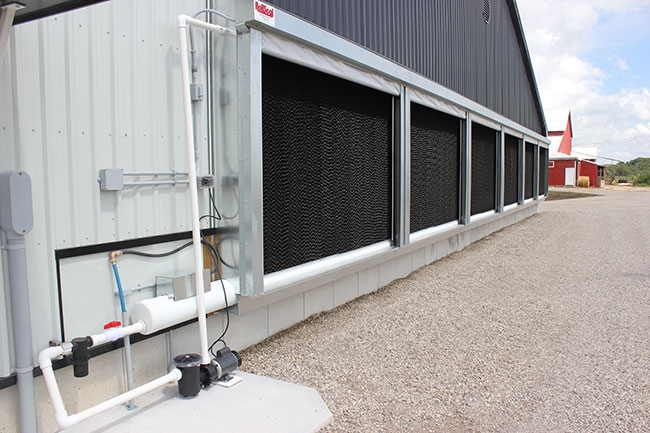 Water-based cooling systems like evaporative cooling pads have seen a resurgence in recent years in all types of poultry barns. Photo: OMAFRA

With the elimination of antibiotics occurring across Canadian poultry production, factors such as water quality are becoming much more important in the quest to optimize bird health.

At the Poultry Industry Council’s ‘Health Day’ this summer, Al Dam and Dan Ward (poultry specialist and poultry structural engineer respectively at the Ontario Ministry of Agriculture, Food and Rural Affairs) presented on ways to ensure proper water quality and supply. They noted that every farm should have its well water tested regularly, beyond the requirements of the On-Farm Food Safety Assurance Program from the Chicken Farmers of Canada. Samples should be taken at well head and furthest line from the well as well.

“For drilled wells, once or twice a year would suffice, and for dug wells, sand points and any surface water sources, then the recommendation is every season of the year,” Dam says. “The free test at your local Health Unit just looks at E. Coli and total coliform bacteria (indicators of fecal contamination in water source), so pay to get the water analysed to see what other issues you may have. Issues could include high sulfur, salt, nitrates, calcium, phosphorous and so on. The complete analysis will tell you the general health of the well and what treatment options, if any, may be needed.” Draw down and recharge level of your well should also be checked periodically to make sure you have enough capacity for your operation.

Filters must obviously be changed regularly to prevent issues caused by sediment and other particulates. Ward says determining the right time to change filters should not be an issue if farmers continually monitor the pressure dials before and after the filter unit. “This is especially important at the end of a meat bird flock,” he notes, “or during the hot weather when water demands are the highest.”

Biofilm management involves flushing water lines regularly with pressurized water. When asked if biofilm is a bigger problem nowadays with the use of probiotics in Canadian poultry production growing by the day, Dam says it’s more of a concern if there is iron in a farm’s water. “Iron-reducing bacteria use the iron to create the biofilm,” he explains. “Once that’s established, then the other products we may use contribute to the further growth. An iron filtration unit should be installed if your iron is too high (>0.3 ppm). Unfortunately, a lot of the products we put into our waterlines to help with bird health can contribute to biofilm.”

Dam and Ward recommend flushing waterlines once or twice a flock for meat birds, and once a month for layers/breeders, and using a cleaner in between flocks. Preston Rives, Canada/U.S. sales manager with global agricultural hygiene firm CID LINES, recommends that when using cleaning products between flocks (such as his firm’s ‘CID 2000 at a concentration of two per cent), producers should trigger all nipple drinkers as the solution flows through the lines. Let the solution sit in the lines at least four hours and then flush the lines with fresh water, triggering all nipple drinkers again. Dam adds that proper flushing is very important when high doses of cleaner are used. “The scale or biofilm or whatever that you dislodge needs to be flushed completely so that the debris doesn’t end up clogging your nipple drinkers,” he says. (Note that while use of CID 2000 is presently limited in Canada to use between flocks, Rives says regulations may in future allow it to be used in-flock as well, as it is allowed and used in many other parts of the world.)

In terms of other issues relating to poultry farm water quality, Dam lists one that’s often overlooked to be calibration of the injector/medicator. “Also, don’t forget the maintenance that’s needed on the pressure regulators on the nipple drinker lines themselves,” he says. “They can get clogged with biofilm and not have the output that you think they should.” He adds that finally, flushing water lines is important during high heat periods to ensure that all the birds are getting cool, fresh water.

Water-based cooling systems like evaporative cooling pads have seen a resurgence in recent years in all types of poultry barns.

Quantity and cooling
As to whether well water levels are a concern these days, Ward notes that water level/aquifer recharge capacities in various areas of Ontario and beyond can be affected by many different issues. “Drought can be an issue, and water-taking by other high use users can lower water tables,” he explains. “What kind of aquifer you have and the depth also determine its recharge capacity.”

Ward notes that water-based cooling systems (sprinklers, high pressure misters and evaporative cooling pads) have seen a resurgence in recent years in broiler barns but also broiler breeder and layer barns. He says this is the only cooling method that actually lowers barn air temperature due to the large amounts of heat removed from the air next to water when it evaporates (the energy required when water changes state from liquid to gas). When deciding what type of water-based cooling system to install, type of poultry farm and estimated frequency of use are usually the deciding factors.

Extra water requirements during heat waves could overtax a farm’s water system if water is being pumped directly from wells and there is only a minimal storage tank. The issue could be mitigated, says Ward, by adding large storage buffer tanks.

To check how an evaporative cooling system is functioning, Ward advises that the easiest way to do this is to inspect the pads. “If there are blocked header pipes (dirt/debris blocking the distribution holes), then there will be dry patches on the pads directly under these holes when system running,” he says. “If there is scale on the pad, this will indicate if the softener is working correctly. Either of these maintenance issues will reduce the cooling effectiveness of the equipment.”

10 tips for flushing and cleaning waterlines