As producers reduce their use of antibiotics, water management innovations are increasingly important

Impex’s I-Flush is an automatic flushing system for drinking lines that are used in both floor and caged drinking systems. PHOTO CREDIT: Impex

For years, producers have focused much of their attention on poultry nutrition. They’ve paid little attention to water and its role in bird development. Experts, though, say that water management and cleanliness is the next big issue, especially as producers focus on reducing their use of antibiotics. In recent years, this trend has surfaced in the form of new technology and can be seen in everything from cleaning and disinfection products to flushing systems to water distribution in drinking lines.

New technologies to control water pressure
Impacted by feeding times and lighting programs, a poultry flock’s need for water changes throughout the day, as well as throughout the different stages of growth. This change in demand can impact water pressure, a challenge that producers have in the past managed manually. Two systems promise to make this task easier, though.

Water on Demand by Plasson allows producers to control and manage water pressure on all drinking lines throughout the house from one central point. By changing just two parts of the Plasson Line Pressure Regulator, all pressure regulators are converted into pressure reducers. From one central location, producers can manage water pressure in all the drinker lines by using a minimum of two pre-set Pressure Regulators (one for low-medium pressure, and another for high pressure). The result is uniform pressure throughout the entire nipple system at all times.

Keith Gladfelter, North American division manager for Plasson products at Diversified, has been selling Water on Demand for over eight years. While most systems have been installed in the U.S., they’re slowly making their way into Canadian poultry houses. The draw for American producers is water’s impact on weight gain. Daily growth averages are extremely important to U.S. poultry producers, Gladfelter says.

In Canada, where there’s less emphasis on average daily growth, producers are more attracted to Water on Demand’s other benefits, namely lower relative humidity, which has been shown to be 10 to 20 per cent lower in the Water on Demand houses as compared to regular houses.

The advantages of the Water on Demand system are greater in winter when moisture problems are more prominent, Gladfelter says. Other benefits include improved foot health and energy savings from limiting the use of ventilation to dry the house. Drier floors are thought to lower ammonia levels.

But the biggest benefit is simplicity. Instead of having to adjust column pressure at twice, if not three times a week, producers can now set pressure in a control room as needed. Where producers use lighting programs, the system allows for increased water volumes to be delivered during the peak water consumption periods. This is especially important in the first hour of lighting where 17 to 19 per cent of consumption occurs. In fact, Gladfelter says, 28 to 40 per cent of daily water consumption takes place in just two hours, the first and last of the day.

A second system, this one by LUBING, also promises to improve water pressure and distribution. Like Water on Demand, LUBING’s GravityPlus Water Supply Control System is a means for water distribution that allows producers to control water pressure in an entire poultry house from a single point. But that’s about where the similarities end. Rather than using pressure regulators, GravityPlus uses gravity to maintain pressure. Producers can adjust water pressure in all drinker lines quickly and accurately adjusted simply by turning a winch.

“You could compare it to a siphon,” he adds. “It’s like a multi-point siphon system.”

Because the system is based on gravity, there is no calibration required.

It is designed to supply a tremendous amount of water with very little restriction, Hawk says. Under high demand there is very little drop in pressure.

“When the birds hit the lines very hard, say when the feed turns on and they all go to the drinkers, we don’t see a pressure drop,” he says. “We don’t have to compensate. The system is so open to flow that it can handle high demand with little variation.”

LUBING’s GravityPlus Water Supply Control System has multiple parts. On the end of each drinker line, there is a flush breather. The water line comes from the ceiling and connects directly to the drinker line. Water runs to the drop lines via a trunk line, which is bracketed to the ceiling. The trunk line (and anything above the water line) is under negative pressure, which actually eliminates the risk of water leaks.

“What we have is the potential for air to get back inside of the system,” Hawk explains, “since it’s inverse of what’s normal.”

An AirBox situated on the ceiling at the highest point in the barn acts as a safety mechanism to remove excess air from the system if it’s ever introduced.

In the control room, there will be two tanks, one for the front half of the house and one for the back half. The tanks have a float valve that holds the water constant, so as the birds drink, the water flows from the tank to the drinking lines automatically. As the tank level drops, the float valve turns on and refills it, holding the tank constant. If you want to change the water pressure in the entire house, there’s a winch system included with the tank to move the tank up or down to match the desired level.

LUBING also offers an add-on component, a recirculation system, made possible by the fact that the system doesn’t use regulators.

“We’re looking at different things we can do with that,” Hawk says. “Whether it be UV sanitation, water filtration – maybe we do a temperature-based control system where the temperature and the lines, whenever the full system starts to get to warm, we can actually add fill water to keep the temperature regulated.

“It also gives us an opportunity to make sure that the medication and vaccinations are distributed evenly throughout the entire house,” he adds. “You can run this system without disrupting any water supply to the birds or changing the pressure.” 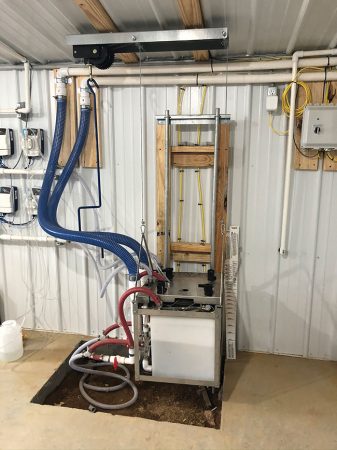 Flushing system improves water hygiene
Another recently launched innovation is I-Flush by Dutch company Impex. I-Flush is an automatic flushing system for drinking lines that are used in both floor and caged drinking systems. The I-Flush total hygiene solution consists of a computer, which controls the entire flushing system by processing information received from the various sensors, a pressure regulator, the I-Flow end air outlet set and drainage.

The Impex I-Flush system can be expanded to include a biofilm sensor and a temperature sensor. The biofilm sensor, which is mounted to the drinking water lines, detects dirty water and biofilm. Using an LED light, the sensor detects the cloudiness. When the preset maximum level is exceeded, the lines are automatically flushed.

Impex I-Flush can be used with any type of drinking line.

While not a lot of producers choose to flush their lines, Impex area manager Remco Heijman says, they are increasing in popularity as producers shift their focus to water quality.

One of the advantages of the system is its flexibility, Heijman says. In broilers, for instance, producers can intensify flushing in the beginning of the growth cycle, and decrease flushing frequency as the birds develop.

“In the first few days, the small birds don’t drink so much,” he says. “Water gets very warm because of the climate of the house, especially in the first few days. Later when the birds are bigger and drink more, flushing is less needed.”

Biofilm is caused by organic components in the drinking water and the addition of medicines, vaccines, feed supplements through the drinking water, Bylsma explains. Microorganisms live in the biofilm, which helps protect them from disinfectants.

“By removing this biofilm with Hydrocare, you remove 99 per cent of all organisms, and they have no chance to protect themselves against disinfectants,” Bylsma says.

“With the removal of antibiotics, we have a little more exposure to bacterial challenge in water,” company president Kevin Weeden says.

“Water quality has become absolutely critical now,” he continues. “The probiotics we’re using today instead of antibiotics, a lot of them have carriers that are sugar based or whey based and they provide a nice food source for bacteria in the water.”

Weeden specialists first test water for pH and scale-causing minerals. Following that they remove biofilm from the lines. Their product of choice is Proxy-Clean, a stabilized hydrogen peroxide product. Weeden Environments is the Canadian Manufacturers representative for Proxy-Clean.

After biofilm has been removed, Weeden then recommends removing mineral scaling by lowering the pH for 24 hours using Jefacid, a blended acid. After the water lines are cleaned, growers then sanitize the water using their preferred water sanitation program. The “Water Smart Program” recommends acidification for effective chlorination to provide ongoing water sanitation.

Sprinkler system cools birds, not barn
Weeden Environments also has several North American patents on a cooling system that’s used across the U.S. and Canada. Nearly all barns in the U.S. are tunnel ventilated and utilize a cool cell, which is an evaporative cooling system designed to lower temperature in the barn. While the system effectively cools the barn, it also increases humidity and uses a lot of water.

Weeden sprinklers, on the other hand, use surface wetting to cool poultry as long as possible before the cool cell comes on. The system uses a larger droplet size, making it a sprinkler system, not a mister.

One of the advantages of the system is that it cuts water use by as much as 50 per cent, Weeden says.

“In the last five years, we’ve done over 1,000 barns in the U.S. where they’re incorporating our system in conjunction with the cool cell with the purpose of saving water, maintaining humidity and cooling the birds during heat stress,” he says.

Approximately, 300 poultry houses in Canada have been fitted with Weeden sprinkler systems.