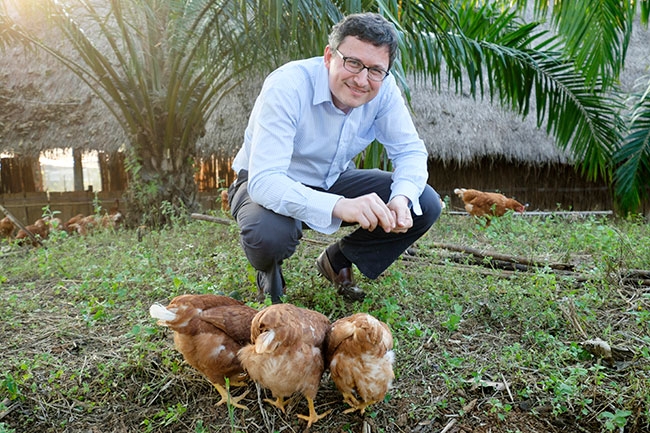 In the November 2016 issue of Canadian Poultry magazine, we published a story on building inclusive businesses: “Growing bottom lines with social impact.” The story was based on a talk given by Markus Dietrich, co-founder and director of Asian Social Enterprise Incubator Inc., at the International Egg Conference in Warsaw, Poland.

Dietrich is the co-founder and CEO of his own social enterprise, Hilltribe Organics, an organization that helps hill tribe communities in northern Thailand build thriving egg businesses. Freelancer Melanie Epp had an opportunity to visit the organization in October 2016. This is the story of how one social enterprise helped raise a marginalized community out of poverty, proving that eggs can make a difference.

Thailand in October is unbelievably hot and humid. Temperatures soar to 30°C and above, and humidity reaches a sticky 98 per cent. Even your sweat sweats. Chiang Rai, where Hilltribe Organics is based, is no different. It’s a place where the weather is unpredictable. One minute the lush green hillsides are bathed in sunlight, the next they’re soaking up a torrential downpour. It is here that our story begins.

The hill tribe communities of northern Thailand – the Akah, the Karen, the Hmong and the Lahu – are nearly one million strong. Today, the communities are marginalized and in some ways considered outlaws. During the late 1980s, the Royal Thai Government decided to relocate the hill tribes, claiming their traditional practice of slash-and-burn agriculture was responsible for destroying national forests. It wasn’t the first time government policy had led to the resettling of farmers in the lowlands.

Some, however, decided to stay, hiding out in the forests. With their traditional way of life disrupted, many opted to ride motorbikes into the city of Chiang Rai to work in factories and markets. This was evident as we climbed deep into the mountains to visit the Karen tribe in the village of Wawi. Motorbikes, sometimes carrying three or four individuals at a time, careened down the hills at break-neck speed towards the city below.

An agricultural people by nature, the hill tribe communities grow maize, rice, coffee and tobacco. They also raise livestock. But agriculture is not enough and communities suffer as a result. Earning, on average, US$150 per month, they live well below the poverty line. This forces them into unsavoury alternatives, like human and drug trafficking, or into migrating to cities, abandoning their way of life in the mountains.

While we put on our biosecurity boots, the managers explained how the organization works. Contracted farmers, Kamthep said, are supplied with all necessary inputs, including young chickens, feed and farmer training.

Hilltribe Organics guarantees a market for the farmers and they are paid a fair and predictable price when the company buys back the eggs. The farmers, of whom 50 per cent are women, are responsible for covering the cost of henhouses and labour. If money is an issue, the organization offers interest-free loans that can be paid back either in cash or through the purchase of eggs. Once the loan is paid back, farmers, on average, make US$350 per month. Typically, it takes no more than a few months to pay back the loan.

To date, Hilltribe Organics has employed 26 local workers and 44 hill tribe families. By the end of 2017, their goal is to work with 200 families. The project is making an obvious impact. Abu, one of the organization’s first Akah farmers, was about to leave his family to find work in the city and put an end to his children’s education.

Costs were simply too high. During his first year with Hilltribe Organics, Abu earned US$7,000. He was able to send his kids to school and now sees a future in living on his ancestral land.

In the village of Wawi, Wiyada Pinidkam, a young mother, operates her own farm, and Deekum and Temdong Sanchareananurak have found success in the program as well. Both families applied to Hilltribe Organics’ program and were selected after the organization conducted a series of interviews and background checks.

The organization asked them to sign a contract, which stipulated payment and details on deliverables. Following that they were offered one month of training before the hens arrived, 650 in total for each family.

The hens are fed 100 per cent organic feed, sourced from locally contracted farmers. Participating farmers receive the birds at 16 weeks old, raising them to 85 weeks. After 85 weeks, they are sold as meat. The chicks receive a suite of vaccines, approved under organic standards. Farmers collect the eggs twice per day, delivering them to one of the local packinghouses, often on the back of motorbikes.

Entering the organic, free-range market offers more room for growth, Dietrich explained in his talk, since the sector currently accounts for less than one per cent of the total egg market.

Overall, the organic food market is expected to grow at an annual rate of eight per cent in the Asia-Pacific region over the next five years. Raising the hens organically fetches farmers a higher price for the eggs they produce.

Hilltribe Organics sells the eggs to consumers through two distribution channels: retail and food services, and export markets. The retail players are the leading premium to mid-market supermarkets, whereas the food services channel consists of hotels, resorts and restaurants. The organization plans to export to Hong Kong in the near future.

Can eggs make a difference? Dietrich says they can. By empowering farmers through training and free financing, Hilltribe Organics helps farmer families receive a stable income, which in turn supports their local community. Furthermore, the farm operations not only make sustainable, long-term improvements to the families’ livelihoods, but also to the surrounding environment.

Hilltribe Organics is a social enterprise that was developed out of the Young Presidents’ Organization (YPO) Catapult Social Entrepreneurship Program in 2012. It was founded by four Asia-based entrepreneurs – Arvind Narula, Richard Blossum, Markus Dietrich and Marc Castagnet – with the goal to increase the quality of life of indigenous hill tribe communities in the northern region of Thailand through the production of high-value agricultural products.