What Happens on a Turkey Farm?

What Happens on a Turkey Farm?

There’s a bunch of turkeys following Brent Royce around that think he’s a movie star and they may just be right. 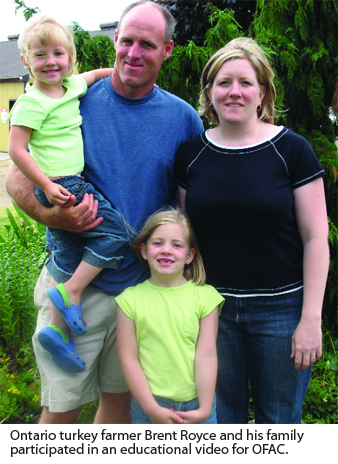 There’s a bunch of turkeys following Brent Royce around that think he’s a movie star and they may just be right. Brent and his family and birds have just wrapped up filming clips for a new Ontario Farm Animal Council poultry virtual farm tour video that is scheduled for release in August 2007.

The Royce family farm was the 17th stop in the filming tour for farm production videos that will appear on the OFAC website, www.farmissues.com.  The poultry videos for layers, broilers, turkeys and ostrich will join the library of online resources that already feature beef, sheep, hog, veal, dairy, goat, deer and elk production videos that went online in 2006. The website has proven to be popular: there were 63,000 visitors and 2.5 million hits last year.

Brent and his wife Christa raise 40,000 turkeys a year at their family farm near Listowel, Ont. He’s always been interested in educational projects and when he came to OFAC to offer his help with the video tour, OFAC Project Manager Kelly Daynard was quick to grab the opportunity.

Brent was motivated by his interest in education and in the video production end of things and, looking back, he says that the whole project wasn’t as intense as they thought it would be. There were two initial visits where the production crew provided the family with coaching and overviews of the filming process, and took still photos of the farm. He says that all the farm needed was a good general tidy up that needed to be done anyway. After all, he’d probably do it over again.

On top of the usual fieldwork that’s all part of the normal life on the farm, the birds had just come in the day before so when it came to the big day both Brent and Christa were a mixture of tired, nervous and excited. Their daughters Hayleigh, aged 6, and Emily, aged 4, enjoyed missing school for the day to be “movie stars,” although their father says they had a hard time sitting still for long.

Brent says the new turkeys were an active lot but the laid back, low-key approach had them all settled down in no time, with the birds quite happily following Brent and the two-person film crew around the barn. The barn didn’t need any extra lighting so that also helped to keep the birds from getting stressed.

It took a little over three hours to do the video on the day of the shoot. Brent explained that the farm basically provided a site as a backdrop to answer production questions, and although they didn’t rehearse a script he says he stayed relaxed with some good coaching, knowing that he could rattle off a long answer and any hesitating ‘ums’ and ‘ahs’ would be edited out.

OFAC Chair Crystal McKay explained that the videos are part of a larger virtual tour site that is used by the general public and teachers as an information resource: as the number of people entering barns is getting smaller the videos are helping to dispel the “hiding something” myths that surround animal agriculture. They are directed at teachers, the general public and media to provide basic information about farming.

The layer tour was sponsored by Egg Farmers of Ontario and features the farm of Adam and Danielle West. The turkey tour was sponsored by the Canadian Turkey Marketing Agency while Wallenstein Feeds, in the largest ever business donation to an OFAC project, sponsored the filming at the broiler farm of William and Janet McCracken.

OFAC Program Manager Kelly Daynard was particularly pleased with the agri-business support: “the gratifying thing was that Rick Martin of Wallenstein Feeds heard about our project and came to us asking if we needed funds to do a broiler farm. This was a fabulous show of support from the industry.”

Martin says he was glad to offer their sponsorship to help to educate the next generation, one that too often believes that food just shows up magically in the store. “Consumers don’t have a good feel for how anything is produced. They have no farm connection, no idea where it all comes from.” The video will be on a link on the Wallenstein Feed homepage and Martin encourages other industry partners to point people to the OFAC website through links as well. “Kids now google the Internet,” said Martin. “If you’re not out there you don’t get your story out.”

The four new farm tours are scheduled to be live at www.farmissues.com in August 2007. Future plans include posting the video clips on YouTube as well as putting the entire virtual farm website on DVD so that teachers and others can retrieve the information without needing Internet access. n