World of Water: What is that stuff on my filter?

How poultry producers can get the most out of their water filter. 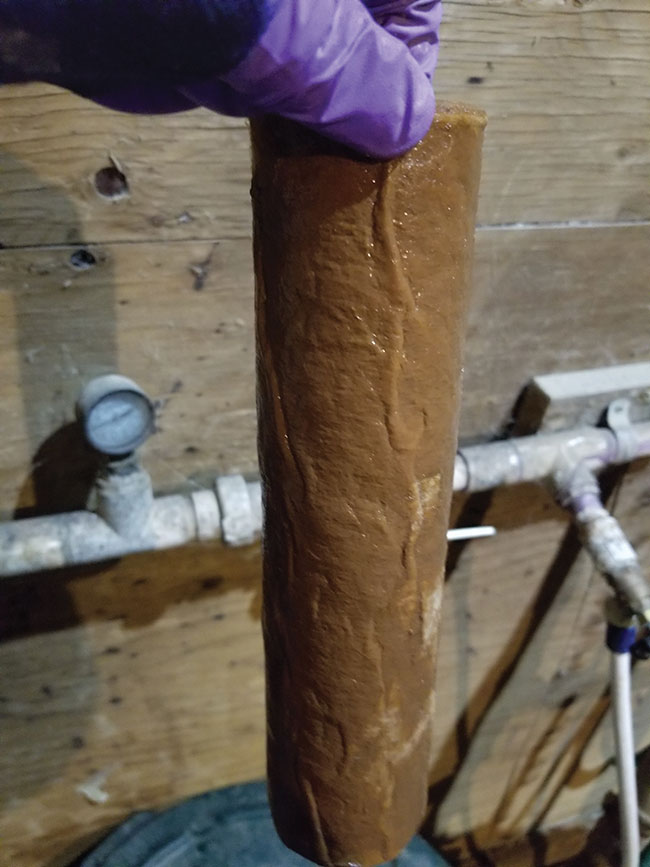 Completely clogged filters like this no longer have the ability to filter out additional minerals that are entering the system. PHOTO CREDIT: Mary Foy.

Oh, the lonely life of the little water filter in the workroom. We pass by it day after day watching it get darker in colour and occasionally wondering when we should change it out for another pristine white one. It plugs away doing its job without fuss or complication.

What, exactly, is it doing, though? Are you using it to its most efficient level? What the heck is that orange coating that gathers on the filter? Why is it slimy sometimes? The basic answer to “what is it doing” is that it is filtering minerals and large particles out of the incoming water (it does not filter out bacteria). This little workhorse can actually be a big help to a grower once they know what they are looking for on the filter.

Why are we interested in removing these minerals in the first place? An overload of minerals in our watering systems can impact performance through three major paths:

Sulfur is one that is hard to miss – it usually smells bad and is black with a little bit of slime on the filter. The sulfur itself can irritate a bird’s intestines, but the more detrimental result of having sulfur in the well is that there are numerous bacteria that can use it as an energy source.

That brings us to the second path in which minerals can affect bird performance: promoting bacterial growth. Elemental sulfur is actually yellow in colour. The sulfur we usually find on the filter is black and slimy. That is actually sulfur that has been broken down by bacteria.

The easily recognizable “rotten egg” smell is hydrogen sulfide gas, a by-product of the bacterial growth. The black slimy stuff on the filter that smells like rotten eggs not only indicates there is a mineral issue with the sulfur, but also that there is a bacteria issue that will now move to the birds.

This is also true of the iron that most of us, at one time or another, have encountered. Sure, we all know how it turns everything orange, especially the filter, but there are a few other issues with having high iron. One issue is that it tastes bitter. Large amounts of iron in the system can cause the birds to drink less water than they should. Iron is another mineral that the bacteria can live off of. E. coli is notorious for using iron as a sole source of food.

Also, iron is a perfect example of the third pathway that minerals can take to have a detrimental impact on the performance of our birds: equipment issues. Iron and calcium are two of the more common minerals that leave mineral “scale” in our water systems. This mineral scale can seal over the drinkers,  making it almost impossible for a bird to have the strength to trigger it. This is especially true for our chicks. They simply do not have the strength to crack open a mineral-sealed drinker.

Also, instead of sealing a drinker shut, mineral scale can build under the lip of a drinker and keep it open, causing wet floors. On top of all this, the mineral scale that builds up in a water line is an ideal environment in which all kinds of living organisms thrive. They are protected down deep in the ant farm-like cavities of the mineral scale from most water treatments.

Besides collecting minerals from the source, the filter can also indicate that the well pump is sitting too low or that there has been a change in the aquifer. A sudden buildup of clay, sand or silica can all be indicators that the water source or the pump needs some attention.

So, the next time you pass by that lonely little filter, take a minute to really check it out and see if it has some information to share.