Why Canadian duck producers are thriving despite challenges. 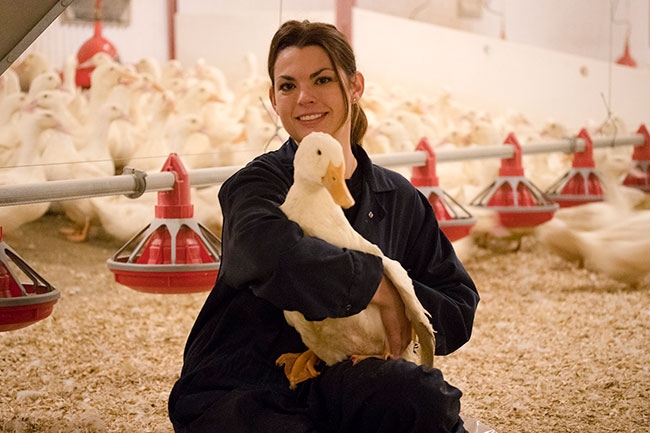 Pictured is a Brome Lake duck barn. The company, which was founded in 1912, aims to launch several new products each year. CREDIT: Fraser Valley Specialty Poultry

Duck is succulent and rich. It’s also something a little different but not too different. What’s more, new, exciting and convenient products are making it more accessible all the time. Indeed, duck products now go far beyond whole roast duck.

These days, you’ll find duck sausage, smoked breast, confit, potpie, wings and many ready-to-serve products on both grocery store shelves and restaurant menus. The most commonly produced breed is the Pekin, which is best from the standpoints of meat production, economics and taste.

First, let’s take a look at where most duck is produced in Canada. There are currently three large producers, each with a long and interesting history.

Later on, to prevent it from being turned into a garment factory, a Canadian senator named George Foster and a few associates bought the farm. It continued operation, taken over in 1939 by Foster’s son and another businessman, then passed to two of Foster’s granddaughters. Brome Lake currently produces three million ducks a year on 12 farms spread between Quebec and Ontario, a threefold increase from 20 years ago.

The company’s exports have stayed steady at a little less than 20 per cent of total sales, mainly to the U.S., Mexico and Asia. The rest are mostly retail and some food service.

“Traditionally in Canada, duck has been for the Asian market,” says Bruno Giuliani, vice-president of sales and marketing, “but since 2003 we have worked hard to introduce it into the mainstream. At the retail level, we do in-store demos, roadshows, flyer promotions and also media, especially TV commercials in Quebec, and recipes on our website.”

The firm tries to launch several new products every year, and in the last few years, products with staying power have included breasts, potpies, confit legs and rendered fat.

“Rendered fat is used for cooking as it’s flavourful and a healthier fat than butter or any other animal fat,” Giuliani explains.

Ninety per cent of Fraser Valley duck stays inside B.C., as its main processing plant is provincially licensed. That said it also works with a federal processor to supply some customers in other provinces.

General manager Joe Falk says market demand and company growth has increased over the past 20 years, but due to foreign imports during the last five years, recent growth has stalled. “We are seeing a higher demand certainly from the white tablecloth restaurant in the mainstream sectors. We are also seeing an increase in demand as the Asian population increases, as well as foodies who are interested in trying something new,” he says.

The firm has added duck sausage, pepperoni and smoked breast to its offerings. “They have been tremendously successful,” Falk says of the additions. “Customers are generally hooked once they sample.”

King Cole Ducks
Canada’s third-largest duck producer, producing 2.5 million a year, is King Cole Ducks in Stouffville, Ont. It is a third-generation family owned operation that started in 1951, with the main farm in Newmarket. According to Patti Thompson, vice president of sales and marketing, over the years the farm business has expanded to 13 other additional farm properties and 140 staff. Its products are sold in retail, restaurants, resorts, hotels and cruise lines in Canada and around the world.

Production has increased 60 per cent over the last 20 years, with 20 per cent of that occurring in the last five years, due to an increase in exports (about 30 per cent of total sales), the growth of the Asian-Canadian population and increasing mainstream interest in duck.

“A big impact on our sales is our focus on value-added products and a transition away from commodity markets,” Thompson says. “We have added a development kitchen and cook plant in the last 10 years and we are creating fully cooked products that are consumer-friendly.” King Cole now offers products such as Korean smoked duck, confit legs, Speidini’s (breast cube kabobs), burgers, salami as well as spring rolls.

Pictured is a Brome Lake duck barn. The company, which was founded in 1912, aims to launch several new products each year.

Industry challenges
Brome Lake cites maintaining disease-free flocks as its biggest challenge. Giuliani says some biosecurity risks come from small producers with flocks with access to the outdoors. “We have a strong biosecurity program and use no antibiotics,” he notes. “We are vertically integrated, which means we are our own supplier, so we have to do it right from beginning to end.”

For Fraser Valley, Falk says the biggest challenge these days is the uneven playing field: duck imported into Canada does not have to meet the same welfare, environmental and food safety standards as Canadian ducks.

While Fraser Valley is not actively pursuing supply management for duck, Falk says, “It would be very helpful for us as a relatively small industry in Canada to have some form of import controls, live pricing mechanisms and the ability to manage production. This assures Canadians are receiving the best quality products, raised by Canadians who share their values.

“The biggest factor in this is to have import controls, or at the very least expect that our government would do its job in ensuring ethical trade. Canadian consumers are unaware that imported duck may have been raised using veterinary medicines not approved in Canada, may have been involved animal welfare atrocities, abhorrent treatment of workers and possibly even a complete lack of meat inspection at all.”

King Cole’s Thompson also lists competition with foreign markets as a major challenge. “Imports from countries that do not have the same food safety, humane handling and environmental standards (standards that make cost of production much higher) make it hard to compete,” she observes. “There is no supply management in our sector; energy costs, taxes and labour rates make it difficult for all Canadian businesses. For example, some importing countries have wage rates under two dollars per hour.”

She notes that as a small niche industry that has a significant capital infrastructure and costs associated with operating, “we need to be lean to stay competitive.” Company leadership feels it’s extremely important to be fully integrated, as that allows full control of many critical and sensitive areas of the business, such as food safety and animal welfare.

With very little published information about ducks, King Cole learns a great deal on an ongoing basis through its own research. “We are always running trials to develop better techniques and processes,” Thompson says.

“Product development is done through our development kitchen and is driven by market trends or where we determine there are gaps in the market place.”

What’s to come
The future of Canadian duck seems very bright. Thompson predicts King Cole Duck sales will continue to grow at a moderate rate in the coming years. Giuliani reports that for Brome Lake, “we think the retail and food service markets still have room to grow, and we anticipate 20 to 25 per cent growth a year. We are sure, with marketing and education, there will be more and more demand.”

Brome Lake is well prepared for that. Its new processing plant is 51,000 ft2 and can handle five million ducks per year (up from its current three million). For its part, Fraser Valley anticipates growth in both retail and food service markets.

Are you seeing more Canadian duck products at restaurants and grocery stores? Canoe, a Toronto-based restaurant famous for its Canadian focus, always seems to have duck on the menu. Right now, you can order a ginger-cured duck egg-duck prosciutto salad with soy garlic dressing, or an entrée of tea-smoked duck breast with radicchio, duck liver mousse, parsnip and poached Niagara pear.