What to do When Faced with Activism 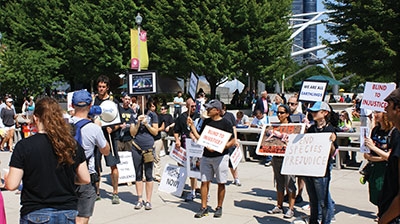 Activists hold poster-making parties and organize carpooling to protests, finding strength in a sense of community. Campaigns have widened to include lobbying retailers, government and large food business customers

What would you do if Mercy for Animals released a video taken in your barn? How would you react? You can guarantee the video would be hard to watch —that’s the whole point: to generate an emotional response from viewers.

There are resources available to help you prepare for such an event, people that can work with you to reduce the chances of your farm being on the evening news and to deal with the fallout after the fact.

Lisa McLean is with The Ag & Food Exchange, a national specialized service designed to help farm and food businesses manage special interest group pressure. While she can’t make the activists go away and she doesn’t condone poor animal welfare practices, she is part of a team that can help to prepare for an activist-related incident, giving you the resources to make more effective decisions.

That team, known as “AFX,” monitors trends, watches for pressure points, and provides guidance on dealing with sensitive issues impacting agriculture and food in Canada.

“Animal rights doesn’t mean animal welfare,” McLean told delegates at the 2014 Farm & Food Care Annual General Meeting, “They don’t want us to use, eat or own animals at all. That makes farmers a prime target.”

Activists now come dressed in suits, not just Birkenstocks. They hold poster-making parties and organize carpooling to protests, finding strength in a sense of community. A few are willing to break the law. Activist coalitions are widening their campaigns — they support each other, staging protests and publicity stunts. Their lobbying targets retailers, government and large food business customers.

Take Toronto Pig Save, for example. It started as one woman standing with a sign outside Quality Meat Packers in Toronto, said McLean. Their mission statement on their website now reads, “to build a democratic, mass-based, grassroots movement to bear witness of animal suffering, end the animal emergency, and create a world of animal equality and animal sanctuaries. We use a love-based approach…” The group now holds weekly vigils “to bear witness of chickens, cows & pigs being sent to slaughter.”

The “Save” movement has grown internationally to include Toronto Cow and Chicken Save, Golden Horseshoe Farm Animal Save, Waterloo Wellington Animal Save, Windsor Pig Save, Brampton and London Chicken Save, Montreal, Manitoba and Brandon Pig Save as well as chapters in the U.S., Australia and Brazil. Notices such as this one on their Facebook page alert over 3,600 followers of upcoming strategy: “The World Day for Farmed Animals on Thursday, October 2 will be held at Maple Leaf Poultry at 100 Ethel Street in Toronto (a change in location from Brampton’s Maple Lodge “Farms”) due to logistics and also the hope of getting more people out and more media attention.”

One familiar tactic of animal rights activists is the use of undercover videos. Some have exposed employee indiscretions while others depict housing systems and production methods that can easily be misunderstood by the non-farming public, leaving farmers to be judged by the general public jury. The undercover employee behind the camera is typically your best employee, said McLean, discreetly working for a few weeks to gather enough video to edit and direct into a campaign of public shaming of animal production.

A video doesn’t just affect the farm; it chips away at the integrity and trust surrounding that industry sector as well as the rest of agriculture. “Activism is a business threat,” said McLean, and once a video is aired, it’s not over; the video will re-surface again and again, along with public pressure campaigns against that sector.

AFX is a service that can help farmers deal with activists. They monitor pressure points and issues; provide guidelines, produce reports and resources, and help clients to prepare for and deal with actions against them. “When emotions are high and you don’t know what to do,” said McLean, “we’ll walk you through it.”

There are different levels of service, ranging from membership that gives you access to weekly activist activity and background information so you know what to expect. AFX won’t speak on your behalf but they will co-ordinate with your public relations or issues management team, or provide guidance and monitoring about upcoming actions. Services start at $2,500 annually.

What can you do on your own farm? “Keep doing the right thing and telling people about it,” says McLean. “Have, use and enforce an animal care code of conduct. Make sure it outlines your expectations to employees and have employees sign it,” As well, ensure all employees receive training in proper handling of animals and familiarize them with company policies. As she says, “Mean what you say and do the right thing, because it is the right thing to do.“

One thing is for sure: you can’t just park a tractor across the end of your laneway and make it all go away. For more information on AFX, email info@agandfoodexchange.ca